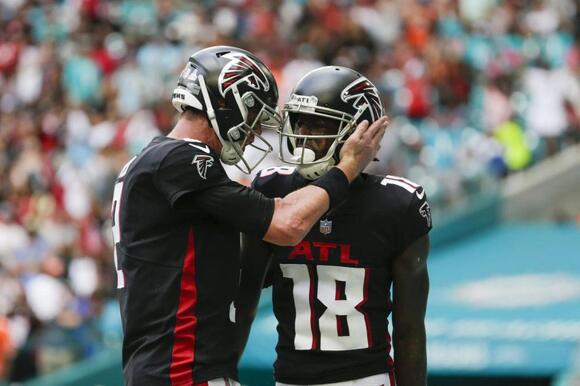 After just five games this season, star Atlanta Falcons wide receiver Calvin Ridley left the team for personal reasons . It was extremely surprising given his status as the team’s No. 1 wide receiver following the off-season trade of Julio Jones.

There has not been a whole lot from Ridley or the Falcons regarding this situation since his abrupt departure. However, recent reports suggest that the Falcons are likely to trade the former Alabama star at some point during the spring.

Atlanta is up against the 2022 NFL salary cap. It is set to retain longtime quarterback Matt Ryan and has other holes to fill. As for Ridley, he seemingly wants a new start elsewhere. Below, we look at five ideal trade scenarios for the former 1,300-yard receiver.

No. 2 Chargers wide receiver Mike Williams is slated to hit free agency in March. The former first-round pick from Clemson has gone from being an injury-plagued enigma to producing at a high level with Justin Herbert tossing him the rock. This past season saw Williams put up 76 receptions for 1,146 yards and nine touchdowns. This could have potentially priced him out of the Chargers’ range.

A cheaper alternative would be to acquire Ridley to team up with Keenan Allen moving forward. It would still make for an elite one-two punch for Herbert.

Atlanta acquires a valuable second-round pick in this deal as the team looks to revamp on the fly under its second-year front office group. It also picks up a backup quarterback for Matt Ryan in the 26-year-old Stick who has shown flashes during the preseason.

Kansas City has that elite force in electric wide receiver Tyreek Hill. It also has one of the best tight ends in football, Trevis Kelce. These are two huge targets for former NFL MVP Patrick Mahomes . The issue here for these Chiefs is that they have not had a true No. 2 option. Hardman has been the closest to reaching that level (693 yards during regular season), but he leaves a lot to be desired .

With Chiefs general manager Brett Veach being extremely active on the trade block (Frank Clark, Orlando Brown Jr.), it would not be a shock if he went in this direction again. The cost? Hardman and a second-round pick in the 2022 NFL Draft. For Atlanta, teaming Hardman up with stud young tight end Kyle Pitts would be a coup.

New York had hoped free-agent signing Corey Davis would be a top-end target for rookie quarterback Zach Wilson this past season. It did not happen. Davis missed seven games to injury — accumulating just 34 receptions for 492 yards in the process. To say New York needs more outside help would be an understatement. Ridley makes perfect sense next to stud young slot guy Elijah Moore, too.

In this scenario, Atlanta acquires an early second-round pick to help in its rebuild. Given Ridley’s situation, the team likely can’t demand much more than that. It’s also a valuable pick in that teams tend to pay a high priority for early Day 2 selections — meaning Atlanta could turn this into multiple future picks.

There’s no telling whether Davante Adams will be back with the Packers next season. A lot of that hinges on the future of disgruntled quarterback Aaron Rodgers and how far Green Bay goes in the NFL Playoffs. What we do know is that rumors continue to persist that he could look to go elsewhere and even force a trade should Green Bay place the franchise tag on the game’s most-prolific receiver.

Now, we know that Ridley is nowhere near the same level of a receiver as Adams. It’s also not known what the Packers would do if Rodgers forced his way out. Even then, the team would need to find a legitimate starter-caliber receiver for whoever is under center. At 27, Ridley is just now entering his prime.

Related: Everything you need to know about the NFL season, off-season calendar

New England did pretty darn well with its free-agent signings at wide receiver last offseason. Kendrick Bourne and Nelson Agholor combined for 92 receptions, 1,273 yards and eight touchdowns. However, they don’t have a legitimate No. 1 option for young quarterback Mac Jones . As evidenced in the Patriots’ blowout loss to the Buffalo Bills in the AFC Wild Card Game, that’s a need this offseason.

In return, Atlanta takes a chance that Harry can turn things around after the first-round pick struggled in three seasons with the Pats. It also picks up two draft picks — something that would be a necessity when it comes to any type of a retooling process in Atlanta.

The upcoming Denver Broncos sale is going to set a record for the most money ever spent to buy a
DENVER, CO・2 DAYS AGO

Two weeks after an arrest warrant was issued against Earl Thomas, the former All-Pro safety was arrested on Friday in
ORANGE COUNTY, TX・2 DAYS AGO
Sportsnaut

The college football rankings are the bottom-line determination of a team’s fate. Beginning with the Associated Press and coaches polls, and followed by the College
CINCINNATI, OH・22 HOURS AGO
Sportsnaut

Bookmark. Save. Favorite. Do your thing. This is the one-stop-shop for everything NBA schedule-related heading into the 2021-22 season: Related:
1 HOUR AGO
Sportsnaut