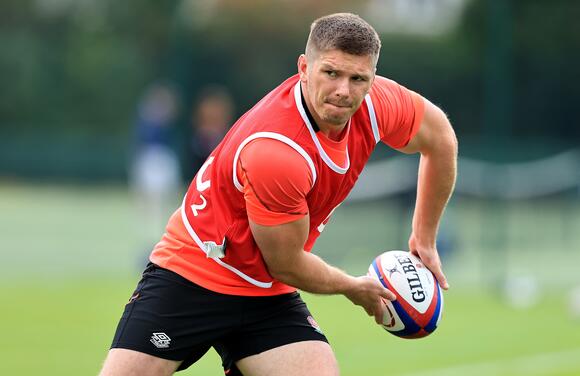 Owen Farrell has been backed by Eddie Jones to make a successful comeback from ankle surgery in time to lead England into the Six Nations.

Farrell has been retained as captain despite being sidelined since limping off against Australia last autumn with Saracens’ Challenge Cup clash with London Irish on Sunday earmarked for his comeback.

Testament to Jones’ loyalty to the 30-year-old playmaker is that he will be given every opportunity to prove his fitness for the opener against Scotland at Murrayfield on February 5.

In contrast, Sam Underhill and Elliot Daly have been left out of the 36-man training squad due to their injury-disrupted seasons – yet both have played significantly more than the inactive Farrell.

The expectation is that Marcus Smith will start at fly-half with Farrell positioned at inside centre as George Ford continues his spell in international exile despite his outstanding form at Leicester.

“We believe Owen can get into his best form very quickly and we believe he will be right to play against Scotland,” Jones said.

“We are hopeful he’s going to play this weekend. He has got a good training week with us next week and we will know whether he is right to play. We will just have to wait and see how he goes over the next couple of weeks.

“If he’s fit and eligible for selection, he will captain the team. If he’s not then we will make an adjustment to that.”

When asked why Farrell was picked when Underhill and Daly were overlooked, Jones replied: “Every player is treated differently – that’s the rationale.

“We just make a judgement on each player. Selection comes down to a judgement.”

The number of 2019 World Cup finalists culled from England’s squad as Jones continues his team rebuilding now stands at five with Ford, Daly and Underhill joined by the Vunipola brothers in being frozen out.

Manu Tuilagi will be managed carefully as he closes in on a comeback from the hamstring torn against South Africa in the autumn and Jones declined to give any assurances that he would be involved in the Six Nations.

But Jack Nowell could be in line to make his first appearance since Japan 2019 after overcoming a dreadful series of injuries, in the process giving up alcohol and over a stone in weight to enhance longevity.

“Jack definitely looks more like a rugby player and less like a bodybuilder. As you get older, you have to train differently,” Jones said.

“For our experienced players, that’s the challenge they have had. Sometimes habits of young players don’t suit you as you get older and I think Jack has made a really good adjustment. He’s got the bounce back in his step.

“Watching him play on Saturday night for Exeter against Glasgow, he was bouncing out of tackles, he had huge workrate, huge appetite for the ball. That’s the sort of player we remember.

“We have not really seen him since 2018. It has been a long time between drinks! Maybe him not drinking so much will allow the times between drinks not to be so long in the future.”

A year on from her Olympics disappointment, Beth Mead is preparing for a home Euros feeling she has been in the finest form of her career – and can produce even better.The Arsenal winger was among the notable players not included by Hege Riise in the Great Britain squad for last summer’s Tokyo Olympics.Mead has bounced back in some style, going on to register 11 goals and eight assists across Arsenal’s 2021-22 Women’s Super League campaign and score 12 times in 10 England appearances.Having earlier this week been confirmed as part of the Lionesses’ provisional squad for this summer’s Euros...
WORLD・2 HOURS AGO
The Independent

Craig Overton claimed his 400th first-class wicket as Somerset rallied against Hampshire at Taunton.Overton claimed the scalps of Felix Organ, Ian Holland and James Vince as Hampshire closed on 144 for five in their LV= Insurance County Championship Division One clash.The England seamer ended the day with three for 21 from 18 overs, with his side leading by 67 runs at stumps.A beauty from @craigoverton12, his 4️⃣0️⃣0️⃣th in first-class cricket 🍒Watch LIVE: https://t.co/cjz25b61pE#LVCountyChamp pic.twitter.com/MbqPNFGr7B— LV= Insurance County Championship (@CountyChamp) May 20, 2022No play was possible before lunch because of a wet outfield, but Holland, with 49 from 111 balls, was...
SPORTS・1 HOUR AGO
The Independent

Leeds and Burnley have written to the Premier League claiming that Everton have seriously breached financial rules.The two clubs sent a joint letter to the League on May 13 asking for an independent commission be set up to investigate the matter within six weeks of their correspondence.Leeds and Burnley have threatened to bring a claim for substantial damages against the Premier League and Everton after the Merseyside club recorded losses of £371.8 million over the last three years.The Premier League’s profit and financial sustainability rules allow clubs to lose a maximum £105m over a three-year period or face sanctions, which...
PREMIER LEAGUE・3 HOURS AGO
The US Sun

THE terrifying spate of pitch invasions and assaults on players must be crushed by football bosses and clubs. Jubilation is understandable after tense and crucial games at the climax of the season. But a hardcore of fans, drunk, coke-fuelled or both, have lost the plot. The headbutting of Sheffield United...
SOCCER・26 MINUTES AGO