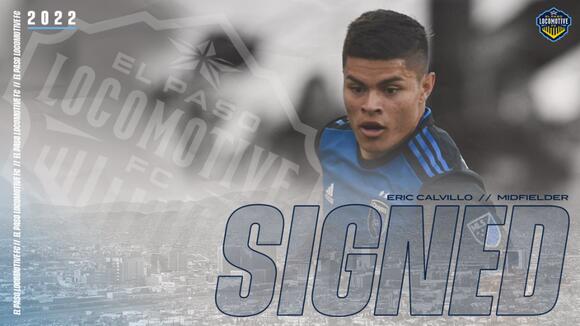 “Nick Hinds is a player who I have worked with previously in Seattle,” said El Paso Locomotive Head Coach and Technical Director, John Hutchinson. “He is a technical footballer that can cover any position on the left side. He has an ability in wide areas which is something we have been looking for. We’re excited to have Nick on our roster.”

Hinds played the 2021 USL Championship season with Austin Bold FC while on loan from MLS Club Nashville SC. In Austin, the Jamaican defender, was a mainstay left-back for the Bold, making 25 appearances while recording a goal and an assist.

Prior to his time with Austin Bold FC, Hinds played in the Seattle Sounders FC Academy, before playing collegiately with the Zips from the University of Akron in Ohio. Hinds found massive success with the Zips, reaching back-to-back conference championships while recording 11 goals in 44 appearances.

Following his college career, Hinds rejoined the Sounders, where he played for Tacoma Defiance, making 68 total appearances while recording a goal.

El Paso Locomotive FC’s roster as it currently stands for the 2022 USL Championship season is below, listed alphabetically by position:

Club officials remind fans that El Paso Locomotive FC kicks off its fourth USL Championship season against Sacramento Republic on the road on March 12 and will be broadcast live on ESPN+.

The Locos return to Southwest University Park a week later on March 19 for its 2022 season home opener against New Mexico United.

For the latest news, weather, sports, and streaming video, head to KTSM 9 News.

EL PASO, Texas (KTSM) – Former UTEP basketball star Kent Lockhart died on Jan. 28 at the age of 59. Lockhart played for UTEP from 1981 to 1985. Those teams were coached by the legendary Don Haskins. Lockhart played in two NCAA Tournaments with UTEP. Lockhart is 10th all time at UTEP in career assists […]
EL PASO, TX・4 HOURS AGO
KTSM

EL PASO, Texas (KTSM) – For the seventh time during the 2022-23 season, Ricardo Pepi found the back of the net for FC Groningen. Trailing FC Volendam 2-1 in the 73rd minute, Pepi got on the end of a great build-up and rocketed home the equalizer with his right foot. However, FC Groningen would give […]
EL PASO, TX・1 DAY AGO
KTSM

MISSION, Texas (ValleyCentral) —A probable cause affidavit provided new details in the arrest of an IDEA teacher in Mission. Karen Sosa, 27, was arrested Jan. 19 on charges of improper relationship between an educator and a student, Hidalgo County Jail records show. According to a probable cause affidavit obtained by ValleyCentral, an officer was dispatched […]
MISSION, TX・2 DAYS AGO
KTSM

One of the twin infants rescued during a statewide Amber Alert search in Ohio last month has died, police said.
COLUMBUS, OH・1 DAY AGO
KTSM

An El Paso police officer fired his weapon and shot a dog that was being aggressive toward people after two dogs reportedly had bitten two people along the 12400 block of Tierra Limon.
EL PASO, TX・1 DAY AGO
KTSM

Teen arrested after allegedly sending 2 others to hospital in assault

EL PASO, Texas (KTSM) — Police are investigating an aggravated assault in Northeast El Paso that happened Saturday morning. At 8:28 a.m., El Paso Police responded to a call of an aggravated assault that had just taken place at the 10000 block of Caribou. A 15-year-old teenager suffered serious injuries and was transported to a […]
EL PASO, TX・2 DAYS AGO
KTSM

Video from a witness and footage from cameras over the interstate show the car being dragged down the highway. The truck was eventually stopped eight miles down the road.
OVERLAND PARK, KS・2 DAYS AGO
KTSM

EL PASO, Texas (KTSM) – El Paso police and Crime Stoppers of El Paso are seeking your help in finding the person or persons responsible for a road rage incident that left a man dead in East El Paso. It’s this week’s Crime of the Week. On Feb. 18, 2021, 39-year old Jose Guzman was […]
EL PASO, TX・11 HOURS AGO
KTSM

UPDATE: The road closure of U.S. 82 outside of Cloudcroft will continue for another night, the New Mexico Department of Transportation announced. The official detour route is NM Hwy 244 and US Hwy 70. Cloudcroft, NM (KTSM) — US 82 is blocked in both directions Saturday morning from milepost 2 to milepost 8 due to […]
CLOUDCROFT, NM・2 DAYS AGO
KTSM

EL PASO, Texas (KTSM) – It’s been a tough week and a half  for one West El Paso business. Friday night, a fire broke out at the Valley Super Market store at Redd and Resler. No  injuries were reported and the fire was quickly extinguished. Initial  reports say it was an oven fire, but fire […]
EL PASO, TX・1 DAY AGO
KTSM

‘It was horrific’: 1 dead, 4 injured at hookah lounge shooting in northwest Austin

Ford announced an international recall of more than 400,000 vehicles over a video output issue that keeps the rear view camera from displaying while backing up.
3 DAYS AGO
KTSM

MEMPHIS, Tenn. (WREG) — Memphis Police say officer Preston Hemphill has been relieved of duty for his involvement in the confrontation with Tyre Nichols. Hemphill, hired in 2018, is the sixth officer implicated in the fatal beating of Nichols. Five other officers were fired and have been charged with second-degree murder. According to MPD, Hemphill […]
MEMPHIS, TN・18 HOURS AGO
KTSM

Why parents may see a smaller tax return this year

If inflation wasn't bad enough, it's shaping up to be a year of disappointing tax refunds for many people, perhaps especially for parents.
2 DAYS AGO
KTSM

To determine the cream of the heavy-hauling SUV crop, iSeeCars looked at the best SUVs for towing over 6,000 pounds.
1 DAY AGO