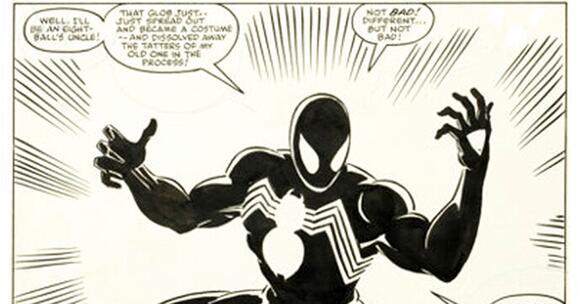 DALLAS (AP) — A single page of artwork from a 1984 Spider-Man comic book sold at auction Thursday for a record $3.36 million.

Mike Zeck’s artwork for page 25 from Marvel Comics’ “Secret Wars No. 8” brings the first appearance of Spidey’s black suit. The symbiote suit would eventually lead to the emergence of the character Venom.

The record bidding, which started at $330,000 and soared past $3 million, came on the first day of Heritage Auctions’ four-day comic event in Dallas.

The previous record for an interior page of a U.S. comic book was $657,250 for art from a 1974 issue of “The Incredible Hulk” that featured a tease for the first appearance of Wolverine.

Also Thursday, one of the few surviving copies of Superman’s debut, Action Comics No. 1, sold for $3.18 million, putting it among the priciest books ever auctioned.

None of the sellers or buyers were identified.

M.S. Rau Celebrates the Next Generation of NOLA Artists

Sometimes art can have a message.
NEW ORLEANS, LA・15 HOURS AGO
TheStreet

Once again, Disney (DIS) - Get Walt Disney Company Report is finding itself embroiled in a political quagmire owing to its support of the LGBTQ community, after Florida Gov. Ron DeSantis punished Disney for denouncing his “Don’t Say Gay Bill,” by seeking to revoke Disney World’s designation as a special tax district (which as we pointed out, is ultimately a meaningless gesture).
FLORIDA STATE・20 DAYS AGO
Hello Magazine

Princess Eugenie has taken to her Instagram Stories to make an exciting announcement related to The Anti-Slavery Collective, which she co-founded with her best friend Julia de Boinville back in 2017. Resharing a message from the charity organisation, the mother-of-one revealed she was posting "news from my charity". WATCH: Princess...
CELEBRITIES・20 DAYS AGO

Netflix has canceled another one of its major shows, with this one getting the ax after only two seasons. Variety reports that hit sci-fi drama Raising Dion has been dropped by the streamer, following its recent season debut. The news seems to have been revealed by series star Sammi Haney, who shared the news with fans on Instagram. "Sad to say that Raising Dion is CANCELED [sic] Thank you for all of the amazing support we got from all of our wonderful fans!" Haney wrote, in part. "Season 2 was a success, equal to Season 1, even if just looking at how many people watched all of it and wanted a season 3!"
TV SERIES・20 DAYS AGO
People

Megan Fox wants her kids to express themselves however they please. In a wide-ranging interview with Glamour U.K. for their April cover story, the 35-year-old actress opens up about how she teaches her children, Journey River, 5, Bodhi Ransom, 8, and Noah Shannon, 9, about gender identity and encourages them to be confident in who they are.
FAMILY RELATIONSHIPS・20 DAYS AGO
ComicBook

After weeks of silence, Chris Rock has finally addressed his now-infamous incident with Will Smith at March's 94th Annual Academy Awards. During another sold-out show at Baltimore's Lyric Performing Arts Center on Friday, Rock directly referenced the slap, but only spent a second on it before moving on with his set.
BALTIMORE, MD・22 DAYS AGO
Insider

From the gourmet meals and missions to the VIP perks and room with a droid, here's what the galactic experience was like — and why we'd do it again.
21 DAYS AGO
inputmag.com

Elon Musk, the world’s wealthiest man, who thinks tunnels are immune to natural disasters, is purchasing Twitter. The company confirmed on Monday afternoon that it had accepted the billionaire’s offer. “Twitter, Inc. today announced that it has entered into a definitive agreement to be acquired by an entity wholly owned by Elon Musk, for $54.20 per share in cash in a transaction valued at approximately $44 billion,” reads the official press release. “Upon completion of the transaction, Twitter will become a privately held company.”
BUSINESS・21 DAYS AGO
Complex

Benzino is once again airing out some family business. After previously calling 50 Cent the “first hip-hop rat,” and getting into various other conflicts with his daughter Coi Leray, the rapper has now name-dropped both of them in a Twitter tirade. On Sunday, Fif took to Instagram to...
CELEBRITIES・21 DAYS AGO
musictimes.com

Andrew Woolfolk, popularly known for being Earth, Wind & Fire's longtime saxophonist, has passed away at the age of 71; what was his cause of death?. Fellow bandmate Philip Bailey took to Instagram to confirm the tragic news and recalled their early years, saying they met in High School and quickly became friends and bandmates.
BILOXI, MS・20 DAYS AGO

Click here to read the full article. John Woo’s “Silent Night” recently wrapped principal photography in Mexico City. The film is the first U.S. action movie directed by the iconic helmer Woo in more than a decade. In “Silent Night,” Godlock (played by Joel Kinnaman) is a father on a mission to avenge his young son who was tragically caught in the crossfire of gang violence on Christmas Eve. Shot and nearly killed while in pursuit of the murderers, Godlock vows to avenge his son by any means necessary. Kinnaman is pictured above in an exclusive first look still from the actioner. The film...
MOVIES・58 MINUTES AGO