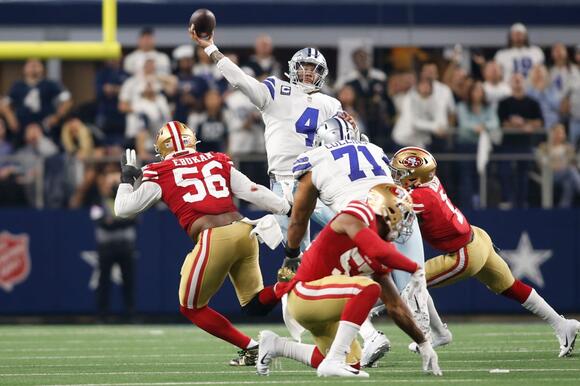 Round one of the 2022 NFL playoffs is in the books; tune in for a recap and more.

With Friday and Saturday of wild-card weekend in the books, Conor and Gary dive into what went down. Which included Dak Prescott, a second too late. Yes, a discussion of the buffoonish inefficiency of the Cowboys’ final play selection, as well as the performance of one team that wasn’t prepared and another that seemed uninterested in closing them out.

Then, the Bucs outclass the Eagles in a bitter end for Philly’s season, as Tom Brady continues to be often unstoppable and incredibly boring to watch. In the AFC, the Chiefs and Steelers square off in a game that never should have been played, but the football gods make up for it by sending Patrick Mahomes and Josh Allen to play head-to-head next weekend. Plus, a trip back to Saturday night and how the Bills put together a flawless game against the Patriots, and the absurd goodness of Joe Burrow and the future of the Carr-Bisaccia Raiders.

Have a comment, critique or question for a future mailbag? Email themmqb@gmail.com or tweet at @GGramling_SI or @ConorOrr .

Listen to The MMQB NFL podcast

The Lakers legend has only appeared on ESPN once this entire NBA season.
LOS ANGELES, CA・1 DAY AGO
Sports Illustrated

The former star running back took his wife’s last name and explained why.
NFL・1 DAY AGO
Sports Illustrated

So, About My Warriors-Mavs Prediction ...

If we turn back the clock precisely a week ago, there was a man who made a particularly bold claim: The red-hot Mavericks, fresh off embarrassing the top-seeded Suns, would also go on to knock off the Warriors to reach the NBA Finals. The column laid out valid enough reasoning, highlighting ...
SAN FRANCISCO, CA・2 DAYS AGO
Sports Illustrated

The Bucs quarterback caused quite a stir with his latest social media post.
NFL・1 DAY AGO
Sports Illustrated

The undrafted rookie made a one-handed grab at practice but that wasn’t the most impressive part for the quarterback.
KANSAS CITY, MO・21 HOURS AGO
Sports Illustrated

The tryout is a trial balloon for the rest of the NFL, which may finally lead to an opportunity to make a roster.
LAS VEGAS, NV・1 DAY AGO

The ESPN radio hosts are preparing for a two-on-two challenge.
DURHAM, NC・20 HOURS AGO
Sports Illustrated

The Bills quarterback isn’t buying that the seven-time Super Bowl champ holed out on camera.
NFL・1 DAY AGO
Sports Illustrated

Source: McDaniels, Ziegler Expected to Be at Kaepernick’s Workout

The quarterback is working out with the Raiders later Wednesday afternoon at the franchise’s facility.
LAS VEGAS, NV・1 DAY AGO
Sports Illustrated

“Super happy for Aaron [Rodgers]… The dude deserves it, obviously what he has done the last two years.”
GREEN BAY, WI・1 DAY AGO
Sports Illustrated

The Pelicans announced their star forward has been medically cleared to play.
NEW ORLEANS, LA・14 HOURS AGO
Sports Illustrated

The primetime doubleheader scheduled for Oct. 8 could go to the most dramatic rivalry in college football right now.
COLLEGE SPORTS・1 DAY AGO
Sports Illustrated

It's only OTAs, but the Jets’ QB looks set up to improve in his second season.
NFL・32 MINUTES AGO
Sports Illustrated

The wide receiver was present at OTAs while rehabbing his ankle.
NEW ORLEANS, LA・14 HOURS AGO