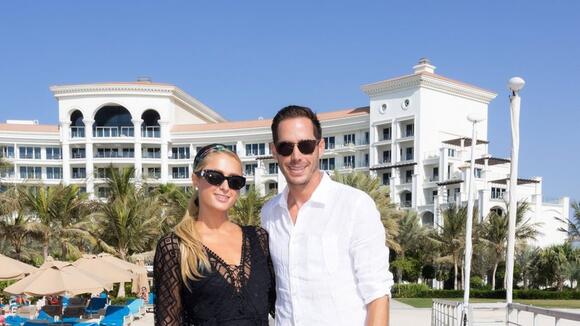 Paris Hilton is back from her extended honeymoon after marrying Carter Reum in November!

“Extra’s” Terri Seymour spoke with Paris, who is ready for fans to watch her wedding unfold on “Paris in Love.” Along with saying that married life is “amazing,” she gushed, “I love being a wife, and he is just the perfect husband.”

Their “perfect” honeymoon took Paris and Carter around the world for seven and a half weeks. She shared, “We had a lot of time just to relax and decompress.”

As for her favorite parts of the honeymoon, she dished, “In the Maldives, at the Conrad, they have the first underwater suite. And it was this huge villa and felt like you were, like, literally in an aquarium. It was just so magical. And then the Waldorf Astoria property in the Maldives was one of the most stunning properties I've ever been to in my life. So it was just so romantic.”

Her wedding and all the planning involved was documented on her Peacock series. She said, “I just had so much fun doing the show and just showing my fans my life, my love, and spending time with my mom. And I can't wait for everyone to see the wedding episode — it is just magical. That was just a fairy tale wedding.”

Paris kept it real about the stressful parts, too, saying, “So I think all brides are stressed out planning a wedding, but having to film a TV show on top of running an empire… it was a lot, but I'm happy that we did it because it's like the ultimate wedding video. You know, everyone always has like a wedding videographer at their wedding… I don't even know how many cameras, probably like 50 of them, so we captured everything.”

Paris is back to work with an new docu-style podcast called “Trapped in Treatment,” based on her experience at Provo Canyon School, set to debut next week. She noted, “My parents sent me to boarding school. Well, they thought it was a boarding school. They had no idea what was happening there. But Provo Canyon School and schools like this are extremely abusive… When I found out that this was still going on, I knew I needed to do something about it… I'm just so proud of all the work we've been doing… We've changed laws in seven states... And now we are taking it to a federal level… I have done a lot of things in my life that I'm proud of, but this by far is the thing I'm most proud of.”

Paris is also proud of her friend Britney Spears, who is now free from her conservatorship. Britney is currently in a feud with her sister Jamie Lynn Spears over her book “Things I Should Have Said.” Paris said, “I haven't spoken to her in a couple of weeks. But you know, that's a hard thing when it's your family. I think… you always want your family to be there and support you, so I'm sure it's very difficult for them to be dealing with this right now in the public eye.”

Britney Spears announced over the weekend that she had suffered a miscarriage, and now boyfriend Sam Asghari is speaking out about the pregnancy loss. Sam took to Instagram Stories to write, “We have felt your support. We are taking things positively and moving forward with our future.”. He continued,...
CELEBRITIES・9 DAYS AGO
Insider

On Thursday, news broke that Rihanna and A$AP Rocky welcomed a baby boy last week. Now, her ex-boyfriend Chris Brown is seemingly reacting to the news. Along with posting a prayer emoji and a pregnant woman emoji, he wrote on Instagram, “Congratulations.”. Brown did not tag Rihanna or name...
CELEBRITIES・7 DAYS AGO
extratv

Cybill Shepherd was on hand Friday at the annual Race to Erase MS benefit gala in Los Angeles, where she chatted with “Extra” about the cause. She also opened up about her memories of working with "Moonlighting" co-star Bruce Willis in the wake of the announcement he has retired to battle aphasia.
LOS ANGELES, CA・4 DAYS AGO

Jenna Bush Hager is departing on an adventure unlike any other! The star revealed on the Today Show that she would be "setting sail," quite literally, in honor of the return of New York's iconic Fleet Week. ALSO: HELLO! launches Jubilee T-shirt collection to celebrate Queen Elizabeth in style. Fleet...
NEW YORK CITY, NY・2 DAYS AGO
extratv

Cohen just welcomed baby girl Lucy and is launching a new iteration of “The Real Housewives of New York.”. “Extra” spoke with Cohen, who gave an update on his daughter. He said, “She is so good… Looks just like her brother and she’s, so far, adorable.”
NEW YORK CITY, NY・10 DAYS AGO
Us Weekly

Courtesy of Coco Austin/Instagram A divisive decision? After Coco Austin offered a glimpse at her day out with her family — social media users were quick to question the outing. "A stroll through the @atlantisbahamas shops... Chanel is so over it unless theres something cool to see .. Her face transitions instantly," Austin, 43, captioned […]
CELEBRITIES・2 DAYS AGO

On Friday, Sheen took to Twitter to announce the arrival of his third child, his second with actress girlfriend Anna Lundberg, 26. Along with posting a photo of their bundle of joy holding his pinky finger, he tweeted, “And just like that… there was another monkey jumping on the bed.”
CELEBRITIES・6 DAYS AGO
extratv

Wells Adams on When He Hopes to Marry Sarah Hyland

“Bachelor Nation” favorite Wells Adams will once again return as the show’s resident bartender and contestant confidante when “Bachelor in Paradise” returns with host Jesse Palmer. “Extra’s” Tommy DiDario spoke with Adams about his wedding plans with fiancée Sarah Hyland, who was there to support....
RELATIONSHIP ADVICE・8 DAYS AGO
extratv

Erika Jayne Sounds-Off on ‘RHOBH’ Drama and Her Dating Life

Erika Jayne is getting candid about the drama on “The Real Housewives of Beverly Hills” Season 12, and she’s also opening up about her dating life. “Extra’s” Rachel Lindsay caught up with the reality star, who shared, “I’m okay. Life goes on. I am picking up the pieces and moving forward as best as possible.”
CELEBRITIES・8 DAYS AGO
extratv

Grab the tissues, because this is the end for “This Is Us”!. “Extra’s” Rachel Lindsay spoke with Mandy Moore ahead of the series finale, which centers on the aftermath of her character Rebecca’s passing. When Rachel offered Mandy some tissues at a FYC event, which...
CELEBRITIES・2 DAYS AGO

Scary! Jason Aldean’s son Memphis, 4, landed in an emergency room on Tuesday, but thankfully he’s doing better. Jason, 45, shared the news on Instagram Stories with a photo of Memphis in the hospital, revealing, “Lil man had his first trip to the ER today. Needed 2 stitches and took it like a champ. Back home and rockin.”
MUSIC・8 DAYS AGO
extratv

Idris Elba & Wife Sabrina on How Their Relationship Has Evolved

British superstar Idris Elba and his wife Sabrina have taken on the podcast world with “Coupledom”!. “Extra’s” Carlos Greer interviewed the duo to get the scoop on the show, which is about the power of partnerships and all relationships. Idris explained, “Our partnership with the earth...
CELEBRITIES・7 DAYS AGO
extratv

“Schitt’s Creek” alum Sarah Levy, 35, has a bun in the oven!. Levy is expecting her first child with husband Graham Outerbridge. On Monday, Levy announced her pregnancy by debuting her baby bump on Instagram. Along with a photo, she wrote on Instagram, “We’ll take all the salt...
CELEBRITIES・10 DAYS AGO
extratv

“Extra’s” Katie Krause spoke with Stephen “tWitch” Boss about bidding farewell to “The Ellen DeGeneres Show.”. “Man, that final week is gonna be lots of ugly crying,” tWitch said. He noted that the emotions have come “In spurts here and there,” especially when video...
TV & VIDEOS・7 DAYS AGO
extratv

Selena Gomez, Steve Martin and Martin Short are back for Season 2 of “Only Murders in the Building,” and they teased what to expect in a new interview with “Extra’s” Tommy DiDario at ABC Upfronts!. Selena played coy about the buzz that Cara Delevingne is...
CELEBRITIES・9 DAYS AGO
extratv

After nearly a year of dating, Jason Sudeikis and Keeley Hazell have reportedly called it quits. The Sun U.K. reports that they split due to their busy schedules. While Us Weekly confirms the split, sources told Page Six that they are still “hooking up.”. Six months ago, Jason and...
CELEBRITIES・8 DAYS AGO
extratv

“Extra” spoke with Nick Jonas and Shakira at the NBC Upfront presentation about their new show “Dancing with Myself.”. Jonas also gushed about Camila Cabello joining “The Voice,” saying, “Camila is going to kill it.”. “I think it’ll be a lot of fun for her,”...
CELEBRITIES・10 DAYS AGO
extratv

Meghan Markle’s dad Thomas, 77, was admitted to a hospital Monday night. TMZ reports Thomas was rushed into a facility in Chula Vista, California, after showing stroke-like symptoms. When he was loaded onto the ambulance in Tijuana, he was unable to speak and needed a pen and paper to...
CHULA VISTA, CA・2 DAYS AGO