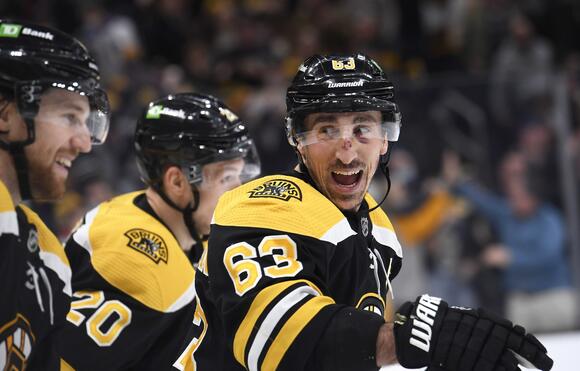 We don't hear about quite as much trash talk from Brad Marchand these days as we did during his younger years, but rest assured, those zingers are still there if he feels the situation warrants it.

Tuesday afternoon was one of those situations. Here's the setup:

With the Bruins set to host the Hurricanes Tuesday night, Carolina forward Vincent Trocheck was asked by Chip Alexander of the Raleigh News & Observer if he sees similarities between his game and Marchand's.

Before saying he does see some similarities, Trocheck jokingly asked, "Are you calling me a rat?"

Pretty good response! Marchand, of course, has been referred to as a "rat" many times throughout his career.

Marchand clearly got wind of this a short time later, and decided to respond on Instagram with an even better one-liner: "This is like comparing a Lambo to a Prius."

In addition to his response and an image of Trocheck's quote, Marchand also shared screenshots of each player's career stats page on hockeydb.com, plus another screenshot showing that Marchand is fourth in the NHL in points over the last five seasons, behind only Connor McDavid, Leon Draisaitl and Nathan MacKinnon.

Marchand deleted the Instagram post about a half hour after posting, but we can verify that it was on his official account. It's unclear why he deleted it, as it all seemed to be in pretty good fun.

Here are screengrabs of what Marchand posted:

With their season over after Saturday’s Game 7 loss to the Carolina Hurricanes, the Boston Bruins now face an offseason filled with potentially franchise-altering questions. At the top of the list: What does Patrice Bergeron decide to do?
BOSTON, MA・1 DAY AGO
WEEI Sports Radio

Giannis had a crazy travel last night that wasn’t called

Giannis Antetokounmpo is apparently allowed to take as many steps as he pleases. The Milwaukee Bucks star wasn’t called for a blatant travel against the Boston Celtics in the NBA playoffs.
BOSTON, MA・2 DAYS AGO
WEEI Sports Radio

After falling behind in the first quarter, the Boston Celtics took care of the Milwaukee Bucks on Sunday, punching their ticket to the Eastern Conference Finals.
BOSTON, MA・21 HOURS AGO

Scott Foster a late scratch for Game 6 of Celtics-Bucks

Scott Foster was originally scheduled to referee Game 6 of Celtics-Bucks, but Boston won’t get the extra boost from the official known for extending series.
BOSTON, MA・2 DAYS AGO
WEEI Sports Radio

Big test over for Celtics, time to make quick work of Heat

Payton Pritchard shouting ’that’s what I do!’ after nailing a game-clinching 3 was iconic

Boston Celtics guard Payton Pritchard couldn’t contain his excitement after hitting a game-clinching 3 Sunday against the Milwaukee Bucks. He taunted the Bucks’ bench, and it was iconic.
BOSTON, MA・5 HOURS AGO