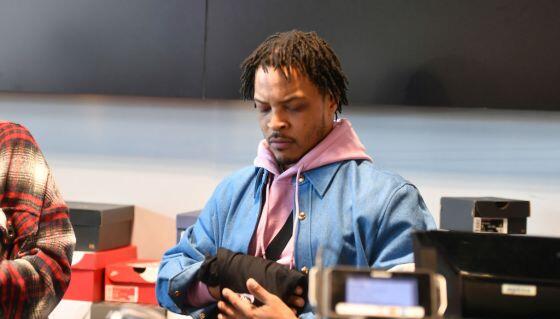 T.I. claims, “nobody f***ing with [him]” on the mic, throwing Kanye West, Jay-Z, Lil Wayne, and more names under the bus. 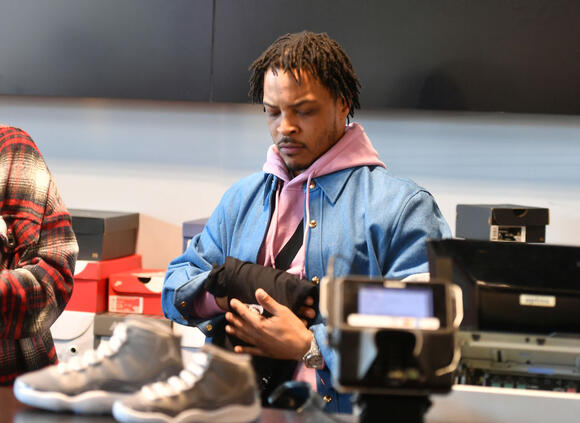 T.I. seems to always have whatever he says taken right out of context, having people ready to argue about it no matter what the topic is. His latest storm is coming over his comments about his rapping ability and how he declared that “nobody f***ing with me on the mic”.

To be fair, there is nothing wrong with T.I. feeling himself and his ability–but the internet felt differently and wasted no time reminded him of all the times he had been washed on a track. Check out out some of the songs in question below and let us know on Twitter if you agree!

He is no scrub; he does alot of things for his community and is a businessman, and it's okay to give yourself credit where credit is due, but...........lets be realistic now.🤐

T.I. I need you to EXPEDITIOUSLY retrack that statement. I salute you for all of your achievements, accolades etc..but come on naahhh.🤦🏾‍♀️

He's always been delusional about his star power. But, he might want to not compare himself to the two billionaires.

Too $hort has worked with a score of legendary producers throughout his almost 40-year career, from Jermaine Dupri and Lil Jon to Daz Dillinger and DJ Pooh. But one big-name beatsmith he passed up the opportunity to work with was Kanye West. During a recent interview with VladTV, the Bay...
CELEBRITIES・23 DAYS AGO
Bossip

Wait, What?! Lil Wayne Responds To Mark Cuban’s Troll Tweet, Threatens To Smack Him & Urinate In His Mouth

Lil Wayne fires back at Mark Cuban's tweet trolling him after his disrespectful comments about his star player Luka Dončić. The post Wait, What?! Lil Wayne Responds To Mark Cuban’s Troll Tweet, Threatens To Smack Him & Urinate In His Mouth appeared first on Bossip.
CELEBRITIES・1 DAY AGO
Bossip

The day is finally here! It’s Kendrick Eve and after five years away from the rap game, his return is hours away. We still have very few details about Mr. Morale & The Big Steppers, but below is what we do know. On “Family Ties,” Kendrick promised he would...
MUSIC・7 DAYS AGO
Hello Magazine

Robin Roberts got emotional as she opened up about her relationship with partner Amber Laign, especially in the midst of a challenging health battle. The Good Morning America star made an appearance on The Ellen DeGeneres Show to promote her new book, Brighter By the Day. VIDEO: Robin Roberts enjoys...
CELEBRITIES・23 DAYS AGO

Laughter erupted in courtroom after Johnny Depp said he doesn’t watch his own movies and couldn’t recall the question he was asked. “I don’t watch them. I feel better not watching them. What was the question again?” Mr Depp said to laughter from the room. Johnny Depp trial – latest updates“Order in the court, or I will have you removed,” Judge Azcarate said. “Understood? Thank you.”The defamation trial between Mr Depp and Amber Heard began on Monday 11 April in Fairfax, Virginia following Mr Depp’s lawsuit against his ex-wife in March 2019. Mr Depp is arguing that she defamed him...
CELEBRITIES・23 DAYS AGO
Bossip

Adele and Rich Paul might have kept their relationship private in the beginning, but now, they wanna share their love with the world.
CELEBRITIES・7 DAYS AGO
PopCrush

Last month it was revealed that Sharon Osbourne would be returning to television, partnered with Piers Morgan on a new U.K. series named The Talk. This comes nearly a year after Osbourne was suspended and eventually exited the U.S. talk show The Talk after expressing her support for Morgan in an intense discussion over race with co-host Sheryl Underwood. Now, in a new interview with the U.K.'s Sunday Times, Osbourne reveals how cancel culture impacted her as she eventually parted ways with her longtime daytime talk series amidst public backlash.
CELEBRITIES・24 DAYS AGO
hotnewhiphop.com

Flo Milli is setting some boundaries. The Alabama native is known for hits like "In The Party," "May I," and "Not Friendly," and while she loves to see fans in the audience having a good time and turning up at her shows, she's not impressed with watching them snort lines from up on stage.
CELEBRITIES・24 DAYS AGO

50 Cent cast doubt on Megan Thee Stallion's recent comments about not having been in an “intimate relationship” with Tory Lanez, prior to the infamous shooting in July 2020 which left her with gunshot wounds. Megan's comment came during a recent interview with Gayle King, during which she...
CELEBRITIES・22 DAYS AGO
Outsider.com

After weeks of silence, Chris Rock has finally addressed his now-infamous incident with Will Smith at March's 94th Annual Academy Awards. During another sold-out show at Baltimore's Lyric Performing Arts Center on Friday, Rock directly referenced the slap, but only spent a second on it before moving on with his set.
BALTIMORE, MD・24 DAYS AGO
Us Weekly

Mark Hamill has revealed he lost thousands of followers on Twitter in the space of a few hours yesterday (25 April).While the exact reason for the exodus has not been confirmed, his tweet came shortly after it was announced that Elon Musk is set to purchase the social media platform in a deal worth $44bn.Since the news broke, many users of the site (including Jameela Jamil) have announced their intention to delete their accounts, owing to Musk’s reputation as a politically controversial figure. It is believed this could be the reason for Hamill’s loss in followers.“Weird. I just lost...
CELEBRITIES・23 DAYS AGO
hotnewhiphop.com

Kim Kardashian's ex-husband, Damon Thomas, continues to "wish her the best," despite any false narratives about their past relationship. The 51-year-old sat down with DJ Vlad, looking back at his marriage with now-billionaire businesswoman Kim Kardashian in the early 2000s. He believes he's played a "part in their journey," however, he doesn't want to be known as "Kim Kardashian's husband" and wants to "get in control of [his] narrative," as many people fail to recognize he has won Grammys and even made it to the Oscars.
RELATIONSHIPS・22 DAYS AGO
Bossip

Following the release of this interview, the mother of DaBaby's other child, Meme, wasted no time in responding to DaniLeigh's claims
FAMILY RELATIONSHIPS・8 DAYS AGO
hotnewhiphop.com

It seems Coi Leray is getting fed up with the drama. She and her father, Benzino, have not seen eye to eye for quite some time, and despite numerous attempts to mend their relationship, they keep ending up back at square one. Yesterday, 50 Cent, whose been feuding with Benzino...
CELEBRITIES・24 DAYS AGO
Daily Mail

Katy Perry reacted quite hilariously to a Top 11 contestant on American Idol during a unique song challenge on Monday night's episode. Each of the remaining contestants were given a song to perform by each judge - Perry, Lionel Richie and Luke Bryan - with the singer selecting one and then tasked with guessing which judge picked that song for him or her.
MUSIC・23 DAYS AGO
Insider

"The sisters are clearly concerned for our brother's safety and the credibility of the brand," Khloe Kardashian wrote in a 2016 email.
LOS ANGELES, CA・23 DAYS AGO
PopCrush

90 Day Fiancé: Before the 90 Days star Johnny Chao is showing off a new look on social media. The reality TV star rocked a fresh-faced look on the show. However, Chao debuted some new facial hair in his most recent post on Instagram. More specifically, he grew a beard and mustache.
TV & VIDEOS・22 DAYS AGO
Bossip

After Decision Day, a “Married At First Sight” groom is opening up about the viral cooking and cleaning demands he had for his wife, and BOSSIP’s got an exclusive first look. As previously reported Olajuwon and Katina both said “yes” to remaining married on #MAFS Decision Day,...
TV & VIDEOS・21 HOURS AGO