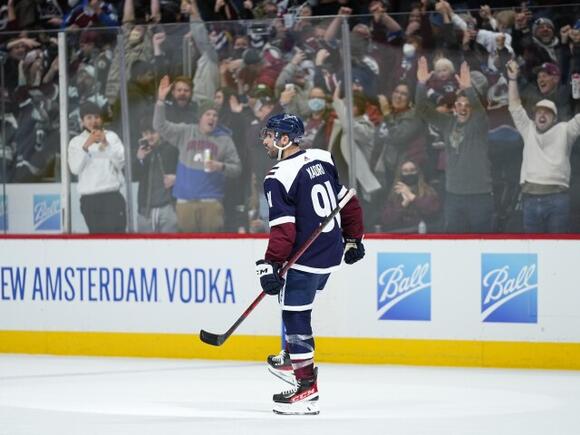 DENVER – Avs forward Nazem Kadri is headed to the NHL All-Star Game after all after getting voted in by fans through the “Last Men In” vote.

Kadri, who is fifth overall in the NHL in points and is second overall in assists, received the most votes in the competition , according to the NHL, and received more than twice as many votes as any other player in the Central Division.

It will be the 31-year-old Kadri’s first All-Star Game after 13 seasons in the league. Kadri leads the Avalanche in points (49) and assists (35) and is third on the team with 14 goals.

He will join Nathan MacKinnon, Cale Makar and coach Jared Bednar at the All-Star Game on the Central Division squad.

“It’s a career year,” Bednar said of Kadri’s first half. “It’s a remarkable year, to this point. So, you look at his numbers, you look [at] what he’s doing for our team, helping us get to where we are in the standings, and I believe he deserves to be in.”

As of Tuesday, the Avalanche led the Central Division with 53 points and a +41 goal differential. They also lead the Western Conference by two points over St. Louis and Nashville.

Former University of Denver star Troy Terry, now a forward for the Anaheim Ducks, was also picked in the “Last Men In” vote and will make his first All-Star Game appearance. He is sixth in the league with 22 goals.

MacKinnon will captain the Central Division team in a three-game tournament of 3-on-3 matches, with the teams broken down by divisions.

The All-Star Game will start at 1 p.m. MT on Feb. 5 in Las Vegas and will be broadcast on Denver7.

Tommy La Stella homered on the second pitch of the game and doubled twice as the San Francisco Giants extended their dominance against Colorado with a 10-7 win over the Rockies.
DENVER, CO・2 DAYS AGO