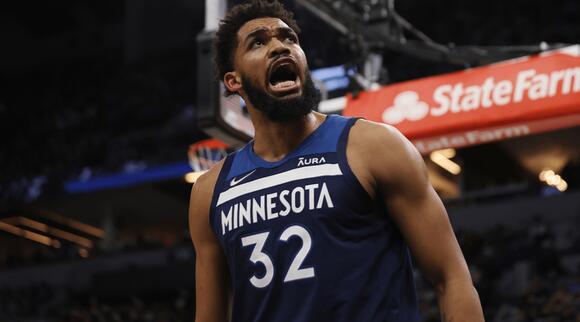 Analysis and bets for Tuesday's games featuring the Timberwolves visiting the Knicks and the Warriors welcoming the Pistons.

The Timberwolves beat the Steph Curry-less Warriors by 20 points Sunday to creep within one game of .500 ahead of their Tuesday matchup with the Knicks.

New York, meanwhile, has been playing good basketball since its epic 108-105 win over the Celtics on Jan. 6 thanks to RJ Barrett’s emergence.

Half of the Pistons’ wins this season have come since the calendar flipped to January—Detroit has been playing much-improved basketball over the past few weeks.

The Warriors have been floundering this month but they get Curry back against the Pistons, whom they beat earlier this season.

Minnesota is on the verge of being .500 for the first time in three weeks. Its stretch of above-.500 basketball in January has come at the expense of bad or injured teams. That stretch continued Sunday when they waxed the Warriors, 119-99, without Curry. The Knicks won the first matchup, 96-88, in December but the Timberwolves were without Karl-Anthony Towns, D’Angelo Russell and Anthony Edwards.

New York lost Monday against the Hornets, who were without LaMelo Ball, but had won three in a row before that and five of their last six. The Knicks have regained their defensive prowess from a season ago, moving into the top 10 in points allowed after holding seven of their last 10 opponents under 100 points.

Short-handed doesn’t even begin to describe Minnesota in its last matchup with the Knicks on Dec. 28. Playing at home hasn’t been the advantage it should be for New York, which is 11-12 at Madison Square Garden. The Knicks have been playing better basketball as of late, but I still like the Timberwolves to cover with their Big 3 available.

Minnesota’s recent offensive numbers have been inflated by running up the score against the Thunder and Rockets. New York won’t allow it to get into the 120s like the Timberwolves have as of late since they have rarely allowed opponents triple-digits in recent weeks. Minnesota doesn’t excel on defense and usually wins by outscoring opponents in shootouts, rather than grit and grind matchups, but the Knicks aren’t necessarily capable of capitalizing on bad defense. This will be a low-scoring game.

Minnesota’s big man averages 9.3 boards per game and has gone over 8.5 rebounds in four of his last six games. New York is a slightly better than average rebounding team, though Miles Bridges grabbed 12 rebounds in the Hornets' win Monday. If this game is as low-scoring as I think it will be, there should be plenty of rebounds to go around for KAT and Jarred Vanderbilt, who’s been a monster on the glass for Minnesota.

In a matchup that features two mediocre teams, I like the hotter team here in the Wolves, especially with the Knicks on the second game of a back-to-back. The Knicks lost to a short-handed Hornets team Monday in a game they probably should have won (LaMelo Ball didn’t play). When betting a game with two somewhat unpredictable teams, I “trust the process” and go with the trends. When the Knicks are a 1.5-point or more underdog, they are 7-10 ATS. The Timberwolves are 13-8 ATS on the road. I think the Wolves are the slightly better team here and I am going to lay the 3.5.

While neither team is especially good, they both excel at the defensive end of the floor. The Timberwolves are strong defensively in the paint, holding opponents to 44 PPG inside. The Knicks are one of the worst teams in the league in two-point accuracy and assists per game, which favors Minnesota and slower pace for both teams. Both teams have been pretty active lately with the Wolves playing their second game in three days and the Knicks playing a back to back.

After a career year last season, Julius Randle has taken a big step back. RJ Barrett has cemented his role as the Knicks' best player and Randle's scoring has been very inconsistent as Barrett has taken the spotlight. Randle is shooting 22.9% from three and 41.3% from the field, a big drop from last year. He has only gone over 20.5 points in three out of his last seven games and is facing a pretty good defensive team.

The duality of Detroit is beating Milwaukee, Utah and Toronto in the span of a few weeks and losing to Chicago by 46 points. Blowouts aside—and the Pistons were also blown out by the Suns in their last game—Detroit is playing significantly better in the last few weeks. Cade Cunningham has been a more than capable distributor, while a different Pistons player leads the team in scoring seemingly every night.

Trouble in paradise? Golden State had a rocky start to the New Year. Right when Klay Thompson returned, Draymond Green went out and Curry just missed a game—another Warriors loss. Golden State manhandled the Bulls by 42 on Friday, but its recent stretch has allowed the Suns to create some distance for the West's top seed.

Detroit is prone to big losses, no matter where they’re playing. But with so many large and favorable point spreads, the Pistons have stitched together a respectable ATS record amid their recent success. Beating down Detroit wouldn’t be the same statement win that laying waste to Chicago was for the Warriors. I think Golden State wins by a sizable margin, but maybe doesn’t keep their foot on the gas and the Pistons hang around to cover.

The Pistons yield a lot of points, but the Warriors haven’t put up any monster offensive performances in weeks—the Bulls game aside. Golden State can likely hold Detroit’s bottom-tier offense from cracking 100 points. This is an easy under.

The rookie has found his game. Cunningham had 21 points in 25 minutes against the Suns before being ejected. He’s gone over 16.5 points in three of his last five games and is averaging 16.9 PPG in January. With Payton and Green out—I like Cunningham to go over.

The Pistons are one of—if not the—worst teams in the league, while the Warriors are a championship contender. Golden State has been scuffling lately, losing to the Timberwolves on Sunday playing without Curry and Green, the latter of whom will be sitting this one out. Curry will be back and it should be a blowout. The Pistons are 3-18 overall and 9-12 ATS on the road. Not really much more to say. Lay the points.

The Pistons are one of the worst offensive teams in the league and the Warriors are arguably the best defensive team. Curry and the Warriors have struggled on the offensive end as of late. With the total set at 218.5 and the Pistons being atrocious on the road, I am leaning toward the under. I just don’t see Detroit being competitive and I think that once the Warriors build a lead they will slow the pace significantly.

In one of the most anticipated returns in recent memory, Thompson is still getting his legs under him. While being limited to 20 minutes in his first few games, he played 23 in his last outing in a loss against the Timberwolves. This game is a perfect opportunity for a “get right” game for Thompson, while playing in front of his home crowd with Curry being limited a little bit while still battling a hand injury.

Get fantasy and betting analysis in your inbox by signing up for the Winners Club newsletter .

The Lakers’ star doesn’t even hold back when playing against his son.
LOS ANGELES, CA・2 DAYS AGO
Sports Illustrated

The Golden State star hit big shot after big shot down the stretch as the Warriors jumped out to a 2–0 series lead over Dallas.
DALLAS, TX・1 DAY AGO
Sports Illustrated

The Grammy Award-winning rapper will play professionally for the second consecutive season.
NBA・2 DAYS AGO

Bet on this four-leg, same-game parlay at SI Sportsbook for Game 2 of the Western Conference finals between the Mavericks and Warriors.
DALLAS, TX・1 DAY AGO
Sports Illustrated

The guard will only play for the Jayhwaks in his senior season if he withdraws from the 2022 NBA draft.
KANSAS STATE・2 DAYS AGO
Sports Illustrated

A number of players who declared for the NBA draft also entered their names in the portal should they return to school.
COLLEGE SPORTS・2 DAYS AGO

The Warriors forward draws a lot of similarities between the 23-year-old and LeBron James.
NBA・1 DAY AGO
Sports Illustrated

The Lakers’ star took to Twitter to voice his opinion on a league-wide issue.
NBA・1 DAY AGO
Sports Illustrated

The six-time All-Star was ruled for the rest of Saturday’s contest against the Celtics after logging 20 minutes in the first half.
MIAMI, FL・7 HOURS AGO

The 93-year-old NBA legend said the league must’ve had the ‘best firemen and plumbers’ at that time.
BOSTON, MA・1 DAY AGO
Sports Illustrated

Celtics Flex Their Defense vs. Heat in Game 2

With Marcus Smart and Al Horford back in the fold, Boston showcased what makes its defense special.
BOSTON, MA・1 DAY AGO
Sports Illustrated

Bet on this four-leg, same-game parlay at SI Sportsbook for Game 2 of the Eastern Conference finals between the Heat and Celtics.
MIAMI, FL・2 DAYS AGO
Sports Illustrated

The NBA legend made sure to crack a couple jokes at the expense of the Warriors forward as he prepared for Game 2 against the Mavericks.
NBA・1 DAY AGO
Sports Illustrated

As both franchises enter a period of transition this summer, team executives have reportedly met at the NBA Combine.
LOS ANGELES, CA・16 HOURS AGO