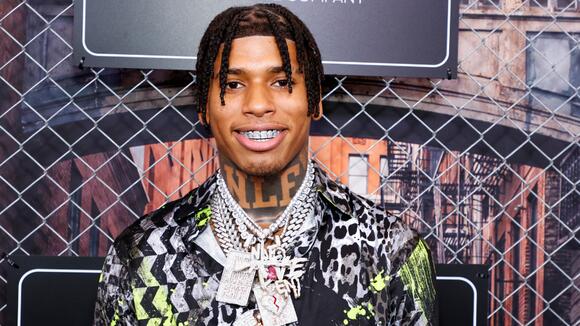 NLE Choppa is speaking out about the recent altercation he had with an alleged NBA Youngboy fan at a LAX on Monday. In the viral footage of the incident, the 19-year old Top Shotta rapper was making his way through the airport when the Youngboy fan approached him while filming him, asking:

"Are you NLE? I asked you mad times. What? Stop playing with me.”

The scuffled ensued shortly after, as NLE punched the unidentified fan, who shared the footage, claiming

After the video made its rounds on social media, NLE addressed the incident in a slew of tweets --- which he since deleted --- sharing:

“I be at peace minding my business but the devil work overtime to bring negativity to someone who seeks positivity. Begging y’all to leave me alone, I’m not one of them no matter how much I’ve changed. I’ll put anybody under I got a daughter, a son on the way, and family to feed.”

"It’s a difference from getting hit and falling then fighting in flip flops and falling on yo own. I fell throwing a punch Ian get hit til I was otw down [crying laughing emojis] and my backpack 20 pounds. Buddy lip swole everything I through connected. My whole ankle rolled I got ice onnat how rn.”

NLE wasted no time getting back to the positive vibes shortly after speaking out about the incident, sharing a photo of himself on the basketball court, asking Chris Brown for a rematch.

NBA Youngboy has yet to comment on the incident.

After weeks of silence, Chris Rock has finally addressed his now-infamous incident with Will Smith at March's 94th Annual Academy Awards. During another sold-out show at Baltimore's Lyric Performing Arts Center on Friday, Rock directly referenced the slap, but only spent a second on it before moving on with his set.
BALTIMORE, MD・24 DAYS AGO
hotnewhiphop.com

50 Cent cast doubt on Megan Thee Stallion's recent comments about not having been in an “intimate relationship” with Tory Lanez, prior to the infamous shooting in July 2020 which left her with gunshot wounds. Megan's comment came during a recent interview with Gayle King, during which she...
CELEBRITIES・22 DAYS AGO
Us Weekly

It seems Coi Leray is getting fed up with the drama. She and her father, Benzino, have not seen eye to eye for quite some time, and despite numerous attempts to mend their relationship, they keep ending up back at square one. Yesterday, 50 Cent, whose been feuding with Benzino...
CELEBRITIES・24 DAYS AGO
Complex

Benzino is once again airing out some family business. After previously calling 50 Cent the “first hip-hop rat,” and getting into various other conflicts with his daughter Coi Leray, the rapper has now name-dropped both of them in a Twitter tirade. On Sunday, Fif took to Instagram to...
CELEBRITIES・23 DAYS AGO
Outsider.com

She’s definitely embracing the Hawaii lifestyle, and now “NCIS: Hawai’i” star Vanessa Lachey is showing off her everyday surrounding to her Instagram followers. “Hawai’i = Home,” Vanessa Lachey declares in her latest social media post. The “NCIS: Hawai’i” star also shares a snapshot of her sitting in a breathtaking area in Hawaii.
HAWAII STATE・22 DAYS AGO
bravotv.com

Porsha Williams and her fiancé, Simon Guobadia, have been busier than ever planning their upcoming nuptials, as The Real Housewives of Atlanta: Porsha's Family Matters couple previously opened up about "going big" on their special day. Now, Porsha is giving a glimpse at her bridal party ahead of her...
ATLANTA, GA・22 DAYS AGO