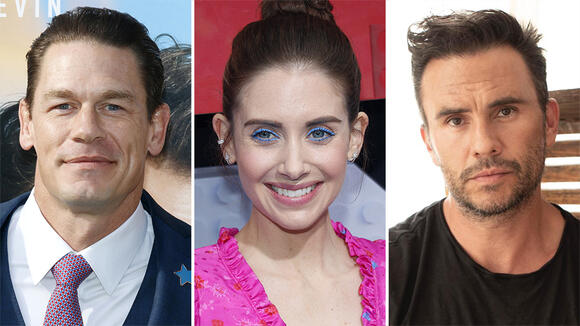 Filming is now underway in Colombia on the movie, which follows a special forces operator (Cena) who decides to retire from the Army and start a family back in the U.S. After several years of mortgage payments, school drop-offs, backyard barbecues and trying to conform to life in suburbia, he decides to come out of retirement to take a gig providing security for a female journalist (Brie) as she interviews a cruel dictator who may or may not have ordered the attack on him and his men. When a military coup breaks out in the middle of the interview, the three are forced to escape into the jungle where they must survive the elements, the military and one another.

Colombian actor Raba recently appeared in the action-thriller The Marksman alongside Liam Neeson. TV roles include Ricky Ortiz in History’s military drama Six and Gustavo in hit Netflix series Narcos . He can currently be seen in Netflix’s original Colombian series Distrito Salvaje , in which he stars and executive produces.

“So pleased to have such a great cast coming together on Freelance and to be working with such accomplished actors,” said Richards. “With Pierre Morel at the helm, John, Alison and Juan Pablo make a perfect trio for this fun adventure!”

Raba is repped by Gersh and Impression Entertainment.

Click here to read the full article. EXCLUSIVE: The starry indie film packages keep on coming in Cannes with news we can reveal that Oscar winner Jamie Foxx (Spider-Man: No Way Home), Oscar winner Robert De Niro (Joker), Scott Eastwood (The Fate of the Furious) and John Leguizamo (John Wick) are set for under-the-radar action movie Tin Soldier, which begins filming next week in Greece. Tin Soldier tells the story of The Bokushi (Foxx), who preaches to hundreds of veterans who have been drawn to the promise of protection and purpose under him. Surrounded by his devout military-trained followers, he has...
NFL・2 DAYS AGO
Deadline

Click here to read the full article. EXCLUSIVE: Neve Campbell (The Lincoln Lawyer) has joined the cast of Peacock‘s Twisted Metal in a recurring role. Campbell will play Raven opposite Anthony Mackie, Stephanie Beatriz, and Thomas Haden Church. From Cobra Kai writer Michael Jonathan Smith and based on an original take by Rhett Reese and Paul Wernick, Twisted Metal is a half-hour action-comedy about a motor-mouthed outsider (Mackie) offered a chance at a better life — but only if he can successfully deliver a mysterious package across a postapocalyptic wasteland. With the help of a trigger-happy car thief (Beatriz), he’ll face savage...
NFL・17 HOURS AGO
Deadline

Click here to read the full article. Sarah Wayne Callies, James Saito, Tim Chiou, Freda Foh Shen and Felisha Terrell are set as leads in ABC drama pilot The Company You Keep, starring Milo Ventimiglia and Catherine Haena Kim, from 20th Television. The project, which is based on Korean format My Fellow Citizens that ran for more than 30 episodes on KBS2, follows con man Charlie (Ventimiglia) and undercover CIA officer Emma (Kim). A night of passion leads to love between the pair, who unknowingly are on a collision course professionally. While Charlie ramps up the “family business” so he...
NFL・17 HOURS AGO
Deadline

Click here to read the full article. EXCLUSIVE: Bong Joon Ho’s follow-up film to his Oscar-winning Parasite is gaining quite the ensemble, as sources tell Deadline that Toni Collette and Mark Ruffalo (whose deals are in final negotiations), along with Naomi Ackie, are joining Robert Pattinson in Bong’s next feature at Warner Bros. The untitled film is based on the novel Mickey7 by Edward Ashton. Bong will write, direct and produce for his production company Offscreen, alongside Kate Street Picture Company’s Dooho Choi and Plan B’s Dede Gardner and Jeremy Kleiner, as part of the latter’s overall deal with Warner Bros....
NFL・14 HOURS AGO

Click here to read the full article. Algerian actor Ahmed Benaissa died today following a lengthy illness and just hours before his film Sons of Ramses is scheduled for a Critics’ Week screening at the Cannes Film Festival. He was 78. His death was announced by the Algerian Ministry of Culture. MK2 Films, which is handling international sales for Sons of Ramses, said in a statement that tonight’s Cannes screening of the film will be dedicated to Benaissa. Hollywood & Media Deaths In 2022: Photo Gallery The film’s director, Clement Cogitore, said in a statement, “I am deeply saddened at the sudden passing...
NFL・16 HOURS AGO
Hello Magazine

Robin Roberts got emotional as she opened up about her relationship with partner Amber Laign, especially in the midst of a challenging health battle. The Good Morning America star made an appearance on The Ellen DeGeneres Show to promote her new book, Brighter By the Day. VIDEO: Robin Roberts enjoys...
CELEBRITIES・25 DAYS AGO
Deadline

Click here to read the full article. UPDATED: Celebrity TV Doctor Mehmet Oz will have to wait a few more weeks until he finds out whether he won or lost his bid to become the Republican nominee in the race for Pennsylvania’s empty Senate seat. While there is no official word, the Associated Press — long the gold standard in American election results — reported today that the contest between Oz and hedge fund CEO David McCormick “is too close to call and is likely headed for a statewide recount.” The AP reports the results may not be available until June 8,...
PENNSYLVANIA STATE・12 HOURS AGO
PopCrush

Last month it was revealed that Sharon Osbourne would be returning to television, partnered with Piers Morgan on a new U.K. series named The Talk. This comes nearly a year after Osbourne was suspended and eventually exited the U.S. talk show The Talk after expressing her support for Morgan in an intense discussion over race with co-host Sheryl Underwood. Now, in a new interview with the U.K.'s Sunday Times, Osbourne reveals how cancel culture impacted her as she eventually parted ways with her longtime daytime talk series amidst public backlash.
CELEBRITIES・25 DAYS AGO

Netflix has canceled another one of its major shows, with this one getting the ax after only two seasons. Variety reports that hit sci-fi drama Raising Dion has been dropped by the streamer, following its recent season debut. The news seems to have been revealed by series star Sammi Haney, who shared the news with fans on Instagram. "Sad to say that Raising Dion is CANCELED [sic] Thank you for all of the amazing support we got from all of our wonderful fans!" Haney wrote, in part. "Season 2 was a success, equal to Season 1, even if just looking at how many people watched all of it and wanted a season 3!"
TV SERIES・24 DAYS AGO
Hello Magazine

Kate Hudson has realized one of her dreams and has taken to Instagram to share the incredible news with her 15 million followers. Sharing two pictures of her looking casual in a pair of baggy dip-dyed trousers and a white tank top, and singing into a microphone, the actress announced a surprising career change.
CELEBRITIES・25 DAYS AGO
ComicBook

One of the stars of This Is Us is on the move to a new network in advance of the show's series finale. Deadline reported in March that Chris Sullivan, who plays Toby on the NBC series, will headline a comedy pilot for ABC. His new show is set to be titled The Son In Law.
TV SERIES・24 DAYS AGO

Johnny Depp found humour in a question asked during a Disney executive’s testimony in the ongoing defamation trial brought against ex-wife Amber Heard. In a pre-recorded deposition presented to the court on Thursday (19 May), Tina Newman – who works on the Pirates of the Caribbean franchise – was questioned about Depp’s future in a potential sixth film. “Do you know whether Mr Depp is being considered for a role in Pirates 6?” Heard’s lawyer inquired. To which Newman responded “I don’t know one way or another,” adding that the “decision does not fall within my job responsibilities. It’s...
MOVIES・1 DAY AGO
Hello Magazine

Gwyneth Paltrow is a doting mom to two teenage children, Apple and Moses, who she shares with ex-husband Chris Martin. The family are notoriously private, but over the weekend the award-winning actress gave a rare insight into their upcoming plans - and how they are changing things up this year for Mother's Day.
FAMILY RELATIONSHIPS・24 DAYS AGO
PopCrush

90 Day Fiancé: Before the 90 Days star Johnny Chao is showing off a new look on social media. The reality TV star rocked a fresh-faced look on the show. However, Chao debuted some new facial hair in his most recent post on Instagram. More specifically, he grew a beard and mustache.
TV & VIDEOS・24 DAYS AGO
Deadline

Click here to read the full article. Bass Reeves, a previously announced limited series produced by Yellowstone co-creator Taylor Sheridan, will now be an offshoot of Yellowstone prequel 1883 at Paramount+. The news was revealed as part of MTV Entertainment Studios’ upfront on Wednesday. Now titled 1883: The Bass Reeves Story, the limited series stars Emmy-nominated David Oyelowo as Reeves, a legendary lawman of the Wild West. Known as the greatest frontier hero in American history, and also believed to be the inspiration for The Lone Ranger. Reeves worked in the post-Reconstruction era as a federal peace officer in the Indian...
NFL・2 DAYS AGO
Popculture

Spring is always a big time for engagements and weddings, and two beloved internet personalities are the latest to update their relationship status. On April 18, Rachel "Seltzer" Quirico revealed she and longtime boyfriend Trevor "TorcH" Housten were tying the knot after 17 years together. Both of them are beloved figures in the esports world, with Seltzer notably starring in the Syfy reality show WCG Ultimate Gamer. She's also hosted numerous esports tournaments and events for TV/streaming outlets; she also made a recent appearance on G4 TV's Boosted.
RELATIONSHIP ADVICE・25 DAYS AGO
Deadline

Click here to read the full article. EXCLUSIVE: Saturday Night Live is set for its biggest change in a number of years. Deadline understands that a number of long-featured stars including Kate McKinnon, Aidy Bryant, Kyle Mooney and Pete Davidson are expected to leave the show at the end of this season. It comes after creator Lorne Michaels admitted that he was expecting this year to be a “year of change” for the show. We hear that there may be a big group goodbye, featuring all four the departees, at the end of tomorrow night’s episode, which is hosted by Natasha Lyonne. It’s not...
NFL・11 HOURS AGO