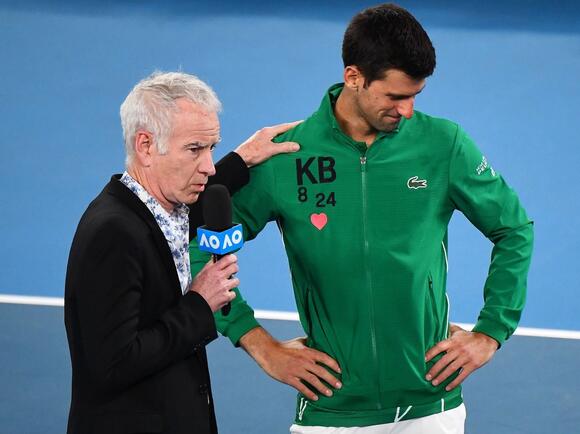 John McEnroe went on an odd rant defending Novak Djokovic live on air, calling the treatment of the Serbian star an "absolute joke."

McEnroe also called Djokovic "gutsy" for travelling to Australia without being vaccinated against coronavirus, then seemingly falsely accused journalists of fabricating the fact that Djokovic broke coronavirus quarantine rules.

Djokovic was deported from Australia on Sunday after a near two-week battle over his visa, which was revoked for a second time after he was found to have provided false information about his movements on a travel declaration forms when entering the country.

"It's sad the way it ended. I watched it play out live," McEnroe said while speaking Monday on ESPN, adding that the saga was "total BS."

"If he decides not to have a vaccine and the Australian authorities say: 'You cannot go down there, unless you're vaccinated, end of story.' It's black or white, he decides whether or not he wants to do it," said the American tennis icon.

"He's got very strong beliefs. He's entitled to those beliefs.

"You're talking about a guy that was potentially about to break Roger Federer and Rafael Nadal's record and that he was willing to go to these lengths."

McEnroe then went on to address Djokovic's failure to isolate after testing positive for COVID-19 in December.

The 34-year-old admitted in an Instagram post earlier this month that he had attended a media event in December just days after contracting the virus because he "felt obliged" to do so.

"And then he met with some journalist, allegedly he spoke to a journalist, in Serbia I believe," said McEnroe. "I don't know the exact details of the dates, but is that proven, is that absolute fact?

"You know, journalists have been known to make..."

McEnroe was then cut off and corrected by his co-host Chris Evert, who pointed out that Djokovic had acknowledged meeting the journalist.

The 62-year-old then went on to criticize the Australian government for its handling of the situation.

"Okay, let's assume that he wasn't going to play but then suddenly he got COVID and then he got an exemption and he can play. You can't tell him after he flies all the way there," he said.

"The idea that the government and these people weren't in cahoots with each other. I'm sorry. I don't buy into that one. They all knew what was going on."

Djokovic looks set to be pay the price for his deportation from Australia for a long time to come after it was confirmed that he would be banned from entering the country for three years.

Though Australia's Prime Minister Scott Morrison said the Serbian could potentially be allowed entry sooner under the "right circumstances," the ban means that in the worst case scenario, he would be unable to compete in the Australian Open until 2025.

He could also miss out on the French Open for the forseeable future.

On Monday, France's Sports Ministry said the world number one could also be barred from competing in the French Open after the country passed a new vaccine pass law that requires people to have a certificate of vaccination to enter public places such as restaurants, cafes, cinemas, and long-distance trains.

"This will apply to everyone who is a spectator or a professional sportsperson," the ministry said.

Rules are rules. It isn’t as if Novak didn’t know - he’s known this for months. Now he has to decide whether he wants to play RG, in which case he needs to get vaxed, or not. It’s his decision.

I admired McEnroe's play as a champion despite his bad boy antics. I've enjoyed his commentary over the years. I disagree with him on this topic.

McEnroe suggested to Insider that Nadal isn't punished for his slow speed of play because he's a tennis legend.
TENNIS・2 DAYS AGO
Insider

"I didn't know how to handle it, because I don't have it often," said former world No. 1 Simona Halep.
TENNIS・19 HOURS AGO
Insider

A Romanian tennis player bounced her racket into the crowd at the French Open, leaving a child in tears

Irina-Camelia Begu has apologized for the unsavory incident, describing it as an "embarrassing moment."
TENNIS・18 HOURS AGO
The Guardian

No escaping Alcaraz: why teenage sensation could be next big thing

For over a decade, men’s tennis has been searching for new stars to follow up the dominance of its big three; Novak Djokovic, Rafael Nadal and Roger Federer. New generations have risen and fallen, waves of hype behind some promising young players have long sputtered out, while other extremely talented players have simply not measured up to their dominance. Deep into their 30s, Nadal and Djokovic have remained the safest bet to win most grand slam titles in recent years.
TENNIS・1 HOUR AGO

The WNBA superstar asked her lawyers to relay a message to her agent: Please bring roses to Cherelle, Griner's wife, before she sat for TV interviews about the star's detainment.
NBA・17 HOURS AGO
Insider

The airplane features images of Maradona, the soccer legend who died of a heart attack in November 2020, on the fuselage and has memorabilia inside.
FIFA・19 HOURS AGO
The Independent

Although the Liverpool players attempted to treat this like any of the many big games they’ve played, it took a mere step on the Stade de France pitch to change that. This is the club’s third Champions League final in five years, but there’s still that extra electrical charge to the air.“It’s the occasion, it’s talking in a press conference here,” Trent Alexander-Arnold said. “There’s different things you do around the game. It’s the special game, the one that everyone wants to play in.“It’s the game of the season.”The hope is that it will also be the game of the...
SOCCER・34 MINUTES AGO