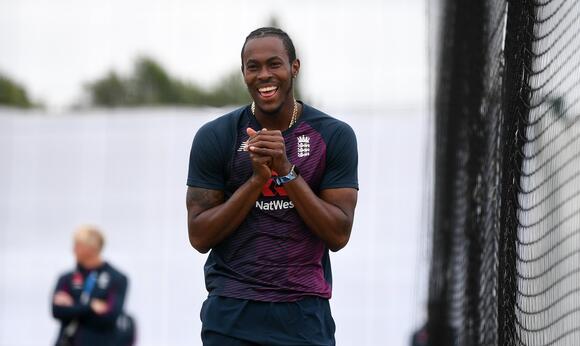 Jofra Archer was back with England for the first time in nearly a year after linking up with the Twenty20 squad ahead of their five-match series against the West Indies.

Archer is still some way off a return after heading to his native Barbados following a second operation on a longstanding elbow complaint last month.

But the fast bowler, whose most recent international appearance came in March last year, was in an England training top on Tuesday and was seen doing some sprinting drills and catching up with team-mates.

It is understood he will not be bowling in the nets or taking part in fielding drills with England, who are without several regulars in the Caribbean for the white-ball series against the Windies which starts on Saturday.

But this represents a step in the right direction in Archer’s rehabilitation, with the quick entering England’s bubble on Monday.

A year on from her Olympics disappointment, Beth Mead is preparing for a home Euros feeling she has been in the finest form of her career – and can produce even better.The Arsenal winger was among the notable players not included by Hege Riise in the Great Britain squad for last summer’s Tokyo Olympics.Mead has bounced back in some style, going on to register 11 goals and eight assists across Arsenal’s 2021-22 Women’s Super League campaign and score 12 times in 10 England appearances.Having earlier this week been confirmed as part of the Lionesses’ provisional squad for this summer’s Euros...
WORLD・1 HOUR AGO
The Guardian

Most fans don’t ask for much when they go to an Australian sports stadium. A fair ticket price, a reasonable seat, accurate scoreboard, quality alcoholic beverage and a meat pie somewhere between corpse cold and Hades hot. The stadium itself – the architecture, access points, the jiggery-pokery on the big screens before and after – is pretty immaterial. We’re there for the show on that gleaming green field. Everything else is window-dressing.
SPORTS・26 MINUTES AGO
The Independent

Pep Guardiola maintains that winning the Premier League is tougher than achieving Champions League success.Guardiola’s Manchester City side are hoping to secure their fourth domestic title in five seasons on Sunday.Victory over Aston Villa in their final game will see City pip second-placed Liverpool to the crown regardless of the result of the Merseysiders’ clash with Wolves.Liverpool could still steal some of their limelight by going on to win the Champions League – something which has eluded Guardiola during his City tenure – but the Spaniard believes the Premier League is the greater prize.He said: “I would say it’s more...
PREMIER LEAGUE・4 HOURS AGO
The Independent

Naomi Osaka was ‘very worried’ about returning to French Open

Naomi Osaka admitted she was “very worried” about returning to Roland Garros after last year’s furore that led to her withdrawal.Osaka announced on the eve of the tournament that she would not be fulfilling her media duties and, after being threatened with expulsion, pulled out ahead of her second-round match and opened up about her mental health struggles.Speaking to reporters in Paris, the Japanese star said: “I’m not going to lie. When I first came here, I was very worried. Of course I also didn’t like how I handled the situation but I was worried that there were people that...
TENNIS・5 HOURS AGO

Relegation-threatened Burnley and Leeds United have asked the Premier League to form a panel to decide if Everton should be punished for breaching financial rules. A joint letter from Burnley and Leeds was sent a week ago asking for the league to have an independent commission rapidly look into Everton's financial losses. The letter was sent before Everton secured its league survival with a game to spare on Thursday night. Burnley and Leeds are trying to avoid being the third and final team relegated on the final day of the season on Sunday. The two clubs want to know where...
PREMIER LEAGUE・3 HOURS AGO