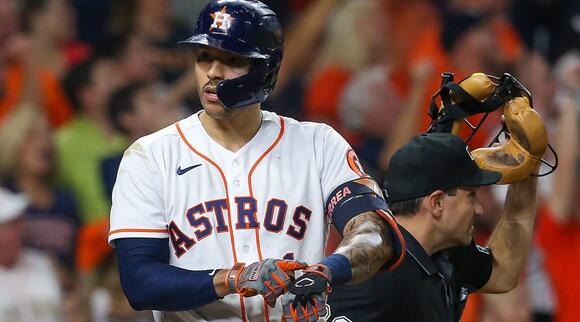 The Astros, Rays, White Sox, Red Sox and Yankees have to shore up these weaknesses to return to the postseason in 2022.

With the new year comes new resolutions. Though the statute of limitations to give or receive a “Happy New Year” greeting may have passed , that doesn’t mean the opportunity for self-improvement has expired. Every team has some strides to make before Opening Day, even as the sport itself faces an existential crisis amid an inactive collective bargaining negotiation between the league and the players association.

But that won’t stop us from speculating on what kinds of big-ticket moves could be in store for the league’s best teams. Last week, Will Laws ran through the biggest need facing the five National League playoff teams from 2021. Now, it’s time for the American League playoff clubs to come under the microscope and see how they can most effectively position themselves for October glory once the hot stove flame flickers back to life.

The glaring hole for Houston resides at shortstop, where mainstay Carlos Correa remains on the open market . A reunion is certainly not out of the question, but the Astros will have plenty of competition for the All-Star’s services. Houston is also thin in center field, where the only healthy in-house options are Chas McCormick and Jose Siri. There aren’t any top-line options on the open market that would present as real difference makers, so opting with those two or looking to make a trade would seem to be the only viable options.

Houston’s biggest area of need might just be its bullpen. The group ranked a middling 14th in fWAR last season and has lost three key contributors (Brooks Raley, Kendall Graveman and Yimi García) to free agency. Ryan Pressly remains steady at the back end, but more impact arms will be necessary for the Astros to remain among the AL’s elite. Kenley Jansen is the biggest name available in free agency, along with former Astro Collin McHugh. Houston is currently $18 million under its 2021 payroll of $188 million, which was the highest in franchise history.

The Rays boast better organizational depth than any other franchise, particularly in the pitching department. But with Tyler Glasnow out for most (if not all) of 2022 while recovering from Tommy John surgery , they are lacking an ace-caliber arm. The Rays likely don’t view this as much of an issue, trusting their development and depth to be more than enough to carry them through.

But reinforcements are likely needed to repeat in a loaded division, even if they’re of the one-year variety. That strategy paid off a year ago with the additions of Michael Wacha and Rich Hill. Perhaps Tampa Bay would combine a short-term contract commitment with top-end talent by pursuing left-hander Carlos Rodón, who demonstrated Cy Young Award-caliber production but has real durability concerns. If the Rays are not shopping at that end of the market, then other mid- and lower-tier options are plenty, such as Zack Greinke, Michael Pineda, Tyler Anderson or Garrett Richards.

The White Sox were the beneficiaries of a relatively healthy starting rotation last season, with 145 of their 162 starts being made by their top five arms. But that doesn’t mean the 2022 picture is set in stone: Rodón could very well sign elsewhere in free agency, while Dallas Keuchel had a 5.18 ERA over 156 ⅓ innings. Chicago would do well to shore up this group, even if the front office just targets more depth pieces over higher-impact arms.

Second base is also a pretty glaring hole at the moment, with few options available on the open market. The White Sox do possess an intriguing trade piece in Craig Kimbrel, however, after picking up his $16 million option for 2022. Chicago’s bullpen is high on talent in the back end, making Kimbrel something of an expendable luxury. Finding a way to flip him to address other areas of need could be the most sensible path toward improvement this offseason. The White Sox are currently $51 million over their record payroll from 2021 ($129 million), so moving a high-priced surplus reliever could be a near certainty.

Sign up to get the Five-Tool Newsletter in your inbox every week during the MLB offseason .

The Red Sox needed to stock up on pitching depth this offseason, and though they lost out on Eduardo Rodríguez , they did add to their rotation by bringing in James Paxton , Wacha and Hill. Now, the team must move to improve its bullpen, particularly if Garrett Whitlock successfully adapts to being a starter.

All-Star closer Matt Barnes and setup man Adam Ottavino were disasters in the second half. Each posted a 6.48 ERA after the break, combining for five blown saves and 24 walks in 41 ⅔ innings. Boston will need to add multiple reliable arms to address what’s clearly a glaring need. There are multiple options still on the table, namely Ryan Tepera, former Red Sox reliever Joe Kelly, Jansen and McHugh.

The longer the lockout lasts, the more speculation will swirl about the deep-pocketed Yankees swooping in for big-name acquisitions. Star shortstops Carlos Correa and Trevor Story are still on the market, as is first baseman Freddie Freeman, who notably did not come to an agreement to re-sign with the Braves before the lockout freeze set in. The Yankees always have money to spend, and have not made any notable acquisitions yet this offseason . Signing any one of the players above would surely quell some rising frustration from the fanbase after the offseason headlines have been dominated by the Mets .

If neither of those three end up in pinstripes, there are still viable options, including bringing back Anthony Rizzo. A trade could also be in the works. A’s first baseman Matt Olson is the biggest-name target potentially available as Oakland looks to rebuild. The A’s have already let Mark Canha, Starling Marte and Yan Gomes sign elsewhere, while two-time AL Manager of the Year Bob Melvin has left for San Diego. Olson is among the best hitters in the league and certainly would be a boon for the Yankees offense. The starting rotation could use some added depth as well, but it’s a safe bet that whenever teams are able to make moves, New York figures to be among the most active of the bunch.

The suspension comes after Harvey testified in the Eric Kay trial that he supplied Tyler Skaggs with opioids while the two were teammates.
BALTIMORE, MD・5 HOURS AGO

The former Saints quarterback will leave his studio role with the network after just one season.
NEW ORLEANS, LA・2 DAYS AGO
Sports Illustrated

If fantasy managers in your league have dropped any of these players, pick them up now.
MLB・13 HOURS AGO
Sports Illustrated