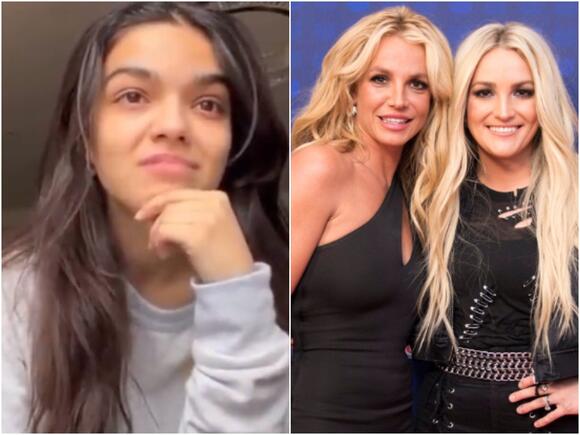 "West Side Story" star Rachel Zegler apologized on Twitter for sharing a video of herself doing a dramatic read of one of Britney Spears' tweets about her sister.

Spears is currently engaged in a feud with her younger sister about Jamie Lynn's upcoming memoir, "Things I Should Have Said," which touches on the sisters' fallout in 2020.

During an interview with ABC , it was revealed that Jamie Lynn writes about Britney once locking them in a room while brandishing a knife when they were kids.

In response to this, Britney wrote : "Jamie Lynn... congrats babe! You've stooped to a whole new level of LOW... I've never been around you ever with a knife or would I ever even think to do such!!! The only knife I ever saw you with at home was cutting the biggest pieces of squash I ever saw in my life and it was way too big for me to cut... So please please stop with these crazy lies for the Hollywood books!!!"

Zegler, who recently made her film debut in "West Side Story," received backlash from fans for sharing a video of her reading this statement in the style of an audition monologue. Zegler has since deleted the post and said she meant "no disrespect" to Britney and her fans.

"Anyone who knows me knows how much I love Britney and am rooting for her always," the 20-year-old actress wrote on Twitter. "While I meant no disrespect whatsoever, I should have thought about how this could be perceived, and I'm so sorry for upsetting or disappointing anyone."

She continued: "This is not a situation to be taken lightly, and we should all be lifting Britney up in this pivotal time. Thanks for hearing me out, and a big thank you to all who held me accountable."

Last week, Britney had made a series of Twitter posts slamming her sister for the memoir saying that the "Zoey 101" star "never had to work for anything."

In a statement posted to Instagram by Jamie Lynn last week, the former child actor says that it's "exhausting" that her conversations with Britney in private differ from what Britney says on social media.

"That being said, I hate to burst my sister's bubble, but my book is not about her," Jamie Lynn wrote. "There are no sides, and I don't want drama, but I'm speaking my truth to heal my traumas, so I can close this chapter and move forward, and I wish my sister could do the same."

Britney responded to this with a statement on Twitter saying she loves her sister "unconditionally" but still says Jamie Lynn is "making up" things about Britney in her memoir.

She wrote: "What Dad did to me, they don't even do that to criminals... so for you to sit back and act completely aloof to what has happened to me is honestly insane to me!!!"

Khloe Kardashian responded to a tweet with a photo of her standing alone with a glass of wine, next to Machine Gun Kelly and Megan Fox together.
CELEBRITIES・22 HOURS AGO
Insider

Just a little over two months after Whoopi Goldberg was suspended from “The View” for insensitive remarks about the Holocaust, former “The Talk” co-host Sharon Osbourne is weighing in on the situation. Osbourne also takes aim at the double standards she believes are in the TV industry.
CELEBRITIES・29 DAYS AGO
Popculture

Netflix has canceled another one of its major shows, with this one getting the ax after only two seasons. Variety reports that hit sci-fi drama Raising Dion has been dropped by the streamer, following its recent season debut. The news seems to have been revealed by series star Sammi Haney, who shared the news with fans on Instagram. "Sad to say that Raising Dion is CANCELED [sic] Thank you for all of the amazing support we got from all of our wonderful fans!" Haney wrote, in part. "Season 2 was a success, equal to Season 1, even if just looking at how many people watched all of it and wanted a season 3!"
TV SERIES・29 DAYS AGO

Ryan Seacrest is weighing in on the ongoing court battle between the Kardashian-Jenner family and Blac Chyna.According to a new report from Radar, the TV producer made some bombshell claims in his deposition, which the famous family is trying to get blocked from the jury. As reported by the outlet, Seacrest — who is scheduled to take the stand in the trial — shockingly revealed in his deposition that he wanted Chyna's show with Rob Kardashian, Rob & Chyna, to move forward, despite the Kardashian-Jenner squad's claim that there was fear over Rob's safety as a result of the exes'...
CELEBRITIES・29 DAYS AGO
Insider

Kristen Stewart says she left the set of 'Crimes of the Future' with no idea what she was shooting, but loved the gory scenes

Too $hort has worked with a score of legendary producers throughout his almost 40-year career, from Jermaine Dupri and Lil Jon to Daz Dillinger and DJ Pooh. But one big-name beatsmith he passed up the opportunity to work with was Kanye West. During a recent interview with VladTV, the Bay...
CELEBRITIES・29 DAYS AGO
hotnewhiphop.com

50 Cent cast doubt on Megan Thee Stallion's recent comments about not having been in an “intimate relationship” with Tory Lanez, prior to the infamous shooting in July 2020 which left her with gunshot wounds. Megan's comment came during a recent interview with Gayle King, during which she...
CELEBRITIES・29 DAYS AGO

90 Day Fiancé stars Anna-Marie Campisi and Mursel Mistanoglu have added a little boy to their family! The couple, who tied the knot on Season 7 of the TLC reality show, announced on Instagram this week that their son, Gokhan John, had been born via a surrogate on Monday, April 11 after the couple's initial struggle with fertility.
FAMILY RELATIONSHIPS・29 DAYS AGO
Outsider.com

Spring is always a big time for engagements and weddings, and two beloved internet personalities are the latest to update their relationship status. On April 18, Rachel "Seltzer" Quirico revealed she and longtime boyfriend Trevor "TorcH" Housten were tying the knot after 17 years together. Both of them are beloved figures in the esports world, with Seltzer notably starring in the Syfy reality show WCG Ultimate Gamer. She's also hosted numerous esports tournaments and events for TV/streaming outlets; she also made a recent appearance on G4 TV's Boosted.
RELATIONSHIP ADVICE・29 DAYS AGO
Insider

Smith spoke about his experience with ayahuasca in season four of Netflix's "My Next Guest Needs No Introduction With David Letterman."
CELEBRITIES・1 DAY AGO

Geroge Wendt, who played Norm on the classic TV show Cheers, decided to be like Jack when he was in public. We mean Jack Nicholson here. The famed movie actor seemingly did not mind being noticed when out among the non-Hollywood crowd. Nicholson’s attitude about this did ring a bell for Wendt during his show’s incredible run on NBC and in reruns today.
CELEBRITIES・29 DAYS AGO
hotnewhiphop.com

Kim Kardashian's ex-husband, Damon Thomas, continues to "wish her the best," despite any false narratives about their past relationship. The 51-year-old sat down with DJ Vlad, looking back at his marriage with now-billionaire businesswoman Kim Kardashian in the early 2000s. He believes he's played a "part in their journey," however, he doesn't want to be known as "Kim Kardashian's husband" and wants to "get in control of [his] narrative," as many people fail to recognize he has won Grammys and even made it to the Oscars.
RELATIONSHIPS・29 DAYS AGO
Insider

The "King Richard" star spoke about his music career in a new episode of Netflix's "My Next Guest Needs No Introduction With David Letterman."
CELEBRITIES・2 DAYS AGO
The Independent

Helen Skelton has revealed that she has separated from her husband, rugby player Richie Myler.The Countryfile host announced the news in an Instagram statement, writing that Myler has “left the family home”.Skelton’s announcement comes just four months after they welcomed their third child.“Very sad to say that Richie and I are no longer a couple,” she wrote. “He has left the family home. We will be doing our best to co parent our small children.”Skelton, who married Myler in 2013, accompanied the post with two broken heart emojis.The pair have three childen together: Ernie, aged six, Louis, aged...
CELEBRITIES・29 DAYS AGO
PopCrush

90 Day Fiancé: Before the 90 Days star Johnny Chao is showing off a new look on social media. The reality TV star rocked a fresh-faced look on the show. However, Chao debuted some new facial hair in his most recent post on Instagram. More specifically, he grew a beard and mustache.
TV & VIDEOS・29 DAYS AGO
OK! Magazine

Two years later and Stassi Schroeder is finally opening up about her traumatic firing from Vanderpump Rules. In her newly released book, Off With My Head: The Definitive Basic Bitch Handbook to Surviving Rock Bottom — out Tuesday, April 26 — the former Bravo star, 33, chronicled her June 2020 cancelation, while being 10 weeks pregnant with daughter Hartford, after a resurfaced podcast clip of her revealing she and costar Kristen Doute told the police via a tip line that a Black woman accused of robbery could be their former costar Faith Stowers made its rounds.While Schroeder admitted she had...
CELEBRITIES・29 DAYS AGO
Daily Mail

Royal fans go wild for unearthed clip of Princess Diana telling 'sulky' Prince William, 4, that 'Harry will have all the fun' as she tempts him to come out of his hiding place at Highgrove in 1986

Royal enthusiasts have gone wild for an unearthed clip which shows Princess Diana telling a 'sulky' Prince William, then aged four, that 'Harry will have all the fun' as she tempts him to come out of his hiding place. In the old footage, shared widely on TikTok recently, the late...
CELEBRITIES・29 DAYS AGO
TMZ.com

Ne-Yo and his wife, Crystal Renay, are as serious as they can be about giving their marriage another go -- TMZ's learned, they just walked down the aisle again, and they did it up big!!!. Witnesses tell TMZ ... Ne-Yo and the former reality star got re-hitched Sunday night on...
CELEBRITIES・29 DAYS AGO