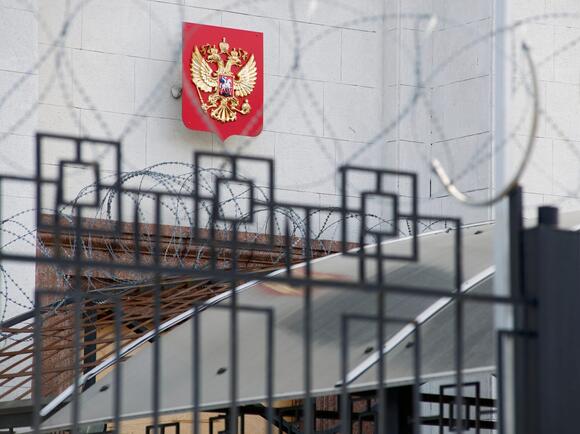 A new report says Russia has been quietly reducing staff at its embassy in the Ukrainian capital of Kyiv amid fears of an impending conflict, but Moscow denies it, arguing that the diplomatic outpost is operating normally.

The New York Times reported this week a group of 18 people, largely family members of Russian diplomats, left Ukraine for Moscow on January 5. Over the next few days, around 30 more people from Kyiv and the consulate in Lviv reportedly departed.

And diplomats at two other outposts in Ukraine have been instructed to prepare to leave, The Times reported, citing a senior Ukrainian security official.

US and Ukrainian officials reportedly said that the Russian move could be interpreted as preparation for conflict, a feint, or some sort of propaganda move, if not some mixture of the three. In an outbreak of war, embassy staff could become prisoners of war or targets for information via interrogation.

Russia has denied the report from The New York Times, telling Russian media outlet Interfax that the embassy in Kyiv is operating normally.

Russian foreign ministry spokeswoman Maria Zakharova told reporters Tuesday that "despite the provocations and the aggressive behavior of local radicals, I repeat that our missions are operating as usual."

The Ukrainian foreign ministry told Reuters it had not received any word from Moscow about an evacuation of its embassy and consulates and that it did not have any plans to thin out or evacuate its diplomatic outposts in Russia.

Reports that Russia may be thinning out its outposts in Ukraine come as high-level talks between Russia and the US and NATO over the past week have reached an impasse, stalling with no clear solution on the table. Russia continues to maintain a significant troop presence near the Ukrainian border.

Russia has repeatedly denied having plans to invade its neighbor, but the international community hardly persuaded. A senior US diplomat told her Russian counterpart last week that Russia could prove it had no hostile intentions toward Ukraine by pulling the roughly 100,000 troops it has in the area away from the Ukrainian border.

Russia has so far made no commitment to de-escalation, often presenting itself as the victim while making security demands of the US and NATO they have said they cannot accept .

Some US officials and experts have put forward the idea that talks were destined for failure and that Russia may have been planning to use them as a pretext for conflict , and on Friday, it was reported that US intelligence indicated that Russia had positioned operatives for a "false-flag operation" that could potentially justify a Russian military offensive.

The US has warned that Russia will face severe consequences, mainly economic and financial penalties, should it take military action against Ukraine.

Kamila assisting in any international discussions scares the whoopie out of me.She has zero credibility or listening skills.

It’s very interesting to see how so many Americans sitting on their couches, most of whom never went to and mostly will never go to Ukraine or Russia, know so much about Ukraine and Russia and are such deep experts in these complicated relationships. If you were curious at least a little bit more you should first of all take a geographical globus in your hands, imagine how many families are Russian-Ukrainian, how complicated this history is and also sincerely ask yourself, what does America do across the ocean so far from the US?!? Sounds very similar to Afghanistan, Vietnam, and many other scenarios

we need to turn this into another Afghanistan for Russia, funnel in millions of dollars of military weapons to Ukraine.

International order will be thrown out the window if Russia is able to escape consequences over its invasion of Ukraine, US Gen. Mark Milley told CNN.
POLITICS・28 DAYS AGO
WashingtonExaminer

When President Joe Biden named Kamala Harris as his running mate, he promised his former campaign rival would be one of the most influential voices in the White House.
PRESIDENTIAL ELECTION・28 DAYS AGO

The Oscar-winning filmmaker, who interviewed Putin between 2015 and 2017, said he wanted to ask what he was thinking the day before the invasion.
CELEBRITIES・2 DAYS AGO
Business Insider

"The West made the fatal mistake of becoming reliant on Russian energy supplies," Mikhail Khodorkovsky said. "The West has to pay for its mistakes."
ENERGY INDUSTRY・29 DAYS AGO

Coup against Putin would be triggered if one of his top officials refused to carry out a nuclear strike, Bellingcat expert says

"Because after the refusal to comply with the order of the king, everything will go down very quickly," said Bellingcat investigator Christo Grozev.
POLITICS・1 DAY AGO
The Independent

Vladimir Putin is so popular in Russia that he has the “political space” to withdraw his forces from Ukraine, said Boris Johnson.The prime minister said the Russian president still has “massive backing” from his own people despite international outrage over the invasion.“The Russian public overwhelming back Putin,” Mr Johnson told Talk TV. “Therefore he has the political margin for manoeuvre from within Russia … Putin has far more political space to back down, to withdraw.”The PM added: “There could come a point when he could say to the Russian people, ‘The military-technical operation that we launched in Ukraine has...
POLITICS・27 DAYS AGO
Business Insider

"No one wants to see the outbreak of a third world war," Chinese Foreign Ministry spokesman Wang Wenbin told reporters during a briefing.
CHINA・28 DAYS AGO

Sign up for the Fortune Features email list so you don’t miss our biggest features, exclusive interviews, and investigations. Two Russian oligarchs found dead alongside their families within 48 hours of each other are the latest high-profile executives to die in mysterious circumstances since the beginning of the year.
PUBLIC SAFETY・29 DAYS AGO
Business Insider

Everyone wants Zelensky's green jacket, but it won't be back in stock until Ukraine's 'victory', company says

Stocks of the fleece are unlikely to be replenished until the war is over, the company that makes the jacket told Insider.
APPAREL・2 DAYS AGO
Business Insider

The Utah senator also said the West could confront Russian-allied nations with an ultimatum: "You are either with us, or you are with Russia."
CONGRESS & COURTS・2 DAYS AGO
Business Insider

The former F-35 test pilot Billie Flynn told The Aviationist that moving to the "cosmic spaceship" that is the F-35 was too much to ask of MiG pilots.
AEROSPACE & DEFENSE・28 DAYS AGO