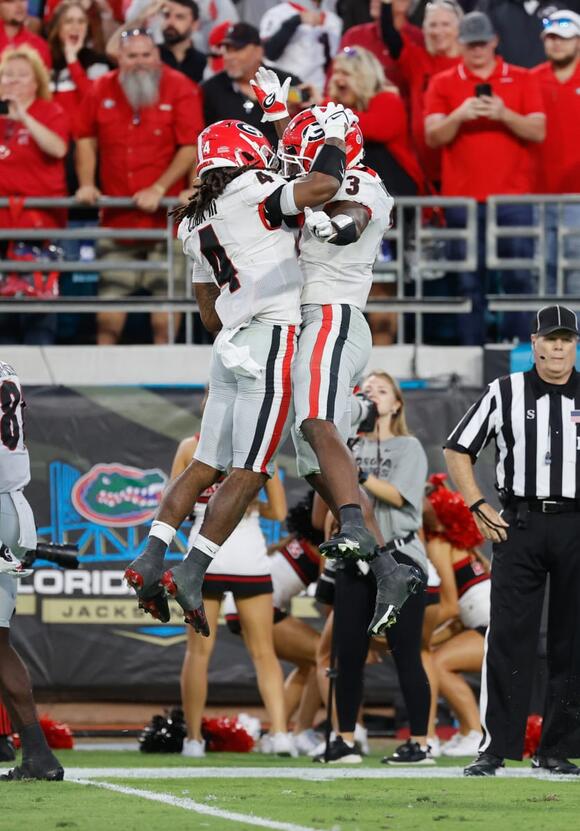 Could either Bulldog stay home and become a Falcon next season?

It's been a little over a week since the Atlanta Falcons and Georgia Bulldogs saw their seasons come to an end.

For the Falcons, it concluded with an anticlimactic loss to the New Orleans Saints. But for the Bulldogs, it ended in the school's first national championship since 1980.

Two of the Georgia's dynamic running backs, James Cook and Zamir White, declared for the NFL Draft over the past few days, opening the door for any of the 32 teams to add them to the team in April's NFL Draft.

The Falcons' leading rusher from 2021, Cordarrelle Patterson, is set to hit free agency and is due a big raise after an impressive season . Patterson notched career bests in rushing yards (618), receiving yards (548) and touchdowns (11) . But Patterson is set to celebrate his 31st birthday over the offseason and it's tough to figure out if he will be able to reach these heights for next season and beyond.

Not signing Patterson would increase the team's need to find a replacement, but the Falcons could benefit from drafting a younger player to complement Patterson and fill in when he's unable to go.

Cook and White will both find themselves on NFL rosters next season, and keeping them in the Peach State could excite local fans and improve the team's depth at the position.

The team hasn't drafted a running back since Qadree Ollison in 2019, but he was cut and re-signed and is now about to become a free agent. With Patterson also hitting the open market, Mike Davis is the only running back under contract for Atlanta.

A grand jury indicted former Georgia linebacker Adam Anderson on Tuesday and charged him with rape. Anderson will be arraigned
NFL・27 DAYS AGO
Falcon Report

Projecting the Falcons Offensive Depth Chart: Who Starts at QB?

Who will make the 53-man roster on the offensive side of the ball?
ATLANTA, GA・2 DAYS AGO
Falcon Report

The third-round pick has some massive expectations.
ATLANTA, GA・2 DAYS AGO
Falcon Report

Some kind words from a respected player.
ATLANTA, GA・1 DAY AGO

The third-round pick is looking to make history in Atlanta.
ATLANTA, GA・1 DAY AGO
Falcon Report

After two seasons away from the NFL, Gurley has moved on and is happy with his current situation
ATLANTA, GA・23 HOURS AGO
Falcon Report

Follow along with Falcon Report for up-to-date news on the NFL firings and hirings
ATLANTA, GA・1 DAY AGO

Which of the Falcons young pieces make the cut?
ATLANTA, GA・2 HOURS AGO
Falcon Report

'We Have Something to Prove': Falcons Coach Arthur Smith Wants to Win Now

Atlanta Falcons head coach Arthur Smith is ready to win, and has an urgency to do so…now.
ATLANTA, GA・1 DAY AGO
Falcon Report

Falcons on 'Hard Knocks'? Here's How Atlanta Lands on HBO

The Falcons could be featured on HBO's longtime documentary series.
ATLANTA, GA・2 HOURS AGO
Falcon Report

How does general manager Terry Fontenot's first draft grade out after year one?
ATLANTA, GA・1 HOUR AGO

Super Bowl LII MVP reunites with Frank Reich, but don’t expect him to see much action.
INDIANAPOLIS, IN・37 MINUTES AGO
Falcon Report

One of the longest-tenured Falcons appears to have played his final down with Atlanta.
ATLANTA, GA・4 HOURS AGO
Sports Illustrated

The four-time MVP didn’t join the Packers for voluntary OTAs to start the week.
GREEN BAY, WI・34 MINUTES AGO