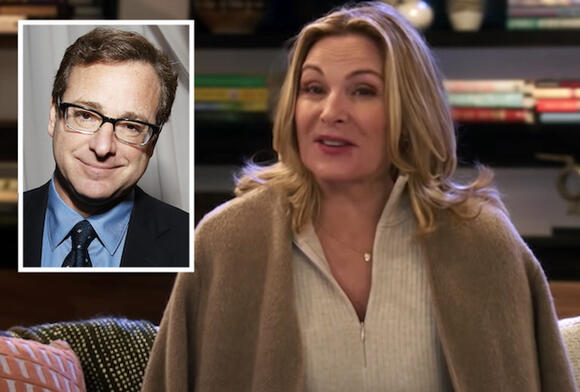 Tuesday’s How I Met Your Father premiere tips its hat to Kim Cattrall’s predecessor.

The first episode of the How I Met Your Mother sequel series concludes with a title card in honor of the late Bob Saget , who died on Jan. 9 at the age of 65.

Saget for HIMYM ‘s entire nine-season run provided the voice of Future Ted Mosby, who famously framed the CBS sitcom by telling his kids, from off-camera, about how he wanted to get back together with Aunt Robin how he met their late mother, Tracey. Josh Radnor, who starred as present-day Ted, previously paid tribute to Saget, referring to the comedian as “the kindest, loveliest, funniest, most supportive man. The easiest person to be around. A mensch among mensches. 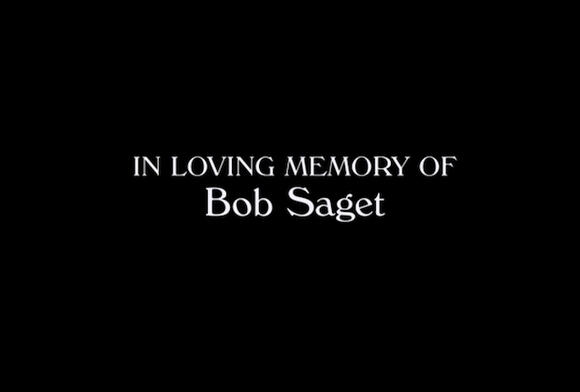 “There are people who leave the earth and you’re haunted by all the things you didn’t tell them, all the love that was unexpressed,” Radnor’s statement continued. “Luckily that wasn’t the case with Bob. We adored each other and we told each other. I’m endlessly grateful that HIMYM brought Bob Saget into my life. I’ll hear his voice in my head for the rest of my days.”

Whereas Saget served as an omniscient narrator on HIMYM , the spinoff places Cattrall front and center as the older version of Hilary Duff’s Sophie. The series premiere not only reveals how the two series are connected , but provides a new framework for the central mystery surrounding Dad .

Scroll down to see additional tributes from the HIMYM cast and EPs, then let us know if you were pleased to see HIMYF pay its respects to Saget.

Click here to read the full article. Jon Cryer is getting ready to return to primetime: The Two and a Half Men alum is in talks to star in an NBC comedy that is nearing a pilot order, our sister site Variety reports. The untitled multi-cam comedy would star Cryer as Jim, who gets an amicable divorce from his wife Julia but continues living with her in their family home so they can both raise their kids and take turns taking care of them. It gets more complicated, though, “when the owner of his favorite sports team enters the picture and...
TV & VIDEOS・5 DAYS AGO
TVLine

Click here to read the full article. Bupkis just gained a lot. Four-time Emmy winner Edie Falco appeared on-stage with Pete Davison at the NBCUniversal Upfront on Monday morning to announce that she has boarded the cast of Bupkis, the Peacock comedy written by and starring the SNL funnyman — and in which she will play his mom. Bupkis is described as “a heightened, fictionalized version of Pete Davidson’s real life, combining “grounded storytelling with absurd elements from the unfiltered and completely original worldview for which Pete is well known.” Davidson is also an executive producer on the Broadway Video production, as are...
CELEBRITIES・5 DAYS AGO
TVLine

Click here to read the full article. It’s the Bob’s Burgers/Blade Runner crossover you didn’t know you needed. TVLine’s exclusive sneak peek of Sunday’s finale (Fox, 9/8c) finds a worried Belcher family snooping through Tina’s diaries to stop “a mission that could get her into a lot of trouble,” according to episode’s official synopsis. And as you’ll see, they discover a lot more than they bargained for. The show’s voice cast includes H. Jon Benjamin as Bob, John Roberts as Linda, Dan Mintz as Tina, Eugene Mirman as Gene, Kristen Schaal as Louise and Larry Murphy as Teddy. And while the season may...
TV SERIES・1 DAY AGO
Hello Magazine

Laughter erupted in courtroom after Johnny Depp said he doesn’t watch his own movies and couldn’t recall the question he was asked. “I don’t watch them. I feel better not watching them. What was the question again?” Mr Depp said to laughter from the room. Johnny Depp trial – latest updates“Order in the court, or I will have you removed,” Judge Azcarate said. “Understood? Thank you.”The defamation trial between Mr Depp and Amber Heard began on Monday 11 April in Fairfax, Virginia following Mr Depp’s lawsuit against his ex-wife in March 2019. Mr Depp is arguing that she defamed him...
CELEBRITIES・26 DAYS AGO
Whiskey Riff

It’s no secret that Tim McGraw and Faith Hill loved their roles on 1883, as they’ve expressed their best experiences on the show, as well as their respect for their characters, James and Margaret Dutton. However, it appears that they have no intentions on reprising their 1883 roles...
CELEBRITIES・2 DAYS AGO
Popculture

Netflix has canceled another one of its major shows, with this one getting the ax after only two seasons. Variety reports that hit sci-fi drama Raising Dion has been dropped by the streamer, following its recent season debut. The news seems to have been revealed by series star Sammi Haney, who shared the news with fans on Instagram. "Sad to say that Raising Dion is CANCELED [sic] Thank you for all of the amazing support we got from all of our wonderful fans!" Haney wrote, in part. "Season 2 was a success, equal to Season 1, even if just looking at how many people watched all of it and wanted a season 3!"
TV SERIES・25 DAYS AGO
SheKnows

Click here to read the full article. It seems like everyone was rooting for Renée Zellweger and Ant Anstead to get together, including an unexpected duo: the Property Brothers. Drew and Jonathan Scott recently revealed that they were the ones that ended up getting Zellweger and Anstead to meet, and subsequently fall in love. And their hard work ended up paying off! Back on April 14, 2022, the Scott brothers sat down with ExtraTV to talk about everything from Drew’s upcoming fatherhood to Jonathan loving GF Zooey Deschanel’s Vanity Fair gown. While we loved the entire interview, we’re losing it over...
CELEBRITIES・27 DAYS AGO

After weeks of silence, Chris Rock has finally addressed his now-infamous incident with Will Smith at March's 94th Annual Academy Awards. During another sold-out show at Baltimore's Lyric Performing Arts Center on Friday, Rock directly referenced the slap, but only spent a second on it before moving on with his set.
BALTIMORE, MD・27 DAYS AGO
People

Paulina Gretzky walked down the aisle in Vera Wang!. The bride shimmered during her wedding with pro golfer Dustin Johnson on Saturday at Tennessee's Blackberry Farm. Gretzky showed off the stunning look on Instagram Monday in a photo of the newlyweds kissing. "4/23/22♥," she simply captioned the post. For...
BEAUTY & FASHION・25 DAYS AGO
Hello Magazine

Gwyneth Paltrow is a doting mom to two teenage children, Apple and Moses, who she shares with ex-husband Chris Martin. The family are notoriously private, but over the weekend the award-winning actress gave a rare insight into their upcoming plans - and how they are changing things up this year for Mother's Day.
FAMILY RELATIONSHIPS・25 DAYS AGO
TVLine

Click here to read the full article. Mary J. Blige‘s icon status was made official at the 2022 Billboard Music Awards. The Power Book II: Ghost star was honored with the BBMAs’ coveted Icon Award during Sunday’s ceremony on NBC. And who better to receive such a title? Blige boasts an incredible 10-for-10 record at the BBMAs, having won every trophy for which she has ever been nominated, including Female Artist of the Year in 2006. “The way the world is now, I think people think icons are born that way, that they become a legend overnight,” Blige began. “But that is definitely...
CELEBRITIES・6 DAYS AGO

One of the stars of This Is Us is on the move to a new network in advance of the show's series finale. Deadline reported in March that Chris Sullivan, who plays Toby on the NBC series, will headline a comedy pilot for ABC. His new show is set to be titled The Son In Law.
TV SERIES・25 DAYS AGO
hotnewhiphop.com

It seems Coi Leray is getting fed up with the drama. She and her father, Benzino, have not seen eye to eye for quite some time, and despite numerous attempts to mend their relationship, they keep ending up back at square one. Yesterday, 50 Cent, whose been feuding with Benzino...
CELEBRITIES・27 DAYS AGO
Outsider.com

“NCIS: Los Angeles” star Daniela Ruah absolutely killed it on the red carpet and stage last night at the International Portuguese Music Awards. While everyone at home was preparing for tonight’s “NCIS: Los Angeles” episode, Daniela Ruah was getting all dressed up to host the IMPA Awards. The ceremony took place at the Providence Performing Arts Center in Providence, Rhode Island, on Saturday, April 23.
LOS ANGELES, CA・27 DAYS AGO
PopCrush

90 Day Fiancé: Before the 90 Days star Johnny Chao is showing off a new look on social media. The reality TV star rocked a fresh-faced look on the show. However, Chao debuted some new facial hair in his most recent post on Instagram. More specifically, he grew a beard and mustache.
TV & VIDEOS・25 DAYS AGO
Popculture

Spring is always a big time for engagements and weddings, and two beloved internet personalities are the latest to update their relationship status. On April 18, Rachel "Seltzer" Quirico revealed she and longtime boyfriend Trevor "TorcH" Housten were tying the knot after 17 years together. Both of them are beloved figures in the esports world, with Seltzer notably starring in the Syfy reality show WCG Ultimate Gamer. She's also hosted numerous esports tournaments and events for TV/streaming outlets; she also made a recent appearance on G4 TV's Boosted.
RELATIONSHIP ADVICE・26 DAYS AGO
Daily Mail

Katy Perry reacted quite hilariously to a Top 11 contestant on American Idol during a unique song challenge on Monday night's episode. Each of the remaining contestants were given a song to perform by each judge - Perry, Lionel Richie and Luke Bryan - with the singer selecting one and then tasked with guessing which judge picked that song for him or her.
MUSIC・26 DAYS AGO
TVLine

Why Ghosts Is Now Poised to Get Even Bigger — Plus, the Story Behind CBS' Trimmed Thursday Sitcom Slate

Click here to read the full article. For the first time in a decade (‘member when Person of Interest used to air at 9?), CBS’ newly released fall schedule features only two sitcoms on Thursday, with Young Sheldon and Ghosts — TV’s top two comedies — leading into the freshman dramedy So Help Me Todd, followed by Season 2 of CSI: Vegas. The shift was largely dictated by the fact that CBS cancelled United States of Al, B Positive and How We Roll, while greenlighting zero new sitcoms for the 2022-23 season. “You play the hand you’re dealt,” CBS Entertainment president Kelly Kahl...
TV SERIES・3 DAYS AGO