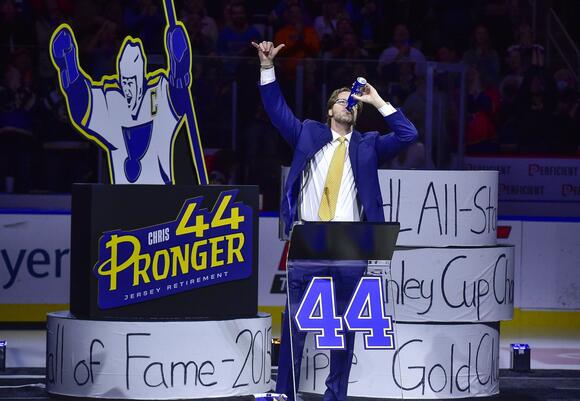 During his speech, he pulled out a Bud Light bottle, un-twisted the top and took a swig in appreciation of Blues fans. Then as he finished his speech, he chugged the rest in seconds.

You can hear more of his speech in the audio at the top of this page.

The Blues went on to defeat the Nashville Predators 5-3 that night, coming from behind after allowing two goals.

Maybe Pronger's pre-game speech had something to do with the victory:

Pronger was acquired from the Hartford Whalers for LW Brendan Shanahan in 1995 and played in 598 games with the club through 2004. He became the second player in NHL history to win the Hart and Norris trophies in the same season in 1999-2000 when the Blues also won the Presidents’ Trophy. But he never played in the Stanley Cup Final until after leaving St. Louis.

Audacy has announced a revamped weekday lineup for NewsRadio 1120 AM and 98.7 FM KMOX – the voice of St. Louis and the flagship station of the St. Louis Cardinals.
SAINT LOUIS, MO・19 HOURS AGO
KMOX News Radio

Albert Pujols, one of the greatest hitters of his generation, now has more total bases than Willie Mays. He is 18 home runs away from 700 in his career. Dan McLaughlin called the St. Louis Cardinals game on KMOX with John Rooney and Ricky Horton.
SAINT LOUIS, MO・2 DAYS AGO