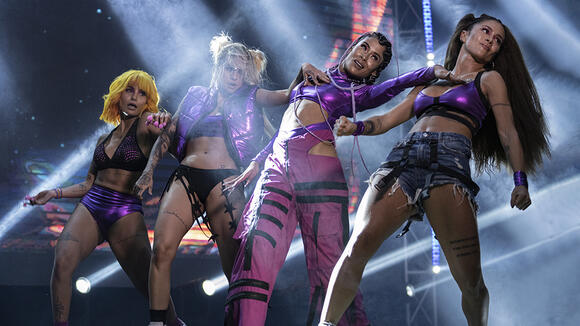 Netflix has confirmed the release date of March 2 for “Ritmo Salvaje,” a banner eight-episode dance drama on its 2022 slate of originals from Colombia headlining Colombian stars Greeicy Rendón and Paulina Dávila.

It shows. In narrative terms, “Ritmo Salvaje” is a classic dance drama, though moving to modern rhythms:

To reggaeton music and the voices of Dawer and Damper, we see actress-singer Rendón show her impressive dance moves as she  walks to work in a hair salon from the humble side of Bogotá. She then transitions to a studio setting, ending up leading one side of a dance battle.

“Two groups from opposite worlds walk their own paths until they come face to face in a dance battle where they discover that their dream to stand out and be successful in what makes them passionate is not only born in urban neighbourhoods but high society,” the synopsis runs.

The high style of the music video is something else, however, with settings, costume, and decor awash in vibrant, warm pop-out tropical colors, which will make many viewers inside and outside Colombia wanting more.

“Ritmo Salvaje” is fruit of an output deal between top Colombian broadcast network Caracol Television and Netflix, first signed in 2016 and renewed in 2019, which has given the streamer its recent international hit, “The Queen of Flow,” season 2,. It is produced by Caracol Television for Netflix from an original idea by Juliana Barrera.

Few Netflix 2022 Latin American series promise to be as eye-catching.

Click here to read the full article. “Westworld’s” Fares Fares is set to make his directorial debut with a Swedish film titled “A Day and a Half” for Netflix. Fares will also star in the feature alongside Alexej Manvelov (“Chernobyl”) and Alma Pöysti (“Tove”). It is scheduled to hit Netflix in 2023. Inspired by a true story, “A Day and a Half” tells the tale of Artan (played by Manvelov), a man who takes his ex-wife Louise (Pöysti) hostage on a perilous road trip through Sweden with the police in tow. Police officer Lukas (played by Fares) is also along for...
TV & VIDEOS・1 DAY AGO
Variety

Click here to read the full article. This year, Global Accessibility Awareness Day falls on May 19. And Netflix is using the occasion to announce major plans to expand the global translations of its audio descriptions and subtitles for customers who are blind, deaf or hard-of-hearing. The streamer will expand audio description (AD), subtitles for the deaf or hard-of-hearing (SDH) and dubbing in more than 10 additional languages throughout the year starting this month — so that more Netflix members with disabilities can experience shows and films made in another country in their local language. That’s not the norm in the...
BEHIND VIRAL VIDEOS・2 DAYS AGO
Variety

JoJo Siwa to Star in Hybrid Docuseries on Facebook Watch

Click here to read the full article. Gen Z superstar JoJo Siwa is getting her own show on Facebook, following the exuberant multihyphenate on “crazy-fun adventures” with her pals. Facebook Watch greenlit original hybrid docuseries-format series “JoJo Goes,” slated to premiere in the summer of 2022. In the show, Siwa will be joined by celebrity friends to partake in a range of activities she’s always wanted to experience — but hasn’t had the chance to, until now. “JoJo Goes” will premiere on Facebook Watch this summer, as well as on Siwa’s official Facebook page (where she has 1.1 million followers). The series...
TV & VIDEOS・3 DAYS AGO
Variety

Click here to read the full article. Never one to rehash the past, Madonna is taking a two-pronged approach to celebrating the 40th anniversary of her debut album — nodding to the past with two career-spanning remix collections, while remaining rooted in the present by remixing Sickick’s mega-viral reimagining of “Frozen.” For the third and final iteration, dubbed “Frozen on Fire,” Madonna added new lyrics to the song and invited the masked producer to contribute his own vocals. The result is a trap-tinged adventure that rounds out a trilogy of free-wheeling remixes that began with an Afrobeats overhaul, featuring Nigeria’s Fireboy...
MUSIC・1 DAY AGO

Click here to read the full article. Cannes is going Meta. The social giant formerly known as Facebook is taking the Croisette by storm and rolling out the red carpet for creators at the festival. Meta has unveiled its first creator villa, which will be powered by Instagram and host up to 300 content creators over two days at the iconic Palais Bulles. According to a blog post authored by Louise Holmes, director of creator partnerships for EMEA, the villa will offer “unique access to experiences and innovations.” Meta’s presence in Cannes follows similar events at U.S. festivals such as SXSW and Coachella. The...
INTERNET・2 DAYS AGO
Hello Magazine

Robin Roberts got emotional as she opened up about her relationship with partner Amber Laign, especially in the midst of a challenging health battle. The Good Morning America star made an appearance on The Ellen DeGeneres Show to promote her new book, Brighter By the Day. VIDEO: Robin Roberts enjoys...
CELEBRITIES・25 DAYS AGO
Popculture

Netflix has canceled another one of its major shows, with this one getting the ax after only two seasons. Variety reports that hit sci-fi drama Raising Dion has been dropped by the streamer, following its recent season debut. The news seems to have been revealed by series star Sammi Haney, who shared the news with fans on Instagram. "Sad to say that Raising Dion is CANCELED [sic] Thank you for all of the amazing support we got from all of our wonderful fans!" Haney wrote, in part. "Season 2 was a success, equal to Season 1, even if just looking at how many people watched all of it and wanted a season 3!"
TV SERIES・24 DAYS AGO
The Independent

Laughter erupted in courtroom after Johnny Depp said he doesn’t watch his own movies and couldn’t recall the question he was asked. “I don’t watch them. I feel better not watching them. What was the question again?” Mr Depp said to laughter from the room. Johnny Depp trial – latest updates“Order in the court, or I will have you removed,” Judge Azcarate said. “Understood? Thank you.”The defamation trial between Mr Depp and Amber Heard began on Monday 11 April in Fairfax, Virginia following Mr Depp’s lawsuit against his ex-wife in March 2019. Mr Depp is arguing that she defamed him...
CELEBRITIES・25 DAYS AGO

Click here to read the full article. It seems like everyone was rooting for Renée Zellweger and Ant Anstead to get together, including an unexpected duo: the Property Brothers. Drew and Jonathan Scott recently revealed that they were the ones that ended up getting Zellweger and Anstead to meet, and subsequently fall in love. And their hard work ended up paying off! Back on April 14, 2022, the Scott brothers sat down with ExtraTV to talk about everything from Drew’s upcoming fatherhood to Jonathan loving GF Zooey Deschanel’s Vanity Fair gown. While we loved the entire interview, we’re losing it over...
CELEBRITIES・27 DAYS AGO
OK! Magazine

Ryan Seacrest is weighing in on the ongoing court battle between the Kardashian-Jenner family and Blac Chyna.According to a new report from Radar, the TV producer made some bombshell claims in his deposition, which the famous family is trying to get blocked from the jury. As reported by the outlet, Seacrest — who is scheduled to take the stand in the trial — shockingly revealed in his deposition that he wanted Chyna's show with Rob Kardashian, Rob & Chyna, to move forward, despite the Kardashian-Jenner squad's claim that there was fear over Rob's safety as a result of the exes'...
CELEBRITIES・25 DAYS AGO
Hello Magazine

Princess Eugenie has taken to her Instagram Stories to make an exciting announcement related to The Anti-Slavery Collective, which she co-founded with her best friend Julia de Boinville back in 2017. Resharing a message from the charity organisation, the mother-of-one revealed she was posting "news from my charity". WATCH: Princess...
CELEBRITIES・25 DAYS AGO
The Hollywood Reporter

Depp said he discovered Disney would not recast him in "Pirates" days after Amber Heard's Washington Post op-ed article was published.
FAIRFAX, VA・25 DAYS AGO
TheStreet

Once again, Disney (DIS) - Get Walt Disney Company Report is finding itself embroiled in a political quagmire owing to its support of the LGBTQ community, after Florida Gov. Ron DeSantis punished Disney for denouncing his “Don’t Say Gay Bill,” by seeking to revoke Disney World’s designation as a special tax district (which as we pointed out, is ultimately a meaningless gesture).
FLORIDA STATE・24 DAYS AGO
Popculture

One of the stars of This Is Us is on the move to a new network in advance of the show's series finale. Deadline reported in March that Chris Sullivan, who plays Toby on the NBC series, will headline a comedy pilot for ABC. His new show is set to be titled The Son In Law.
TV SERIES・24 DAYS AGO
Variety

Click here to read the full article. Faith Hill will never forget one of her earliest auditions. She read for director Anthony Minghella for 2003’s “Cold Mountain” for the role that went to Natalie Portman. “I read, I believe, the rape scene and another one. It was intense,” Hill tells me on the new episode of the “Just for Variety” podcast. “I had been on a few readings, but nothing like that.” Not that she didn’t do her homework beforehand. “I worked my tail off to be prepared for that,” Hill said. “Because for me, personally, I thought I have got to prove...
CELEBRITIES・2 DAYS AGO
Variety

Gwyneth Paltrow is a doting mom to two teenage children, Apple and Moses, who she shares with ex-husband Chris Martin. The family are notoriously private, but over the weekend the award-winning actress gave a rare insight into their upcoming plans - and how they are changing things up this year for Mother's Day.
FAMILY RELATIONSHIPS・25 DAYS AGO
hotnewhiphop.com

50 Cent cast doubt on Megan Thee Stallion's recent comments about not having been in an “intimate relationship” with Tory Lanez, prior to the infamous shooting in July 2020 which left her with gunshot wounds. Megan's comment came during a recent interview with Gayle King, during which she...
CELEBRITIES・24 DAYS AGO