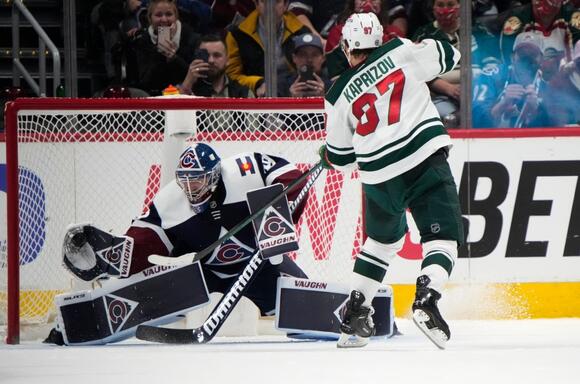 DENVER (AP) — A disputed goal, a questionable hit, and a thrilling finish — the Wild-Avalanche rivalry is still going strong after 19 years.

Colorado goaltender Pavel Francouz stopped 25 shots in relief of injured Darcy Kuemper and three more in the shootout, and the Avalanche beat Minnesota 4-3 on Monday for its 14th straight home win.

The teams forged a rivalry when Minnesota upset Colorado in the first round of the 2003 playoffs. Two more postseason upsets in the next nine years — one by each team — and several battles in the regular season kept it alive, and Monday a new chapter was added when Wild forward Jordan Greenway knocked Kuemper out of the game in the second period.

Kuemper was down on the ice for a few minutes but remained in the game until he was replaced by Francouz with 10:34 left in the second period.

“Our (defenseman’s) not riding him in there, so I see him coming across the front of the net and readjust his route to come into Kuemper,” Avalanche coach Jared Bednar said. “It looks like it’s intentional to me and he gets his head. I don’t know how it can only be a two-minute penalty. Our goalie’s out again. I’m sure the league will look at it.”

Kuemper was injured when Greenway ran into him in the crease and knocked him down. The play drew the ire of Kurtis MacDermid, who dropped the gloves with Greenway.

“I think he was maybe out of the crease a little bit. I didn’t even really try to intentionally give it to him,” Greenway said. “I just skated through and ended up clipping him.”

Rantanen’s shootout goal came after Francouz stopped the first two shots. Kaprizov had a chance to extend it but Francouz made a glove save to win it.

“I know him from the KHL, I know he can make some plays and I was trying to be patient,” Francouz said. “He got really close and I tried to put my glove as close as I could.”

MacKinnon gave Colorado a 3-2 lead at 16:28 of the third with a strange goal. His shot went into Kahkonen’s left pad just above the skate, and the goalie’s leg slid into the net. It was originally ruled no goal, but a review determined the puck crossed the line.

Wild coach Dean Evason said the officials told him the league overturned the ruling on the ice.

“So I’m really looking forward to seeing the NHL Network or them sending out that video to see what angle they had that shows the puck in the net because no angles that we have — overhead, everything,” Evason said. “That puck could be in his crotch, it could be anywhere. And sure, you can assume that it’s in the net, but that’s not the rule. That’s not what it’s there for, and I’m really looking forward to the league putting that out. That would be great.”

MacKinnon said he knew it was in but wasn’t sure it would be ruled a goal.

The Wild pulled Kahkonen with 2:57 left and Kaprizov tied it at 17:09 with his 16th goal of the season, sending it to overtime.

Fiala’s goal 33 seconds into the second period. It stayed 2-1 until the third period when Kaprizov scored at 6:46.

NOTES: Mats Zuccarello had two assists for the Wild. … Avalanche RW Valeri Nichushkin entered health and safety protocols before the game. Kiefer Sherwood was recalled from the AHL to replace Nichushkin in the lineup. … Minnesota has lost nine of its last 12 games in Denver.

Wild: At Chicago on Friday.

Avalanche: On the road against Anaheim on Wednesday.

(KDVR) -- The first game of the second round will take place on Tuesday in Colorado at Ball Arena at 7:30 P.M. During the regular-season series against the Blues, the Avalanche posted a 2-1-0 record.
DENVER, CO・7 DAYS AGO
KREX

An investigation is underway following alleged threats made against Colorado Avalanche center Nazem Kadri after the playoff game against the St. Louis Blues on Saturday night.
SAINT LOUIS, MO・1 DAY AGO
KREX

Bulldogs Close In On Postseason Aspirations

Palisade have completed many of their goals this season... Now it's on to their postseason aspirations.
PALISADE, CO・6 DAYS AGO
KREX

The Rockies lose in a pitching duel.

Grand Junction, CO – (KREX) The Rockies lose a tough one to the Mets, 2-0. Taijuan Walker was the star of the game. Pitching 7 innings, gave up 5 hits, and struck out 6. Austin Gomer pitched equally as well, throwing 7 innings, and giving up 7 hits and 2 earned runs. Edwin Diaz got […]
DENVER, CO・1 DAY AGO

Some tax relief is on the way for Coloradans across the state. Gov. Jared Polis signed bills on Monday that aim to decrease property tax assessment rates.
COLORADO STATE・7 DAYS AGO
KREX

(WREG) — A man has been charged with kidnapping and evading arrest after officers say the victim begged for help from a KFC employee.
MEMPHIS, TN・6 DAYS AGO
KREX

Multiple blunt force injuries identified as cause of death

A 49-year-old male involved in the May 14, 2022 incident at the Grand Junction Regional Airport suffered multiple blunt force injuries resulting in his death.
GRAND JUNCTION, CO・6 DAYS AGO
KREX

In an effort to be more transparent with COVID hospital data, Colorado's health department is breaking down COVID hospitalizations to distinguish who is in the hospital because of the virus, vs. who happens to be positive but is hospitalized for another reason.
COLORADO STATE・3 DAYS AGO

As Lake Mead continues to lose water more relics from the past are being exposed along the once underwater shoreline.
LAS VEGAS, NV・20 HOURS AGO
KREX

The body was found in about nine feet of water just west of the islands. No foul play has been suspected involving this incident.
DELTA, CO・1 DAY AGO
KREX

64% of employees are hiding something at work, study says

From a young age, most people are encouraged to "just be yourself." However, it's not that easy, especially in the workplace.
ECONOMY・1 DAY AGO

(The Hill) – Eric Clapton — one of the most prominent opponents of vaccination mandates — says he’s postponing performances after testing positive for COVID-19.
PUBLIC HEALTH・6 DAYS AGO
KREX

Gov. Jared Polis signed a bill Monday that will issue tax refunds to most Colorado taxpayers this summer instead of having residents wait until next year when they file their taxes.
COLORADO STATE・1 DAY AGO
KREX

(KDVR) - In a city as large as Denver, 911 dispatchers deal with thousands of calls every day. But any dispatcher will tell you there are certain calls that stick with them.
DENVER, CO・6 DAYS AGO

Biden approval falls to lowest of his presidency, poll finds

President Joe Biden’s approval rating dipped to the lowest point of his presidency in May, a new poll shows, with deepening pessimism emerging among members of his own Democratic Party.
PRESIDENTIAL ELECTION・4 DAYS AGO
KREX

(AP) — The revelation raised questions about whether his encounter with police and the mental health system was yet another missed opportunity to put a potential mass shooter under closer law enforcement scrutiny.
BUFFALO, NY・7 DAYS AGO