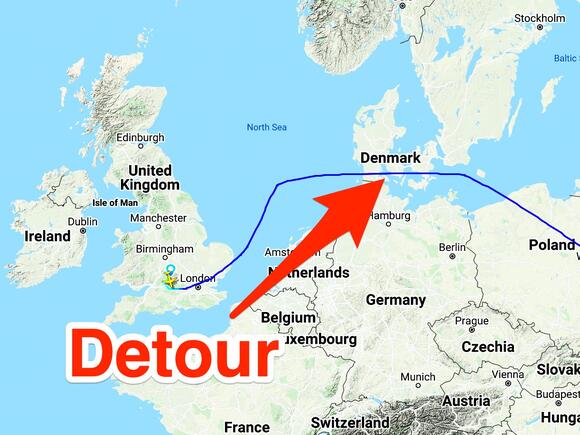 In recent weeks, Ukraine has called on the likes of the US , UK, and Germany to provide military aid to help counter the buildup of Russian troops at its border . Ukraine and the US have long warned of an imminent Russian invasion.

Ben Wallace, the UK defense minister, told Parliament on Monday that Britain was sending "light, anti-armor, defensive weapon systems" to Ukraine to use only in self-defense in case of a Russian invasion.

The weapons were transported on RAF C-17 planes that flew to Ukraine by an unusually long route: through Danish instead of German airspace, as can be seen below.

The choice of route is notable given that Germany declined to send arms to Ukraine in December.

Germany has also blocked Ukraine from receiving NATO shipments of rifles and anti-drone weaponry sourced from the US and Lithuania in recent months, the Ukrainian news outlet ZN reported .

The Daily Mail reported that Germany denied the C-17s permission to use its airspace.

But a spokesperson for the UK Ministry of Defence told Insider: "Germany has not denied access to its airspace as the UK did not submit a request. There has been no dispute between the UK and Germany on this issue."

And a spokesperson for the German defense ministry told Bild , "There had been no application from the British for the flights."

The C-17s were therefore "not prohibited" from using German airspace, the spokesperson said, Bild reported.

The UK also sent a small number of troops to Ukraine on Monday to help with "early-stage training for a short period of time," Wallace told Parliament. A number of British troops have been stationed in Ukraine since 2015.

But Wallace said in December that the UK would not send troops to Ukraine if Russia invaded.

President Joe Biden ruled out sending US troops to Ukraine in December, but warned Russia that it would face harsh sanctions should it invade Ukraine.

The US sent a consignment of military aid, including small arms and ammunition, to Ukraine in December, CNN reported . Four countermortar radars were scheduled to be sent from the US to Ukraine in 2022, CNN said.

Germany has increasingly shown itself to be an unreliable partner in defense and diplomatic issues concerning Russia and China.

Germany protecting the bad guys. Selling out freedom for economic gain. They will become unreliable ally in future and possible for as the did in 1939 with Russia against Poland .

seems like Germany and Russia are in agreement. last time this happened, well so, I'm not going to waste time explaining... I gotta go to work tomorrow that I'm certain of

Vladimir Putin's hand appears to tremble before he greets another man, which has sparked further concern over the Russian leader's health.
WORLD・25 DAYS AGO
The Independent

Vladimir Putin is so popular in Russia that he has the “political space” to withdraw his forces from Ukraine, said Boris Johnson.The prime minister said the Russian president still has “massive backing” from his own people despite international outrage over the invasion.“The Russian public overwhelming back Putin,” Mr Johnson told Talk TV. “Therefore he has the political margin for manoeuvre from within Russia … Putin has far more political space to back down, to withdraw.”The PM added: “There could come a point when he could say to the Russian people, ‘The military-technical operation that we launched in Ukraine has...
POLITICS・23 DAYS AGO
Business Insider

The Kremlin has refused to acknowledge its death toll in Ukraine, though a spokesperson admitted that Russia suffered "significant losses."
MILITARY・25 DAYS AGO
Newsweek

Maria Vorontsova allegedly took part in discussions on Telegram, according to an unconfirmed report by Dmitry Kolezev, editor-in-chief of the website Republic.
POLITICS・1 DAY AGO

The former adviser to Donald Trump said Putin probably needed glasses and ate and drank nothing at a dinner she attended, where the Russian president "barely gave her a glance."
POTUS・3 DAYS AGO
Business Insider

The Treasury Secretary suggested talks were underway on a Western-led effort to rebuild Ukraine over the long term once the Kremlin's invasion ends.
U.S. POLITICS・2 DAYS AGO
Business Insider

The former F-35 test pilot Billie Flynn told The Aviationist that moving to the "cosmic spaceship" that is the F-35 was too much to ask of MiG pilots.
AEROSPACE & DEFENSE・25 DAYS AGO
Business Insider

The FBI also seized financial records and fine art in the October 2021 raids on properties linked to billionaire Oleg Deripaska, per Bloomberg.
WASHINGTON, DC・24 DAYS AGO

Boris Johnson has threatened to unleash “terrors of the earth” on the Conservative MP who made misogynistic claims about Labour deputy leader Angela Rayner.An unnamed Tory MP told the Mail on Sunday that Ms Rayner crossed and uncrossed her legs on the Labour front bench during PMQs in an attempt to distract the prime minister.Mr Johnson described the comments made about Labour deputy leader Angela Rayner in a newspaper article as “the most appalling load of sexist, misogynist tripe”.In a King Lear reference, the PM threatened to unleash “the terrors of the earth” on the source behind the comments...
POLITICS・25 DAYS AGO
Newsweek

Sign up for the Fortune Features email list so you don’t miss our biggest features, exclusive interviews, and investigations. Two Russian oligarchs found dead alongside their families within 48 hours of each other are the latest high-profile executives to die in mysterious circumstances since the beginning of the year.
PUBLIC SAFETY・25 DAYS AGO
Newsweek

Russia's foreign minister, Sergei Lavrov, said "there can be no winners in a nuclear war."
POLITICS・24 DAYS AGO
Business Insider

Greene testified on Friday that she didn't recall whether she asked Trump to invoke military rule, despite telling Meadows to relay the idea to Trump.
ATLANTA, GA・25 DAYS AGO
Business Insider

Russia is sending a ragtag group of soldiers to fight in Ukraine because of 'significant resourcing problems,' UK intel says

Russia is relying on mercenaries and the forces of Chchen warlod Ramzan Kadyrov to cover gaps in its main army, UK officials said.
MILITARY・2 DAYS AGO
Business Insider

Ukrainian soldier Cpl. Andrii Shadrin said his own parents' media diet in Crimea leaves them convinced that he is fighting on behalf of Nazis.
POLITICS・1 DAY AGO
US News and World Report

WASHINGTON (Reuters) - The United States on Tuesday offered a reward of up to $10 million for information on six people it described as Russian military intelligence officers who had conducted cyber attacks affecting critical U.S. infrastructure. The six officers work in a cyber-focused unit of Russia's Main Intelligence Directorate...
PUBLIC SAFETY・24 DAYS AGO
Benzinga

As North Korea's COVID-19 infection rate moves past the million mark with a death toll of 56, its leader Kim Jong-un has deployed the country's "powerful forces to all pharmacies in Pyongyang City and began to supply medicines." What Happened: The isolated country, with no vaccination campaign and limited testing...
MILITARY・3 DAYS AGO
Business Insider

Intercepted audio reveals a Russian soldier trying to pull strings to get sent home from the war, Ukraine alleges

"Everyone is already tired of it all and everyone is on strike," a Russian soldier allegedly said to his parents, adding that things are "pointless."
MILITARY・1 DAY AGO