Will Abbott Laboratories Be a Trillion-Dollar Stock by 2035?

In the unlikely event that someone's never heard of it, Abbott Laboratories (NYSE: ABT) is one of the world's largest and longest-operating healthcare companies, weighing in at a market cap of $237.6 billion. With its gargantuan portfolio of products ranging from diagnostic tests to medical nutrition, medical devices, and pharmaceuticals, it has plenty of avenues to pursue for future growth.

But does the company have what it takes to grow by more than 320% over the next 12 years to reach a market cap of $1 trillion by 2035? In my view, it's a long shot, though I believe that such an expansion is possible, in theory. Let's do some quick calculations to see how. 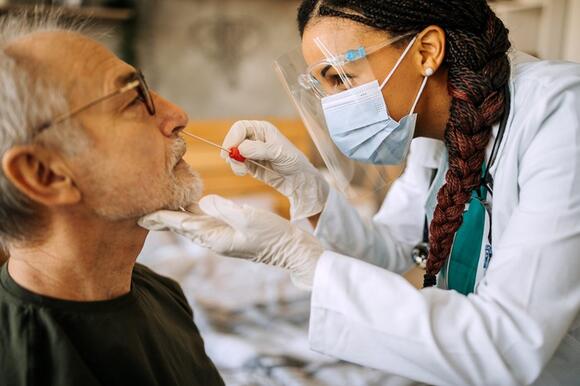 The biggest factor in Abbott's favor is its long history of plodding forward with its earnings despite varying economic and competitive environments. Global healthcare systems will need its products no matter what happens, and that isn't going to change anytime soon.

Abbott's trailing net income is $7.2 billion at the time of writing. Ten years ago, in 2011, its annual net income was $4.7 billion, meaning that its earnings grew by a compound annual growth rate (CAGR) of only 4.4% in each of the years between then and now. That's not too surprising, as massive healthcare companies tend to have a harder time growing over time than their smaller counterparts.

If we assume that the company will be able to sustain this slow growth rate through 2035, it'll end up with around $12.6 billion in net income. Right now, Abbott's trailing price-to-earnings (P/E) ratio stands at 33.34. Therefore, if we multiply the P/E multiple by the net income, we can calculate that Abbott Labs will have a market cap of $420.6 billion in 2035, which is nowhere close to our target of $1 trillion.

This estimate assumes that the stock's valuation won't change, however. Depending on the macroeconomic environment and the company's planned growth initiatives, it's entirely possible that the market will value Abbott Labs differently than it does today.

At the end of 2018, its P/E multiple was as high as 160.73, and in late 2016 it was around 58 -- that is quite a large range. If Abbott's P/E rises to 80 and stays there while its growth rate remains the same, its market cap will be just over $1 trillion in 2035. Though management would likely need to announce plans to expand into a new revenue vertical or something similar to make such a large impact on the business' valuation, the fact that its multiple has regularly been much higher than it is right now means that the door to reaching $1 trillion is still very much open.

The trouble with banking on Abbott's valuation to rise through the next decade and beyond is that its latest and greatest driver of new earnings, rapid coronavirus diagnostic tests, won't be as relevant moving forward as it has been since 2020.

In the third quarter of 2021, diagnostic test revenue grew by 48.2% on a reported basis, the vast majority of which was attributable to coronavirus tests. As the pandemic shifts toward endemicity and vaccine technology improves, demand for tests will likely fall off sharply. Aside from the prospect of actual shrinking earnings as that occurs, it'll mean that the company will have to push a significant number of new products to keep growing at the same steady rate as it has.

So, receding test revenue could potentially offset new growth initiatives that could drive Abbott's valuation higher. In a nutshell, investors shouldn't be banking on the company's market cap to hit $1 trillion before 2035, even if the stock will almost certainly be worth a lot more than it is now.

10 stocks we like better than Abbott Laboratories
When our award-winning analyst team has a stock tip, it can pay to listen. After all, the newsletter they have run for over a decade, Motley Fool Stock Advisor , has tripled the market.*

They just revealed what they believe are the ten best stocks for investors to buy right now... and Abbott Laboratories wasn't one of them! That's right -- they think these 10 stocks are even better buys.

These companies are set to ride secular growth trends.
STOCKS・2 DAYS AGO

The lights are flashing green for long-term growth opportunities for these two tech stocks.
STOCKS・15 HOURS AGO
The Motley Fool

Among the Dow Jones Industrial Average's 30 components are three that analysts believe could more than double over the next year.
STOCKS・1 DAY AGO

If you have $77,280 that you can afford to invest, these stocks can turn that into $400 in recurring monthly income.
STOCKS・16 HOURS AGO
The Motley Fool

The company was a laggard in the retail stock recovery race.
STOCKS・16 HOURS AGO
The Motley Fool

The technology sector is rife with bargains after the big pullback in prices.
STOCKS・16 HOURS AGO
The Motley Fool

MercadoLibre is a success story that shows inflation is not necessarily an obstacle to rising profits.
STOCKS・16 HOURS AGO
The Motley Fool

Hint: It's not Apple or Chevron.
STOCKS・19 HOURS AGO
The Motley Fool