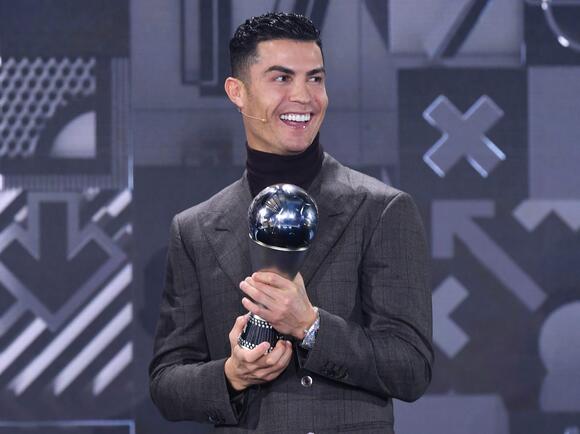 Cristiano Ronaldo was given a special award and was named in the FIFPRO Men's World11 at a controversial, somewhat shambolic FIFA Best Awards in Zurich on Monday night.

The Manchester United star was given the "FIFA Special Award" for becoming the top scorer in the history of men's international soccer.

In September, Ronaldo broke the record set by former Iran striker Ali Daei when he scored his 110th goal for Portugal.

FIFA unveiled the accolade for the 36-year-old during the ceremony with the forward describing it as the "pinnacle" of his "individual achievements."

Ronaldo was also named in the FIFPRO Men's World11, which was presented in a strange 3-3-4 formation, with four strikers, a team configuration that would almost certainly never be used in an elite soccer match.

Liverpool's Mohamed Salah missed out, despite the Egyptian making the shortlist for the Men's Best Player and Ronaldo being omitted.

David Alaba, Leonardo Bonucci, and Ruben Dias made up a three man defence, while Chelsea duo Jorginho and N'Golo Kante, and Manchester City's Kevin De Bruyne, were named in midfield.

There were similar controversies in the FIFPRO Women's World11 too.

FC Barcelona midfielder Alexia Putellas won the Best FIFA Women's Player of the Year, but was not included in line-up for the team of the year. In fact no Barcelona players featured, despite the club winning the Champions League and retaining its Primera Division title by dropping just three points all season.

27-year-old Putellas, who also won the Ballon d'Or in November and has been the standout player in the all-conquering Barca side, was delighted with her award, regardless of her omission from the team of the year.

"This belongs to everyone," Putellas said after receiving the award. "I hope we can continue with the same or even more motivations this year and we can be very successful again.

"This is the work of many years. 2021 was perfect. We only hope to finish this year the same way."

Vivianne Miedema, Marta, and Alex Morgan made up the front three.

PSG star Stephanie Labbe and Manchester City's Janine Beckie both hit out at the line-up.

"This is a prime example of why we need more investment, media coverage and visibility for women's soccer," tweeted Labbe.

"Popularity shouldn't win awards. Performances to win club and/or international championships should be rewarded but if you don't see it you can't award it."

Beckie tweeted: "How does the player who won the Ballon D'Or & FIFA Best not make this team??? No Canadian players, won the Olympics… No Barca players, won the champions league… If we're gonna say this is the BEST 11 from 2021… that doesn't make sense."

ARSENAL outcast Lucas Torreira gave a hilarious response after discovering Gabriel Martinelli had been handed the No11 shirt. Torreira was stripped of the number in an apparent signal that the on-loan Fiorentina man would be leaving the club for good this summer. Although the 26-year-old seemed to have other plans.
PREMIER LEAGUE・18 MINUTES AGO
Insider

Jessica Campbell made history as the first woman to join the coaching staff of a country participating in the men's world hockey championship.
SPORTS・1 HOUR AGO
Insider

Roman Abramovich has reportedly yet to provide the UK government with assurances that the proceeds from the sale of the club will go to charity.
PREMIER LEAGUE・2 DAYS AGO