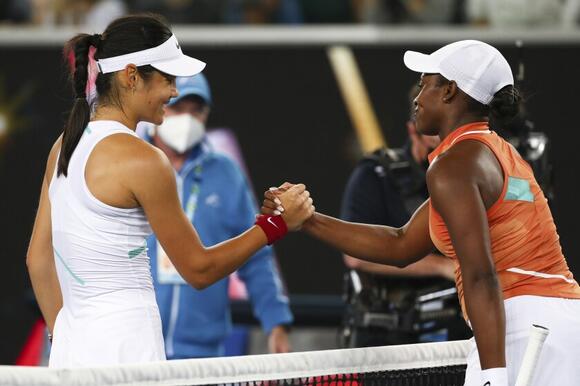 The Latest on Tuesday from the Australian Open at Melbourne Park (all times local):

The No. 17-seeded Raducanu won the first set in 17 minutes and seemed to be in complete control of her debut main draw match at Melbourne Park.

But Stephens, the 2017 U.S. Open winner, converted her fifth break point chance to open the second set in a 12-minute game that finished on a pair of double-faults from Raducanu, the 2021 U.S. Open winner.

Raducanu will play No. 98-ranked Danka Kovinic in the next round.

The match brought Day 2 to a close, finishing minutes after men’s fourth seed Stefanos Tsitsipas wrapped up the program on Rod Laver Arena with a 6-2, 6-4, 6-3 win over Mikael Ymer.

Tsitsipas, a runner-up at the French Open and a semifinalist in Australia last year, will play Sebastian Baez in the next round.

“I was training five hours a day, feeling extraordinary, and then it hit me and I was bedridden. Couldn’t really breathe well. Coughing,” the 26-year-old Australian said after a 6-4, 6-4, 6-3 victory over qualifier Liam Broady in the first round at Melbourne Park. “I was pretty bad. Like, for someone that you assume is in the peak of his physicality, I got hit pretty bad.”

This was Kyrgios’ first match of 2022. He advanced to a meeting against No. 2 seed Daniil Medvedev, the champion at the U.S. Open and runner-up at the Australian Open last year.

Kyrgios, a two-time Grand Slam quarterfinalist, pulled out of a tuneup tournament in Sydney on Jan. 10 after testing positive for COVID-19.

“Anyone that’s been through it, I hope honestly for the best. Obviously physically I don’t feel 100%, but I’m not going to use that as an excuse,” he said. “Like, everyone is dealing with that at the moment. The whole world is dealing with it. So I’m just going to take it day by day.”

Second-seeded Aryna Sabalenka rallied from a set and a break down to beat wild card Storm Sanders 5-7, 6-3, 6-2 in the first-round night match on Rod Laver Arena.

Sabalenka lost her opening matches at two tune-up tournaments and appeared to be headed the same way when she trailed No. 128-ranked Sanders 3-1 in the second set.

But she rebounded to win the next nine games and 11 of the last 13 to secure the win.

Five-time finalist Andy Murray needed a tough five-setter over a player he beat last week to register his first win in an Australian Open match since 2017.

Murray also fended off Basilashvili last week in a three-hour three setter on the way to the final in a Sydney tuneup event.

Tennis Australia issued a statement two days after nine-time champion Novak Djokovic lost a legal challenge against his visa cancellation to say that the entire saga would be subject to a review after the Australian Open.

The tournament started Monday. Three judges in the Federal Court on Sunday rejected Djokovic’s bid to have his visa reinstated and he was deported later that night, flying back to Serbia via Dubai.

Djokovic was approved by Tennis Australia and the state of Victoria for a medical exemption to the country’s strict COVID-19 vaccination rules based on the fact he’d tested positive for the coronavirus last month.

But border officials rejected the exemption and revoked his visa after Djokovic arrived in Australia late on Jan. 5, triggering an 11-day saga that involved two court hearings and the world’s top-ranked male tennis player spending five nights — in two stretches — in an immigration detention hotel.

“There are always lessons to learn, and we will review all aspects of our preparation and implementation to inform our planning – as we do every year,” the statement, issued Tuesday, said. “That process always starts once the Australian Open champions have lifted their trophies.”

The statement, which did not mention Djokovic by name, said organizers had been working with the federal and state governments for a year to stage the tournament during the pandemic. Without naming him, the statement said the board commended Tennis Australia chief executive Craig Tiley for his work and dedication.

Title favorite Daniil Medvedev has moved into the second round with a 6-1, 6-4, 7-6 (3) win over Henri Laaksonen, extending his Grand Slam winning streak to eight matches.

That includes his victory in the U.S. Open final last September, a result that denied top-ranked Novak Djokovic a calendar-year Grand Slam.

“I’m feeling great . . . hopefully I can show some good signs here throughout the two weeks,” No. 2-seeded Medvedev said. “I like pressure."

Medvedev is bidding to become the first Russian man to win the Australian Open title since Marat Safin, who beat Lleyton Hewitt in the final in 2005.

Eighth-seeded Casper Ruud has been forced to withdraw from his first-round match at the Australian Open because of an ankle injury.

The Norwegian player was in the same quarter of the draw as Stefanos Tsitsipas. Ruud twisted his ankle in practice two days before the tournament began.

“I hoped that I would be able to recover and be able to step on court today with the two days that I had, but rolling an ankle usually maybe needs some more time." Ruud said. “I tried everything I could to be ready, but unfortunately I’ve decided that I’m not ready.”

He was replaced in the draw by Roman Safiulin, a so-called lucky loser from qualifying who will now face Slovakian Alex Molcan in the opening round.

U.S. Open finalist Leylah Fernandez has lost in the first round of the Australian Open to local wild-card entry Maddison Inglis.

Fernandez had 30 unforced errors and only eight winners, and was broken three times. She saved two match points before Ingis, who is ranked 133rd, served out 6-4, 6-2 on 1573 Arena.

For Inglis, it was a first win in a Grand Slam main draw. She lost in the first round at last year’s Australian Open to then defending champion Sofia Kenin.

It was the third straight year that Fernandez, a 19-year-old Canadian who was runner-up to Emma Raducanu at last year’s U.S Open, has lost in the first round at Melbourne Park.

Garbiñe Muguruza has extended her first-round success record at Melbourne Park. The 2020 Australian Open finalist and winner of the 2016 French Open and 2017 Wimbledon tournaments has never lost a first-round match in her now 10th year of competition here.

“I am aware, I am aware," Muguzura said, laughing, when asked if she was aware of her perfect streak in first-round matches. ”I am so motivated here . . . you are so nervous when everybody can beat everyone, so very happy I managed to finish it off."

The 20-yaer-old Burel is one of eight women from France to start the main draw at Melbourne Park — the most since 2012.

No. 3 seed and 2020 finalist Garbiñe Muguruza opens play at Rod Laver Arena on Day 2 with a match against Clara Burel. Muguruza lost in the final two years ago.

Burel is one of eight women from France to start the main draw — the most since 2012.

Second-seeded Daniil Medvedev is set to begin his attempt to win a second consecutive Grand Slam singles title when he plays the last afternoon match on the main court. With Novak Djokovic not playing due to his canceled visa, the Russian has emerged as the men's title favorite.

The forecast is for cloudy skies with a high temperature of 21 Celsius (70 Fahrenheit).

#Us Open#Tuneup
The Associated Press