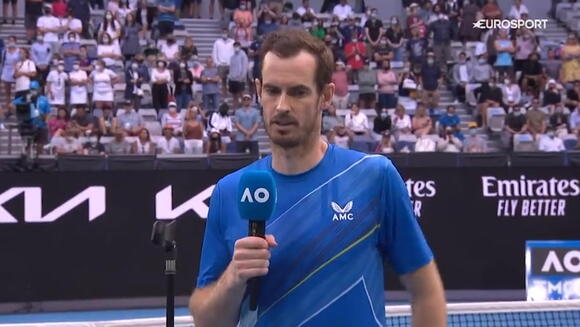 Follow all the reaction from the first-round matches on day two at the Australian Open .

In the women’s singles, Garbine Muguruza got off to a perfect start against Clara Burel, while British qualifier Harriet Dart could do little to stave off the brilliance of Iga Swiatek, falling 6-3 6-0 to the 2020 French Open champion. Simona Halep and Anett Kontaveit also cruised through in straight sets, although there was somewhat of a shock as Petra Kvitova was beaten by Sorana Cirstea. Leylah Fernandez, who faced Emma Raducanu in last year’s US Open final, also suffered an early exit at the hands of Australian qualifier Maddison Inglis. Raducanu’s match against Sloane Stephens was the last out on Margaret Court Arena and the 19-year-old battled to a thrilling win over three sets on her debut appearance at the Australian Open.

In the men’s draw, the new favourite in Novak Djokovic’s absence, Daniil Medvedev, swept aside Henri Laaksonen with relative ease. There were no problems for fellow Russian and No 5 seed Andrey Rublev either, who also coasted through in three. For Andy Murray , though, it was a day of typical exhaustion as produced another triumphant performance to defeat Nikoloz Basilashvili in five gruelling sets. Follow all the latest updates below:

Sports stars and clubs across the world continue to provide an insight into their lives on social media.Here, the PA news agency looks at some of the best examples from May 25.BasketballSteve Kerr demanded action following another shooting tragedy in America.Steve Kerr on today's tragic shooting in Uvalde, Texas. pic.twitter.com/lsJ8RzPcmC— Golden State Warriors (@warriors) May 24, 2022🙌🏽 watch this as much as you watch the game tonight…. https://t.co/EErBoMgCtQ— Stephen Curry (@StephenCurry30) May 25, 2022FootballAymeric Laporte issued a fitness update.Brb 😉👍🏻 pic.twitter.com/tpW8PjDCPV— Aymeric Laporte (@Laporte) May 25, 2022Mo Salah got the coffees in.Macchiato pls with 1 sugar 😂😂What a guy @MoSalah!...
TENNIS・1 HOUR AGO
The Independent

One teenager may have departed but two more are very much still in the hunt for glory at the French Open.US Open champion Emma Raducanu was sent packing by Aliaksandra Sasnovich but her opponent in the final at Flushing Meadows, fellow 19-year-old Leylah Fernandez, breezed through against Katerina Siniakova 6-3 6-2.Fernandez, the 17th seed from Canada, is being tipped to go deep into the tournament, although she said: “Honestly this is the first time I’m hearing about this.“But I’m just focusing on my own game. I have been trying to improve my game every single day, trying to get to...
TENNIS・1 HOUR AGO
The Independent

Follow live updates as the second round of the French Open gets underway at Roland Garros. Emma Raducanu’s journey is over, though, after a three-set defeat to Aliaksandra Sasnovich in the opening match at Court Suzanne-Lenglen. Raducanu edged the first set but was ultimately overwhelmed by an inspired Sasnovich, who hit an incredible 45 winners in wrapping up a 3-6, 6-1, 6-1 victory in a little over two hours. It kicked off a packed day of action at Roland Garros, espcially in the men’s draw with Rafael Nadal, Novak Djokovic and Carlos Alcaraz all in action today. Djokovic cruised...
TENNIS・1 HOUR AGO
Daily Mail

Emma Raducanu is 'overwhelmed' by the pressure of being a Grand Slam winner, says tennis legend John McEnroe after her French Open exit... who insists it's 'unbelievable' that she changed her coach after winning the US Open

Seven-time Grand Slam champion John McEnroe has claimed the pressure of being a major winner looks to have 'overwhelmed' British number one Emma Raducanu. The 19-year-old Briton was defeated in the second round of the French Open by world number 49 Aliaksandra Sasnovich, 28, of Belarus on Wednesday. This marks...
TENNIS・11 MINUTES AGO