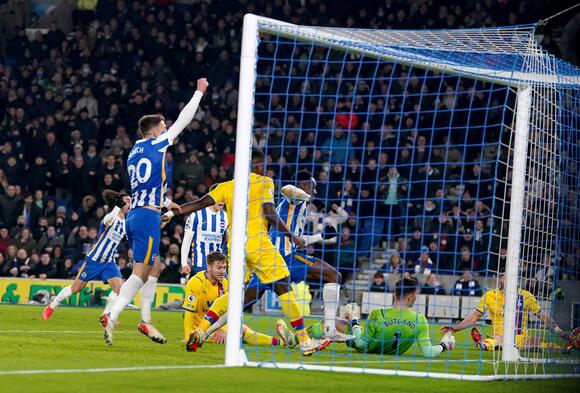 Chelsea look to get back on track at Brighton after coming unstuck against a dominant Man City to all but end their Premier League title hopes.

Brighton will be tough opposition and even snatched a point last month at Stamford Bridge thanks to Danny Welbeck .

Graham Potter’s side also fought back last time out to draw at home to Crystal Palace , showing their mental resilience.

This game is being played tonight due to the European champions’ commitment to play in the Club World Cup, shifting from the original 8 February date, a move that Thomas Tuchel is struggling to come to terms with .

The match will get underway at 8pm GMT at the Amex Stadium on Tuesday 18 January.

The match will be broadcast live on BT Sport 1 and BT Sport Ultimate, coverage starts at 7:30pm and subscribers can stream the game on the move on mobile devices.

This looks to be a close encounter which will test the character of the Blues coming off defeat, with Brighton likely to hold their own in possession and in good form themselves, we’ll opt for a 1-1 draw.

A return to perimeter fencing is not the answer to tackling pitch invasions and would represent “a failure of us all”, the UK’s football policing lead has said.Recent matches in the Premier League and the EFL have been marred by pitch invasions, and in some cases fans have clashed with players and other club staff after coming onto the field.Newcastle manager Eddie Howe has warned a failure to tackle the issue could end in tragedy, and the Professional Footballers’ Association has issued a fresh statement calling on the football and police authorities to take a tough stance on anyone invading...
PREMIER LEAGUE・1 HOUR AGO
The Independent

Liverpool manager Jurgen Klopp is not allowing himself to even contemplate the dream scenario of a dramatic end to the title race where former captain Steven Gerrard does his old club a favour at Manchester City.Pep Guardiola’s side have a one-point lead heading into the final match of the season so Liverpool, at home to Wolves, need to better their result if they are to snatch the championship away from their rivals.The fact Gerrard, for whom the Premier League was the only winner’s medal missing from his career at Anfield, will be in the opposition dugout at the Etihad provides...
PREMIER LEAGUE・2 HOURS AGO
The Independent

Brighton boss Graham Potter says Pascal Gross and Danny Welbeck are close to agreeing new deals at the Amex Stadium.The future of the Seagulls pair had been uncertain, with their current contracts set to expire in the summer.Potter, whose side finish the Premier League campaign at home to West Ham on Sunday, expects extensions to be announced imminently.“Pascal and Danny are really close, I think, to agreeing everything for next year,” he said.“I think it’s just a matter of time, a bit of formality, so that’s great.”Creative midfielder Gross, 30, has scored 16 Premier League goals and provided 26 assists...
PREMIER LEAGUE・50 MINUTES AGO
The Independent

Jurgen Klopp believes Mohamed Salah and Virgil van Dijk are on course to be ready for the Champions League final but will not gamble on his top scorer’s fitness on Sunday when Liverpool go for the Premier League title and the Egyptian could win the Golden Boot.Salah and Van Dijk both missed Tuesday’s 2-1 win over Southampton after coming off in the FA Cup final with groin and knee injuries respectively and they face a race against time to feature against Wolves at Anfield.Klopp said it would be his preference to field each this weekend to get them match sharpness...
PREMIER LEAGUE・4 HOURS AGO

Liverpool manager Jurgen Klopp has confirmed striker Divock Origi will leave at the end of the season.The Belgium international has not played enough matches to trigger an extension to his contract and has been heavily linked with a move to AC Milan.Despite his lack of playing time Origi has become something of a cult hero to the Kop after his goals against Everton, particularly his 96th-minute winner at Anfield in December 2018, and his double in the famous 4-0 Champions League semi-final comeback against Barcelona.Asked about what send-off the players who could leave in the summer – veteran midfielder James...
PREMIER LEAGUE・2 HOURS AGO
The Independent

Manchester City head into Sunday’s home clash with Aston Villa knowing there will be nothing Liverpool can do to deny them a second successive Premier League title if they win.The Reds, who entertain Wolves, will kick off a single point adrift of Pep Guardiola’s men and poised to take full advantage of any slip-up on what they hope will be a dramatic final day at the end of an intensely hard-fought race for glory.Here we look to other Premier League campaigns in which the fight for the silverware went right down to the wire.Blackburn Rovers-Manchester United, 1994-95🗓️ #OnThisDay: 14/05/95👑 Blackburn...
PREMIER LEAGUE・1 HOUR AGO
The Independent

Brendan Rodgers has told Leicester City to capitalise on a one-game-a-week “holiday” next season to push back up the Premier League.The Foxes could secure an eighth-place finish on Sunday by beating Southampton at home if Wolves also lose at Liverpool.Leicester have enjoyed two seasons of Europa League football off the back of two fifth-place Premier League finishes, but this term has proved tougher going for Rodger’s men, leaving the 49-year-old determined his side will make the most of next term’s European absence.Asked if Leicester will benefit from a lack of continental action next season, Rodgers said: “I don’t think there’s...
PREMIER LEAGUE・1 HOUR AGO
The Independent

Manchester City and Liverpool will battle to be crowned Premier League champions on Sunday, while either Burnley or Leeds will be relegated.Moreover, authorities will hope there is no continuation of the violent pitch invasions which are blighting English football.Here, the PA news agency picks out five of the main talking points going into the final day of the top-flight season.Title tussleA fascinating two-horse race is poised for a thrilling climax. Manchester City are in pole position ahead of hosting Aston Villa – a point better off than quadruple-chasing Liverpool, who welcome Wolves to Anfield. There are also plenty of intriguing...
PREMIER LEAGUE・2 HOURS AGO

Vivianne Miedema said it would “mean more” to win titles at Arsenal than elsewhere next season after signing a new contract with the club to put an end to speculation surrounding her future. Miedema, the top goalscorer in the history of the Women’s Super League, had been linked with a move to European champions Barcelona throughout the season. The Netherlands international was set to become a free agent in the summer but has agreed to remain with the Gunners on the condition of the club matching her ambition to win trophies and compete at the highest level of the women’s...
WORLD・4 HOURS AGO