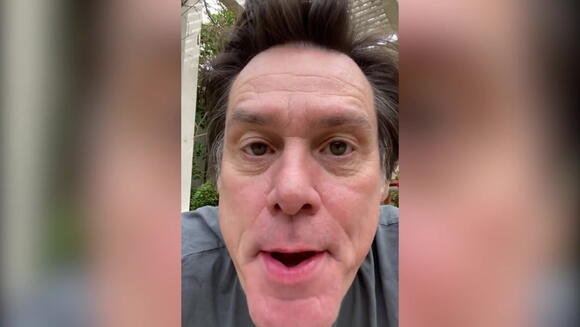 Jim Carrey has posted a video celebrating his 60th birthday in which he pretends to be an old, toothless man.

On Monday (17 January), the Canadian-American actor shared the clip on Twitter. In the footage, the Dumb and Dumber star can be seen making slurring his words and making comical faces, licking his lips repeatedly as if he were a toothless old man.

“I’m 60 and sexy!” Carrey says in the video. “And tonight I’m having creamed corn and strained peaches.”

Fans of the comedian responded to the video by showing appreciation for his talent, and wishing him a “happy birthday”.

“I congratulate you on your birthday as someone who has watched all your movies and was surprised at the limits of your acting every time,” wrote actor Yekta Kopan.

Another fan added: “We need to protect this man at all costs. He’s hilarious”

Carrey recently featured on The Weeknd’s new album Dawn FM , which was released on 7 January.

The comedian described the album as “deep and elegant”.

“It was deep and elegant and it danced me around the room. I’m thrilled to play a part in his symphony.”

“Thank you for being a part of this. It’s kismet. Full circle,” The Weeknd, real name Abel Tesfaye, responded.

Robin Roberts got emotional as she opened up about her relationship with partner Amber Laign, especially in the midst of a challenging health battle. The Good Morning America star made an appearance on The Ellen DeGeneres Show to promote her new book, Brighter By the Day. VIDEO: Robin Roberts enjoys...
CELEBRITIES・25 DAYS AGO
Outsider.com

Just a little over two months after Whoopi Goldberg was suspended from “The View” for insensitive remarks about the Holocaust, former “The Talk” co-host Sharon Osbourne is weighing in on the situation. Osbourne also takes aim at the double standards she believes are in the TV industry.
CELEBRITIES・24 DAYS AGO
The Independent

Laughter erupted in courtroom after Johnny Depp said he doesn’t watch his own movies and couldn’t recall the question he was asked. “I don’t watch them. I feel better not watching them. What was the question again?” Mr Depp said to laughter from the room. Johnny Depp trial – latest updates“Order in the court, or I will have you removed,” Judge Azcarate said. “Understood? Thank you.”The defamation trial between Mr Depp and Amber Heard began on Monday 11 April in Fairfax, Virginia following Mr Depp’s lawsuit against his ex-wife in March 2019. Mr Depp is arguing that she defamed him...
CELEBRITIES・25 DAYS AGO
ComicBook

After weeks of silence, Chris Rock has finally addressed his now-infamous incident with Will Smith at March's 94th Annual Academy Awards. During another sold-out show at Baltimore's Lyric Performing Arts Center on Friday, Rock directly referenced the slap, but only spent a second on it before moving on with his set.
BALTIMORE, MD・26 DAYS AGO

Netflix has canceled another one of its major shows, with this one getting the ax after only two seasons. Variety reports that hit sci-fi drama Raising Dion has been dropped by the streamer, following its recent season debut. The news seems to have been revealed by series star Sammi Haney, who shared the news with fans on Instagram. "Sad to say that Raising Dion is CANCELED [sic] Thank you for all of the amazing support we got from all of our wonderful fans!" Haney wrote, in part. "Season 2 was a success, equal to Season 1, even if just looking at how many people watched all of it and wanted a season 3!"
TV SERIES・24 DAYS AGO
SheKnows

Click here to read the full article. It seems like everyone was rooting for Renée Zellweger and Ant Anstead to get together, including an unexpected duo: the Property Brothers. Drew and Jonathan Scott recently revealed that they were the ones that ended up getting Zellweger and Anstead to meet, and subsequently fall in love. And their hard work ended up paying off! Back on April 14, 2022, the Scott brothers sat down with ExtraTV to talk about everything from Drew’s upcoming fatherhood to Jonathan loving GF Zooey Deschanel’s Vanity Fair gown. While we loved the entire interview, we’re losing it over...
CELEBRITIES・26 DAYS AGO
Hello Magazine

Kate Hudson has realized one of her dreams and has taken to Instagram to share the incredible news with her 15 million followers. Sharing two pictures of her looking casual in a pair of baggy dip-dyed trousers and a white tank top, and singing into a microphone, the actress announced a surprising career change.
CELEBRITIES・24 DAYS AGO
The Independent

Mark Hamill has revealed he lost thousands of followers on Twitter in the space of a few hours yesterday (25 April).While the exact reason for the exodus has not been confirmed, his tweet came shortly after it was announced that Elon Musk is set to purchase the social media platform in a deal worth $44bn.Since the news broke, many users of the site (including Jameela Jamil) have announced their intention to delete their accounts, owing to Musk’s reputation as a politically controversial figure. It is believed this could be the reason for Hamill’s loss in followers.“Weird. I just lost...
CELEBRITIES・24 DAYS AGO

Paulina Gretzky walked down the aisle in Vera Wang!. The bride shimmered during her wedding with pro golfer Dustin Johnson on Saturday at Tennessee's Blackberry Farm. Gretzky showed off the stunning look on Instagram Monday in a photo of the newlyweds kissing. "4/23/22♥," she simply captioned the post. For...
BEAUTY & FASHION・24 DAYS AGO
hotnewhiphop.com

50 Cent cast doubt on Megan Thee Stallion's recent comments about not having been in an “intimate relationship” with Tory Lanez, prior to the infamous shooting in July 2020 which left her with gunshot wounds. Megan's comment came during a recent interview with Gayle King, during which she...
CELEBRITIES・24 DAYS AGO
hotnewhiphop.com

Kim Kardashian's ex-husband, Damon Thomas, continues to "wish her the best," despite any false narratives about their past relationship. The 51-year-old sat down with DJ Vlad, looking back at his marriage with now-billionaire businesswoman Kim Kardashian in the early 2000s. He believes he's played a "part in their journey," however, he doesn't want to be known as "Kim Kardashian's husband" and wants to "get in control of [his] narrative," as many people fail to recognize he has won Grammys and even made it to the Oscars.
RELATIONSHIPS・24 DAYS AGO
The Independent

Eva Green has voiced her support for Johnny Depp amid the ongoing defamation trial against his ex-wife, Amber Heard.The actor, who appeared alongside Depp in 2012’s Dark Shadows, shared an image to Instagram of the two of them together on the red carpet.“I have no doubt Johnny will emerge with his good name and wonderful heart revealed to the world, and life will be better than it ever was for him and his family ,” she wrote in the caption.Other stars who have expressed their support for Depp include his Before Night Falls co-star Javier Bardem, and his Edward...
CELEBRITIES・21 HOURS AGO

It seems Coi Leray is getting fed up with the drama. She and her father, Benzino, have not seen eye to eye for quite some time, and despite numerous attempts to mend their relationship, they keep ending up back at square one. Yesterday, 50 Cent, whose been feuding with Benzino...
CELEBRITIES・26 DAYS AGO
Outsider.com

Geroge Wendt, who played Norm on the classic TV show Cheers, decided to be like Jack when he was in public. We mean Jack Nicholson here. The famed movie actor seemingly did not mind being noticed when out among the non-Hollywood crowd. Nicholson’s attitude about this did ring a bell for Wendt during his show’s incredible run on NBC and in reruns today.
CELEBRITIES・24 DAYS AGO
PopCrush

90 Day Fiancé: Before the 90 Days star Johnny Chao is showing off a new look on social media. The reality TV star rocked a fresh-faced look on the show. However, Chao debuted some new facial hair in his most recent post on Instagram. More specifically, he grew a beard and mustache.
TV & VIDEOS・24 DAYS AGO
Hello Magazine

Gwyneth Paltrow is a doting mom to two teenage children, Apple and Moses, who she shares with ex-husband Chris Martin. The family are notoriously private, but over the weekend the award-winning actress gave a rare insight into their upcoming plans - and how they are changing things up this year for Mother's Day.
FAMILY RELATIONSHIPS・24 DAYS AGO
Insider

"The sisters are clearly concerned for our brother's safety and the credibility of the brand," Khloe Kardashian wrote in a 2016 email.
LOS ANGELES, CA・25 DAYS AGO
The Independent

Viola Davis has said that a director she’d known for years once called her by his maid’s name.The First Lady star was speaking about Black representation in Hollywood during a panel at Cannes film festival when she recalled the incident.The 56-year-old used it as an example of the micro-agressions Black actors experience “all the time” in the film industry.“I had a director who did that to me,” she said, per Variety. He said, ‘Louise!’ I knew him for 10 years and he called me Louise and I find out that it’s because his maid’s name is Louise.”She continued: “I...
CELEBRITIES・1 DAY AGO
Newsweek

While Pratt has never publicly expressed his views on sexuality, his links to a church that has been accused of supporting conversion therapy and being anti-LGBTQ have made him a target for online criticism.
MOVIES・25 DAYS AGO
The Independent

Pete Davidson is expected to announce he is leaving Saturday Night Live, according to a Variety report that cites “a person familiar with the matter”.The 28-year-old comedian was one of the youngest performers ever to be featured in SNL’s five decade history when he joined the cast in 2014.More recently, Davidson has become a tabloid mainstay as the boyfriend of Kim Kardashian, who he started dating after she hosted the sketch comedy series in October 2021.NBC, the network that broadcasts Saturday Night Live, has yet to comment on the report.This Saturday night’s episode (21 May), which will be hosted...
TV & VIDEOS・7 HOURS AGO