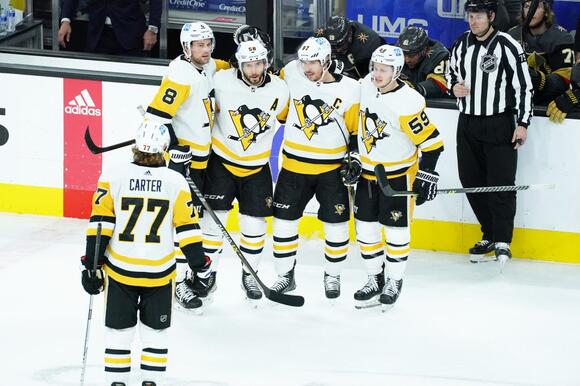 After the first 20 minutes, it seemed as if the Vegas Golden Knights were going to coast to victory in their matchup against the Pittsburgh Penguins on Monday night. They held a 3-0 lead, their last goal coming courtesy of Nic Roy on the power play with just 30 seconds left in the opening period. However, that lead was chipped away at and the Penguins managed to come away with a win .

It was a tough turn of events for the Golden Knights who have now lost three straight games. The utter lack of defense in the second and third periods was their fatal flaw as they allowed the Penguins to feel much too comfortable while attacking. The Penguins took advantage of this and managed to record 29 shots over the last two periods on their way to a 5-3 victory .

Let’s take a look at our hero, zero, and nero (unsung hero) for Monday night’s game.

The Penguins showed off their balanced attack in this game as they got goals from three different forward lines at 5-on-5. That balance throughout their lineups gave the Golden Knights fits as each Penguins’ trio presented their own set of problems. Neither Sidney Crosby nor Evgeni Malkin scored on a goalie Monday night(Crosby had an empty-netter) yet the Penguins still managed five goals across the last two periods.

Pittsburgh is known as an organization that can turn role players into point producers — look no further than Evan Rodrigues this season — and their forward depth should scare the rest of the league. When they are clicking like they were tonight, watch out!

Whatever the Golden Knights did during the first intermission, it wasn’t good. They went from holding a three-goal lead to being outscored 5-0 over the next 40 minutes. Whatever happened in that dressing room is something that the Golden Knights will want to forget about quickly.

They had a few days off before this game due to a postponed road trip and that may have impacted the Golden Knights. This is their fifth loss in the last six games, a troubling trend to say the least. The only reason why they are still at the top of the Pacific Divison has been the struggles of the teams chasing them, but more losses could spell major trouble for Vegas. 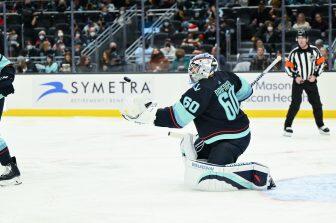 The Penguins have a knack for getting the most out of their supporting cast and defenceman Brian Dumoulin was one player who stepped up Monday night. The 30-year-old had an excellent game and did a great job of helping the Penguins control play at 5-on-5 while he was on the ice, all for just $800,000 against the cap.

With Dumoulin on the ice at 5-on-5, the Penguins had a 62.50 Corsi % and outshot the Golden Knights 14-5. All of this strong play resulted in two goals compared to only one against during this time. What made it even more impressive was that the Golden Knights forward trio he saw the most was the vaunted “Misfits Line” that has terrorized opponents for years.

What’s up next: Montreal Canadiens on Thursday, January 20th

The Vegas Golden Knights have a few days off before their next game on Thursday against the Montreal Canadiens. This will be a rematch of the NHL semi-finals last year when the Canadiens defeated the Golden Knights to advance to the Stanley Cup Finals. The two teams have already met once this year with the Golden Knights winning 5-2.

The Canadiens have had a tough season and currently are among the worst teams in the league. They lost to the Arizona Coyotes in a battle of two struggling franchises on Monday and have only won one of their last ten games. This shouldn’t be too difficult for the Golden Knights.

Tuesday here at Bark Bets went well on the ice and poor on the hardwood. The Rangers came through at home while goals continued to funnel through in the Battle of Alberta. Dallas finally woke up and took a game against Golden State, extending the Western Conference Finals at least another game.
NHL・17 MINUTES AGO
Sportsnaut

The Pittsburgh Pirates and visiting Colorado Rockies, who sew up a three-game series with a deciding game on Wednesday, are
DENVER, CO・6 HOURS AGO
Sportsnaut