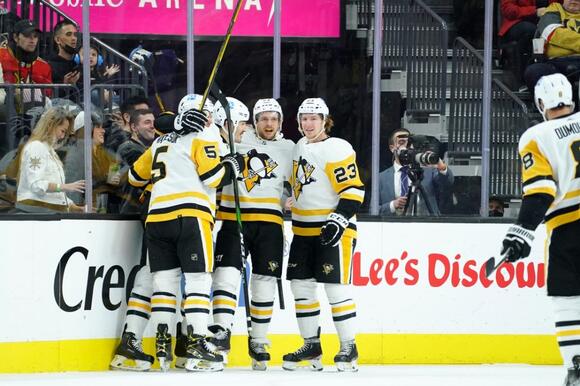 Jason Zucker scored two goals and Jake Guentzel recorded his 20th of the season as the Pittsburgh Penguins produced five unanswered goals to rally from a three-goal, first-period deficit to defeat the Vegas Golden Knights 5-3 on Monday night in Las Vegas.

Teddy Blueger and Sidney Crosby also scored goals and Kasperi Kapanen and Jeff Carter each added a pair of assists for Pittsburgh, which won for the 13th time in 15 games. Tristan Jarry made 23 saves for the victory.

Vegas, playing for the first time in six days, didn’t show any rust while jumping out to a 3-0 first-period lead, the first time this season the Penguins allowed three goals in an opening period.

Stephenson made it 1-0 at the 3:43 mark with his 11th goal of the season, finishing a rush up the left wing and then snapping a wrist shot through Jarry’s pads.

Dadonov followed with his 10th goal of the season, redirecting Mark Stone’s one-timer from the high slot at 12:12. Roy increased the lead to 3-0 just before the end of the period with a power-play goal, shoveling in a rebound of a Pietrangelo shot that landed in front of the crease.

Pittsburgh outshot Vegas 18-6 in the middle period and scored twice in a 49-second span to close to within 3-2. Zucker got the first on the power play, his first goal in 13 games, when he jammed in a rebound of a Carter shot at 6:56.

Blueger followed with his eighth goal of the season when he backhanded in a rebound of a Brian Boyle shot that bounced off Lehner’s glove.

The Penguins then took a 4-3 lead early in the third period with two goals in the span of 1:44.

Zucker tied it at the 28-second mark when he deflected Kapanen’s wrist shot from the top of the left circle in off the far post.

Guentzel then gave Pittsburgh its first lead with a wraparound rebound goal around the right post that deflected in off Lehner’s skate. The tally was Guentzel’s 17th goal in his past 20 games, and it gave him his fifth consecutive 20-goal season.

Crosby sealed the win with an empty-net goal with 1:08 remaining.

The NHL season officially started back on October 12. In this article, we track all the NHL games today as
NHL・14 HOURS AGO
Sportsnaut

Avs out to cure second-round woes vs. Blues

The Colorado Avalanche have breezed through the first round of the Stanley Cup playoffs four straight years, but the second
DENVER, CO・4 HOURS AGO

Nothing gets the people going quite like the Stanley Cup Playoffs. Find out how to live stream every NHL Playoff game here.
NHL・10 HOURS AGO
Sportsnaut

The Miami Heat on Monday listed guard Kyle Lowry as out for Tuesday’s Game 1 of the Eastern Conference finals
BOSTON, MA・2 HOURS AGO

Having played in just five games this postseason due to a nagging hamstring injury, Kyle Lowry was questionable heading into
MIAMI, FL・1 HOUR AGO
Sportsnaut