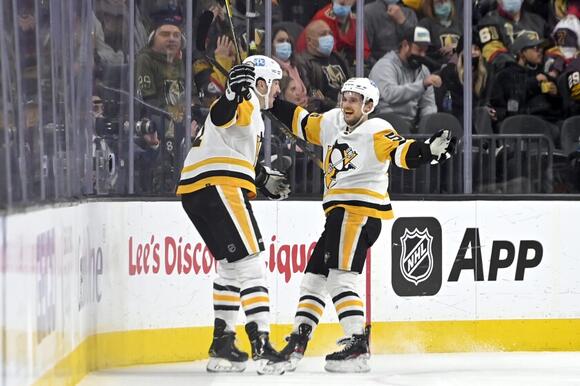 Jason Zucker scored twice and the Pittsburgh Penguins rallied from an early three-goal deficit to defeat the Vegas Golden Knights 5-3 on Monday night.

It was a perfect birthday homecoming for Zucker, who grew up in Las Vegas until he was 15 and turned 30 on Sunday.

Zucker started the Penguins’ comeback with their first goal in the second period, then netted the equalizer early in the third.

“We’re back in Vegas, so not a better time for him to have a great game,” said forward Kasperi Kapanen, who assisted on both of Zucker’s goals.

Pittsburgh scored five unanswered to improve to 13-2-0 since Dec. 4, including a 4-2-0 mark on its six-game trip — the team’s longest of the season.

“Down 3-0 at the end of a long road trip, it would have been easy to start feeling sorry for ourselves and pack it in,” defenseman Mike Matheson said. “We did the complete opposite.”

Chandler Stephenson, Evgenii Dadonov and Nic Roy scored for Vegas, which was outshot for the first time in 24 games. Robin Lehner made 32 saves but dropped to 2-4-3 in his career against the Penguins.

Pittsburgh allowed three goals in the first period for the first time this season. But after the Golden Knights’ third, they went without a shot for 12 1/2 minutes while letting the Penguins climb back into the game.

First, it was Zucker in the middle of a scrum in front of the crease, jamming the puck past Lehner on a power play. Just 29 seconds later, Blueger backhanded a rebound into a wide-open net, cutting Vegas’ lead to 3-2 midway through the second period.

The Penguins struck 28 seconds into the third with Zucker’s second of the game, and 1:44 later they took a 4-3 lead on Guentzel’s goal, deflating the crowd of 18,213.

“The character in the room showed tonight,” Pittsburgh forward Jeff Carter said. “We know we haven’t played our best hockey throughout this trip and I think we wanted to come into tonight and have a really solid 60 minutes. We’re gonna call it a really solid 40 minutes now. Guys dug deep.

“That’s a heck of a hockey team over there. We had to work and earn everything that we got tonight and I think up and down throughout the lineup we got contributions from everybody.”

Vegas, which had five days off due to games in Edmonton and Calgary being postponed, dropped to 2-3-2 since Dec. 31, with all seven games coming at home.

“We got outworked in that second period and we couldn’t find it again the rest of the night,” captain Mark Stone said. “You don’t want to lose at home. We pride ourselves on being a good home team. It’s been a tough stretch for us against good teams, but you’ve got to find a way to get points. Leading 3-0 after the first period, you can’t walk away from the game with nothing. We’ve got a little soul searching to do.”

Stephenson opened the scoring on Vegas’ first shot, as he raced down the left side and fired the puck between Jarry’s pads 3:43 into the game.

Vegas made it 2-0 when Stone fired a shot from the slot and Dadonov was there for the redirect past Jarry.

Roy got his eighth of the season when he gathered a loose puck off Alex Pietrangelo’s shot and buried it for a power-play goal with 30 seconds left in the first.

“That’s a very good team over there, a very resilient team with veteran, great players,” Vegas coach Peter DeBoer said. “It comes down to little details at key moments in the game. They were better than us in some of those.”