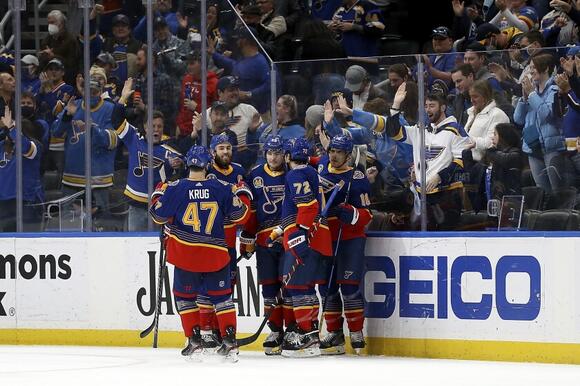 Brayden Schenn and Ivan Barbashev each had two goals and two assists as the St. Louis Blues came from behind to beat the Nashville Predators 5-3 on Monday night.

Ryan O’Reilly added a goal and two assists in the first meeting between the teams since they played back-to-back games in February 2020. St. Louis' victory left the clubs tied for second place in the Central Division with 51 points apiece.

“I thought it was a great effort by our team," Blues coach Criag Berube said. “That's a very good team over there. They play hard. You've got to really compete against them.”

Ville Husso made 32 saves for the Blues. He has won his past eight home decisions since losing to Vegas on April 5, 2021.

Yakov Trenin, Filip Forsberg and Ryan Johansen scored for Nashville, and Juuse Saros made 24 saves. Saros was pulled for an extra skater with 2:16 remaining.

“We had a breakout decision that cost us the first one, then they scored the second one," Predators coach John Hynes said. “That's the area of the game that cost us, was just our rush details and understanding when we have support to be aggressive with our defensemen and when we're not, so that's something we have to clear up.”

Schenn gave St. Louis its first lead when he scored 59 seconds into the second period to break a 2-all tie. The Blues went on to their 14th comeback win this season.

“It's just been the mentality of this culture and organization for a while,” Schenn said. “We know we can score goals. It's usually when we defend better and play hard in our own end, that's when we score even more. It's just kind of a never-quit mentality.”

“I don't really care about it right now,” Barbashev said. “It's definitely nice, but what's most important is the team wins right now."

Johansen scored his 11th of the season on a one-timer from Matt Duchene 4:05 into the game to give the Predators a 1-0 lead.

Forsberg skated in and pushed the puck past Husso from point-blank range with 4:10 remaining in the first period for his team-leading 19th goal.

Barbashev answered 19 seconds later by deflecting a centering feed from Schenn to trim the deficit to 2-1.

O’Reilly tied it 2-all with his ninth goal and fourth in his last four games on a power play with 2:13 left in the first.

“We came out ready to play and took it to them pretty good in the first,” Forsberg said. “I think we were battling hard throughout the whole game. There's just some of the execution that kind of got us.”

Before the game, the Blues retired Hall of Fame defenseman Chris Pronger’s No. 44 sweater. Pronger was acquired from the Hartford Whalers for LW Brendan Shanahan in 1995 and played in 598 games with the club through 2004. He became the second player in NHL history to win the Hart and Norris trophies in the same season in 1999-2000 when the Blues also won the Presidents’ Trophy. But he never played in the Stanley Cup Final until after leaving St. Louis.

“We had a number of good teams when I was here,” Pronger said. “We just weren’t able to get over the hump, and playing against a couple dynasties in Detroit, Dallas and Colorado.”

Pronger worked as an assistant general manager for the Florida Panthers before leaving hockey to start a travel business with his wife.

Blues forwards David Perron, Schenn and Vladimir Tarasenko along with defenseman Colton Parayko all returned to the lineup after being on the COVID-19 list, and Forsberg also returned for Nashville. Forward Pavel Buchnevich remains in protocols for the Blues and defenseman Mattias Elkholm remains on the COVID-19 list for the Predators.

Predators: Host the Vancouver Canucks on Tuesday night to open a three-game homestand.

Blues: At the Seattle Kraken on Friday night to open a three-game road trip.