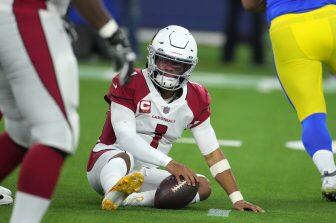 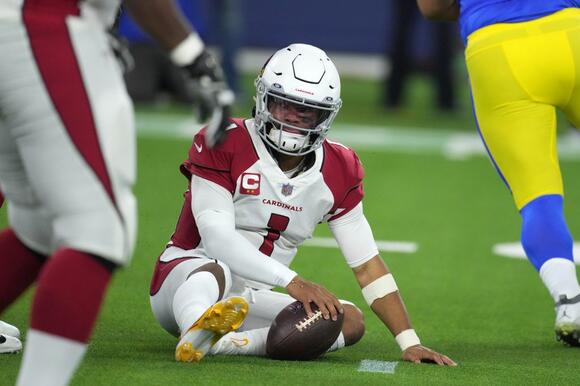 Following yet another late-season meltdown, Kyler Murray and the Arizona Cardinals are headed home for the winter.

Losers of four out of five heading into Monday night’s NFC Wild Card Playoff Game against the Los Angeles Rams, the Cardinals were absolutely embarrassed on the road.

Arizona found itself down 21-0 at the halftime by virtue of an ugly Murray pick-six in the second quarter . It did not get any better from there with the Rams opening up the third quarter with a 75-yard touchdown-scoring drive en route to winning by the score of 34-11.

As much as we want to talk about Kliff Kingsbury’s performance as the Arizona Cardinals head coach, Murray has not done himself any favors. There’s now a legit question whether he can be seen as the Cards’ franchise quarterback moving forward.

Related: Where does Kyler Murray rank among NFL Playoff quarterbacks?

It’s actually pretty interesting to look at. Murray was getting some early-season NFL MVP hype after putting up nine total touchdowns in his first two games.

All said, Arizona started out 7-0 while averaging 35.1 points per game . It’s been completely downhill since with Murray tallying nine total touchdowns compared to seven interceptions in the Cardinals’ final eight games, Monday’s playoff loss included. In fact, Murray was much better as a sophomore in 2020 than he was this past season.

The one good thing here is a lack of giveaways from Murray prior to Monday’s two-interception performance. However, he was not anywhere near as electric in 2021 as we saw back in 2020. The loss of DeAndre Hopkins to a season-ending injury also impacted Murray big time.

Wrapping up his third season in the NFL, Murray will be eligible to sign a contract extension once March comes calling. On the surface, the belief is that Arizona should wrap up an extension rather soon. That’s especially true given how the quarterback market has played out over the years.

The question here is value and what Murray might demand. He’s obviously seen as a step below recently-extended quarterbacks such as Patrick Mahomes, Josh Allen and Dak Prescott. That’s not even in question right now.

It’s also highly unlikely that the Cardinals will offer up the $39 million Deshaun Watson is making annually on his deal with the Houston Texans.

So, what is the middle ground here? It’s complicated.

Perhaps, the $33.5 million Aaron Rodgers and Jared Goff are earning annually with their teams could make sense. Kirk Cousins at $33 million with the Minnesota Vikings is also an option.

However, it’s all about how general manager Steve Keim views Murray moving forward. There’s been a major disconnect between the front office and head coach Kliff Kingsbury when it comes to roster building. That could lead to Kingsbury being a surprise fire. If so, Murray’s future with the Cardinals becomes less etched in stone.

What we do know is that these Cardinals are a second-tier team in the NFC West behind two teams in the Los Angeles Rams and San Francisco 49ers who are playing in the NFL Divisional Playoffs.

Some of the blame should be placed on Kyler Murray.

Our MLB Games Today schedule is back for the 2022 MLB season. Major League Baseball ended its lockout, officially clearing
NFL・13 HOURS AGO
Sportsnaut

The upcoming Denver Broncos sale is headed towards a crucial point of the bidding process with the remaining five competitors
DENVER, CO・1 DAY AGO

Cardinals lean on Dakota Hudson to go deep vs. Brewers

Kansas City Chiefs superstar tight end Travis Kelce knows he is not paid on a level equal to his production,
KANSAS CITY, MO・9 HOURS AGO

Colin Kaepernick worked out for the Las Vegas Raiders this week, a potential first step towards making an NFL comeback.
ANN ARBOR, MI・12 HOURS AGO
Sportsnaut

Who are the highest paid NFL players? As the salary cap climbs, the top NFL salaries soar every year with
NFL・3 HOURS AGO
Sportsnaut

Josh Hader returned from a family medical emergency to earn his 16th save in 16 tries as the visiting Milwaukee
MILWAUKEE, WI・21 HOURS AGO
Sportsnaut

The Indianapolis Colts had no issues committing $10 million per season to All-Pro cornerback Stephon Gilmore this offseason, but now
INDIANAPOLIS, IN・3 HOURS AGO