Gunna Sneaks Past the Weeknd in a Photo Finish to Land at No. 1 on Album Chart 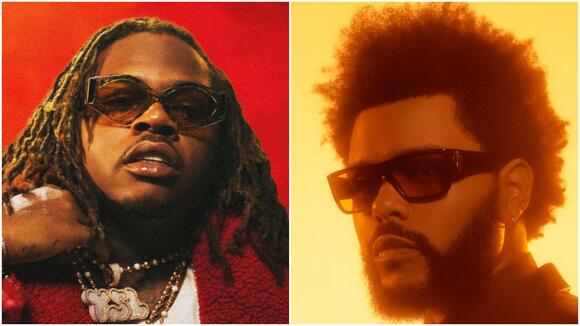 Things took an unpredictable turn at the top of the Billboard charts this week as Gunna ’s new album unexpectedly slipped past the Weeknd ’s, albeit in a photo finish that had the rapper pull ahead of the superstar competition by the tiniest of margins.

The Weeknd’s “Dawn FM” debuted with 148,000 album-equivalent units, almost but not quite a match for the 150,300 units registered by Gunna’s “DS4Ever,” Billboard revealed late Monday.

Although the Weeknd is the bigger mainstream name, these two albums actually came into the race evenly matched in many ways. Both  were released Jan. 7 — in what is, ironically, usually a fallow period for new releases — with less than a week of advance notice. Given their near-“surprise” status, neither had time to get any physical product into the general retail marketplace for any competitive advantage there. Both the Weeknd and Gunna had their previous albums debut at No. 1. Both goosed interest by issuing a “deluxe edition” with additional tracks just days after issuing the standard edition. And both sold digital versions of the standard album in their own webstores for extremely low prices — $4 for Gunna’s and $3.49 for the Weeknd’s, Billboard noted.

These close numbers leave a lot of suspense as to which of these stars might be No. 1 next week, since the Weeknd clearly proved to have long commercial legs with his previous album, “After Hours.” Then again, if last week’s chart-topper, the “ Encanto ” soundtrack, continues to surge the way it did this week, it could be due for a return to No. 1 sooner rather than later.

“Encanto” fell two spots to No. 3 on the new chart, but that was illusory in reflecting its actual consumption. The soundtrack for Disney’s animated hit actually enjoyed a 32% boost for the week, chalking up 95,700 album-equivalent units, the highest weekly tally to date for the album since it came out in mid-November.

The Weeknd racked up some impressive bragging rights no one else could: he now has two top 10 albums at once. The other, his greatest-hits collection, “The Highlights,” moved up two spots to No. 8 with 36,000 album-equivalent units logged, an 8% increase from the previous week.

Adele is finally starting to look almost mortal amid this fresh firepower, as her “30” slipped a couple of spots to No. 4, its 48,300 units representing a modest 15% decline for the nearly two-month-old blockbuster.

Among other holdovers on the Billboard 200 was Morgan Wallen’s year-old “Dangerous: The Double Album,” hanging in at No. 5. Olivia Rodrigo, Drake, Doja Cat and Taylor Swift filled out the remaining spots in the top 10.

The leading singles in the Billboard Hot 100 will be announced Tuesday, with all of the publication’s charts coming a day later than usual this week due to the Martin Luther King Jr. Day holiday.

Click here to read the full article. The Kid Laroi’s “Stay,” his monster hit with Justin Bieber, is creeping up on 1 billion on-demand streams, per data from Luminate, with its official music video racking 546 million views on YouTube and counting. To say that Laroi has officially arrived would be an understatement. At only 18 years old, the Australian singer-songwriter has accomplished what many musicians aspire to in a lifetime: signed to Columbia Records, whose roster includes Adele, Bruce Springsteen and Harry Styles; been nominated for a Grammy; performed on “Saturday Night Live” (alongside Miley Cyrus for his breakout hit,...
MUSIC・22 HOURS AGO
Variety

Johnny Depp’s Lawyer to Amber Heard: ‘Mr. Depp Is Your Victim, Isn’t He?’

Click here to read the full article. Johnny Depp’s lawyer began her cross-examination of Amber Heard on Monday afternoon, seeking to undercut Heard’s claim that Depp physically assaulted her numerous times. Camille Vasquez, Depp’s attorney, presented a series of photos of Heard taken shortly after alleged incidents of violence. In the images, Heard did not appear to have bruises or other physical marks. “You should see what it looked like under the makeup,” Heard responded. Heard completed her direct testimony earlier on Monday, saying that she ultimately decided to leave Depp because she feared she would not survive the relationship. When it was her...
CELEBRITIES・2 DAYS AGO
Variety

Click here to read the full article. Faith Hill will never forget one of her earliest auditions. She read for director Anthony Minghella for 2003’s “Cold Mountain” for the role that went to Natalie Portman. “I read, I believe, the rape scene and another one. It was intense,” Hill tells me on the new episode of the “Just for Variety” podcast. “I had been on a few readings, but nothing like that.” Not that she didn’t do her homework beforehand. “I worked my tail off to be prepared for that,” Hill said. “Because for me, personally, I thought I have got to prove...
CELEBRITIES・23 HOURS AGO
Insider

The 2022 Billboard Music Awards were star-studded this year — and this one moment got everyone talking: Janet Jackson made a surprise appearance to present the Icon Award to her friend Mary J. Blige! The “Feedback” singer wore a deconstructed tuxedo look by Thom Browne, consisting of a tie, cropped jacket and skirt. Janet herself took home the Icon Award in 2018. Notably, the award has only been given out 11 times.
LAS VEGAS, NV・3 DAYS AGO
SheKnows

Click here to read the full article. It seems like everyone was rooting for Renée Zellweger and Ant Anstead to get together, including an unexpected duo: the Property Brothers. Drew and Jonathan Scott recently revealed that they were the ones that ended up getting Zellweger and Anstead to meet, and subsequently fall in love. And their hard work ended up paying off! Back on April 14, 2022, the Scott brothers sat down with ExtraTV to talk about everything from Drew’s upcoming fatherhood to Jonathan loving GF Zooey Deschanel’s Vanity Fair gown. While we loved the entire interview, we’re losing it over...
CELEBRITIES・25 DAYS AGO
OK! Magazine

Ryan Seacrest is weighing in on the ongoing court battle between the Kardashian-Jenner family and Blac Chyna.According to a new report from Radar, the TV producer made some bombshell claims in his deposition, which the famous family is trying to get blocked from the jury. As reported by the outlet, Seacrest — who is scheduled to take the stand in the trial — shockingly revealed in his deposition that he wanted Chyna's show with Rob Kardashian, Rob & Chyna, to move forward, despite the Kardashian-Jenner squad's claim that there was fear over Rob's safety as a result of the exes'...
CELEBRITIES・23 DAYS AGO
Hello Magazine

Princess Eugenie has taken to her Instagram Stories to make an exciting announcement related to The Anti-Slavery Collective, which she co-founded with her best friend Julia de Boinville back in 2017. Resharing a message from the charity organisation, the mother-of-one revealed she was posting "news from my charity". WATCH: Princess...
CELEBRITIES・23 DAYS AGO

Too $hort has worked with a score of legendary producers throughout his almost 40-year career, from Jermaine Dupri and Lil Jon to Daz Dillinger and DJ Pooh. But one big-name beatsmith he passed up the opportunity to work with was Kanye West. During a recent interview with VladTV, the Bay...
CELEBRITIES・23 DAYS AGO
Popculture

One of the stars of This Is Us is on the move to a new network in advance of the show's series finale. Deadline reported in March that Chris Sullivan, who plays Toby on the NBC series, will headline a comedy pilot for ABC. His new show is set to be titled The Son In Law.
TV SERIES・22 DAYS AGO
People

Paulina Gretzky walked down the aisle in Vera Wang!. The bride shimmered during her wedding with pro golfer Dustin Johnson on Saturday at Tennessee's Blackberry Farm. Gretzky showed off the stunning look on Instagram Monday in a photo of the newlyweds kissing. "4/23/22♥," she simply captioned the post. For...
BEAUTY & FASHION・22 DAYS AGO
Popculture

Kate Hudson has realized one of her dreams and has taken to Instagram to share the incredible news with her 15 million followers. Sharing two pictures of her looking casual in a pair of baggy dip-dyed trousers and a white tank top, and singing into a microphone, the actress announced a surprising career change.
CELEBRITIES・23 DAYS AGO
Popculture

Spring is always a big time for engagements and weddings, and two beloved internet personalities are the latest to update their relationship status. On April 18, Rachel "Seltzer" Quirico revealed she and longtime boyfriend Trevor "TorcH" Housten were tying the knot after 17 years together. Both of them are beloved figures in the esports world, with Seltzer notably starring in the Syfy reality show WCG Ultimate Gamer. She's also hosted numerous esports tournaments and events for TV/streaming outlets; she also made a recent appearance on G4 TV's Boosted.
RELATIONSHIP ADVICE・23 DAYS AGO
hotnewhiphop.com

50 Cent cast doubt on Megan Thee Stallion's recent comments about not having been in an “intimate relationship” with Tory Lanez, prior to the infamous shooting in July 2020 which left her with gunshot wounds. Megan's comment came during a recent interview with Gayle King, during which she...
CELEBRITIES・23 DAYS AGO
hotnewhiphop.com

It seems Coi Leray is getting fed up with the drama. She and her father, Benzino, have not seen eye to eye for quite some time, and despite numerous attempts to mend their relationship, they keep ending up back at square one. Yesterday, 50 Cent, whose been feuding with Benzino...
CELEBRITIES・25 DAYS AGO
Outsider.com

90 Day Fiancé: Before the 90 Days star Johnny Chao is showing off a new look on social media. The reality TV star rocked a fresh-faced look on the show. However, Chao debuted some new facial hair in his most recent post on Instagram. More specifically, he grew a beard and mustache.
TV & VIDEOS・23 DAYS AGO
Variety

Click here to read the full article. As the war in Ukraine approaches a grim, three-month mile marker, and the Russian military continues its relentless onslaught, the harsh crackdown on domestic opposition by the Putin regime has left a beleaguered film industry pondering its next steps. Many Russian filmmakers fear they’ll have no choice but to toe the party line, or to flee a country that is increasingly being shut out of the international community. Two-time Oscar nominee Alexander Rodnyansky (“Leviathan,” “Loveless”), the Kyiv-born producer who has called Russia home for nearly three decades, left Moscow on March 1 after being...
WORLD・2 DAYS AGO
Variety

Click here to read the full article. Amber Heard claims that Warner Bros. “didn’t want to include me” in the upcoming “Aquaman” sequel due to the fallout of her divorce from Johnny Depp. The actor said during her defamation trial against Depp that she was “actively scheduling timing for filming” the second “Aquaman” movie until Depp’s team called her a liar regarding her abuse claims against Depp. Heard said that “communications” about the sequel “stopped at that point.” Heard stars as Mera in several comic book films from Warner Bros. and DC Entertainment. She debuted as the character in “Justice League”...
MOVIES・2 DAYS AGO