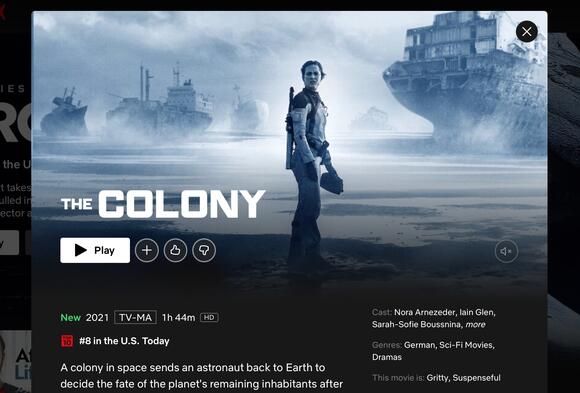 Apocalyptic movies are having a bit of a moment on Netflix right now. One of the biggest Korean-language releases in recent memory on the streamer, for example, is The Silent Sea . It told the story of a special team sent to the moon to retrieve an important sample from a research facilty. Meanwhile, back home, Earth has undergone “desertification.” And in addition to The Silent Sea , there’s also Don’t Look Up — a polarizing climate change allegory from director Adam McKay. It stars Leonardo DiCaprio and Jennifer Lawrence as astronomers warning the planet in vain about an impending catastrophe — and it went on to become one of the biggest titles of all time on Netflix. Also attracting considerable attention on Netflix right now? The Colony — a sci-fi title from Swiss director Tim Fehlbaum.

“Climate change. Pandemics. War,” one of the movie’s opening frames reads. “When Earth became uninhabitable, the ruling elite escaped to settle on Kepler 209.”

Should you check this one out? Unfortunately, it doesn’t have great reviews at the moment.

As of the time of this writing, The Colony has a 46% audience and critics’ score on Rotten Tomatoes . It’s still early days, though. The 46% critics’ score is only based on 24 reviews. While the 46% audience score was only garnered from more than 50 ratings. Netflix’s description of the movie, meanwhile, is as follows. “A colony in space sends an astronaut back to Earth to decide the fate of the planet’s remaining inhabitants after the colonists become infertile.”

At the moment, The Colony is the #3 movie on the streamer in the US. Netflix also maintains a combined Top 10 list for the US that includes both TV shows and movie. The Colony is #8 at the moment there.

Speaking of the apocalyptic themes found in Netflix content like The Colony , there’s also still more to come along these lines — and soon — to the platform.

One of the most-watched Netflix titles of 2021 was the Korean TV series My Name , about a young woman who infilitrates a crime gang to avenge the death of her father. Kim Jin-min, the director of that series, is also helming another K-drama coming to Netflix soon: Goodbye Earth . Also known as The Fool at the End of the World , this one will be an adaptation of a novel of the same name. And it will follow a group of people after humanity is told an asteroid is about to smash into Earth.

5 hidden gems to put on your Netflix watch list

When it comes to Netflix originals, much of the attention from audiences and the press tends to flow to English-language productions from the streamer. Barring exceptions like Squid Game, we’re talking Netflix series like Bridgerton, Ozark, and Stranger Things. And, on the film side, the streamer’s original movies like Don’t Look Up and The Adam Project.
TV & VIDEOS・2 DAYS AGO
BGR.com

Ever since it hit Netflix two weeks ago, The Lincoln Lawyer has been dominating the charts. This original drama series is based on the same Michael Connelly novels as the 2011 movie starring Matthew McConaughey. David E. Kelley — creator of Ally McBeal, Boston Legal, and Big Little Lies — is behind this adaptation, so it’s no surprise everyone is watching.
TV & VIDEOS・3 DAYS AGO
BGR.com

This nerve-shredding new Netflix series rocketed up the charts

Netflix might be struggling to retain its subscriber base, but it is still the biggest streaming service in the world. One of the reasons Netflix was able to keep growing for so long was its interest in serving an international audience. For instance, the most popular Netflix series of all time is from South Korea. The latest international series to make a splash is Wrong Side of the Tracks, which is currently the third most-watched show on Netflix.
TV SERIES・4 DAYS AGO
BGR.com

This heartwarming reality TV show is taking Netflix by storm

Netflix has wrung almost every idea you can think of out of the reality TV show dynamic that revolves around dating, love, and finding love. Shows like Love is Blind, The Ultimatum, and Sexy Beasts cover everything from people wearing masks on blind dates to hide their physical appearance to an experiment in which people propose marriage to each other on the strength of their personality alone. It doesn’t always make for quality TV. Until you get to something like Netflix’s Love on the Spectrum.
TV SERIES・2 DAYS AGO

I’ve never seen anything like Jibaro, from the new season of Netflix’s Love, Death, and Robots, before. In less than 20 minutes (this animated short’s runtime), I was mesmerized by the beauty and hyperrealism of the artistry. I was scared half to death by the intensity of the story. And my jaw was hanging open pretty much the whole time over the raw emotions that this short elicits — even though not a single word is ever spoken throughout the episode.
BEHIND VIRAL VIDEOS・2 DAYS AGO
BGR.com

A massive crater known as the “mouth to hell” began opening in the 1960s. Now, over 60 years later, the crater continues to grow, swallowing everything in its path. The most worrying part, though, is that scientists have no idea how to stop it. Russia’s “mouth to hell”...
SCIENCE・2 DAYS AGO
BGR.com

Every new version of iOS includes hundreds of features and bug fixes for the iPhone. In fact, there are often so many big changes that some of them go unnoticed by a majority of users. That was certainly the case for Visual Look Up on iOS 15, which can help you identify plants, animals, landmarks, and more with the tap of a button.
CELL PHONES・4 DAYS AGO
BGR.com

This is the loudest recorded sound in the history of Earth

To call sound an important part of human life would be an understatement. It’s so important, that MIT scientists are looking for ways to reverse hearing loss. Despite the important role it plays, sound can also be terrifying, especially when looking at the loudest recorded sound in history. But...
SCIENCE・2 DAYS AGO

In the wake of the horrific school shooting this week in the Texas town of Uvalde, Netflix has made an important change to one of its defining original TV series just ahead of its Season 4 debut on Friday. When Netflix users in the US sit down to watch the streamer’s long-awaited new season of Stranger Things — which, among other things, promises a much gorier and horror-themed vibe than seasons past — they’ll notice two things.
TEXAS STATE・1 DAY AGO
BGR.com

People are freaking out over this controversial new Netflix comedy special

With the release of Ricky Gervais’ new Netflix comedy special SuperNature, the streaming giant would seem to have another controversy on its hands along the lines of Dave Chappelle’s The Closer. Netflix dropped Gervais’ new standup special on Tuesday, May 24, and it largely gave audiences more of...
TV & VIDEOS・1 DAY AGO
BGR.com

Apple buying gaming studio EA might seem like a strange proposition, but it wouldn’t be the craziest deal we’ve seen in recent months. Microsoft bought Activision Blizzard for $69 billion. Then, Sony got Bungie for $3.6 billion. Microsoft and Sony are active players in the console gaming business, so the acquisitions are logical developments.
BUSINESS・4 DAYS AGO
BGR.com

The wide selection of available smartphone accessories on Amazon out there is a mixed bag. All those options for high-quality accessories are great, of course. But there are so many different choices out there that people often have trouble making decisions. Needless to say, we’re here to help you narrow...
CELL PHONES・3 DAYS AGO

If you’ve ever been frustrated on a video or audio call because overwhelming background noise makes it difficult for other people to hear you, there’s a somewhat hidden feature baked into iOS 15 that is nothing short of a lifesaver. It’s called Voice Isolation and like many great iPhone tips that aren’t widely known, this feature is hiding in plain sight.
CELL PHONES・4 DAYS AGO
BGR.com

Stunning XGIMI Horizon projector is $100 off, plus get a free $99 streaming dongle

Have you ever heard of a company called XGIMI? It’s not the most popular 4K projector company on Amazon. It doesn’t exactly have brand recognition on par with home theater industry leaders. And it won’t quite ring as many bells as Sony, for example. In the competitive...
ELECTRONICS・14 HOURS AGO
BGR.com

The Moon literally vanishes in this breathtaking lunar eclipse video

Netflix has been struggling to retain subscribers lately, but the new releases in June 2022 might convince some of them to stick around or resubscribe. One reason for this is that two of Netflix’s most beloved originals are returning with new seasons. First up is the sixth and final season of Peaky Blinders. This British crime drama has been airing since 2013, but its popularity took off when Netflix acquired the streaming rights a year later. Now, six years later, the story is finally coming to an end. Needless to say, we expect a lot from the final season.
TV & VIDEOS・18 HOURS AGO
BGR.com

Some of the coolest gadgets on Amazon are things you would never expect. We’re not talking about popular products like Apple’s AirPods Pro, though it’s worth noting that they’re on sale right now with a $52 discount. Hurry and you can snag AirPods Pro for just $197!
RETAIL・2 DAYS AGO
BGR.com

Ms. Marvel episode 1 will have a mind-blowing post-credits scene

Ms. Marvel is out on June 8th, which means we’re less than two weeks away from meeting a brand new MCU superhero. Kamala Khan (Iman Vellani) hasn’t appeared in any MCU movie or TV show so far, which means most fans don’t know anything about her. Well, unless you’ve been reading the comics, in which case you basically know what to expect. But the first Ms. Marvel details have started leaking out, with a reviewer claiming that episode 1 will deliver the show’s first post-credits scene.
TV SERIES・9 HOURS AGO
BGR.com

It seems reasonable to expect first-party accessories from huge technology companies to have at least the same level of quality as third-party products. Unfortunately, that does not seem to be the case for Google’s Pixel 6 cases. As spotted by The Verge, reviews on Amazon reveal a number of major issues with Google’s official case for the Pixel 6.
ELECTRONICS・2 DAYS AGO