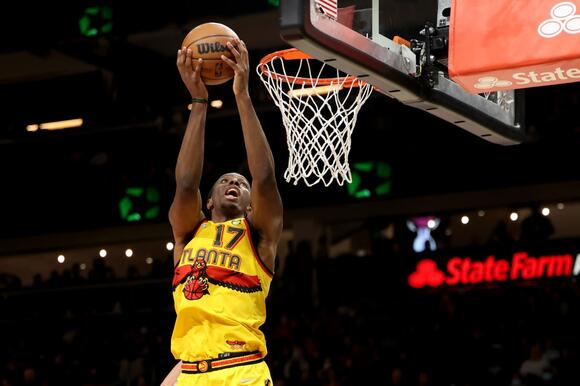 The Hawks got a big win in Atlanta on MLK Day.

The Hawks entered Monday evening's game on a five-game losing streak and were desperate for a win. As always, the Hawks organization put on an incredible tribute to Dr. Martin Luther King Jr. No surprise, the fans in Atlanta matched that energy and showed up in full force. All we needed was the team to play to their full potential, and they did just did that.

Despite not having Clint Capela or Bogdan Bogdanovic, the Hawks defeated the reigning champs 121-114. After a slow start, the Hawks' offense was unstoppable in the last three quarters, and their defense came alive late to make significant stops against one of the oldest teams in the league.

Soon-to-be two-time NBA All-Star Trae Young scored 30 points (14-14 from the free-throw line) and dropped 11 dimes. For the first time in what feels like forever, the whole team clicked and played with flow. Six players scored in double-digits. The team shot 44.2% from the field and 41.7% from deep.

Speaking of the 2021 NBA Finals MVP, Antetokounmpo scored 27 points. But his teammate, Khris Middleton, almost cost the Hawks the game. The All-Star shooting guard caught fire, scoring 34 points. Unfortunately for the Bucks, they have now lost four of their last five games and continue to struggle in crunch time.

After the game, Hawks head coach Nate McMillan pointed to the team's execution being the difference-maker. "On the defensive end of the floor, I thought we did a solid job. 'Big O' did a really nice job on Giannis. Just keeping him in front and not allowing him to get to the rim."

As for the team's energy, "That's the defense we need to play in the second half. We was able to get stops. Offensively, I thought Trae did a really nice job of slowing down in the fourth quarter and getting what we wanted as far as our set-calling and getting matchups we wanted. We was able to finish this game."

Trae Young took to the podium in a black hoodie and his iconic 'Ice Trae' chain. The floor general said, "Even though we lost the last two games, I think the energy and the way we played (battle on both ends, just came up short) I think we really used what we did and the good things we did and kind of translated over today. Shots just weren't going down early; in the fourth quarter, we stick to what we were doing early, and shots just went down."

Young looked forward (slightly) to the rest of the season. "Hopefully, this is a good turning point for us really to string together some wins and get back rolling. But you have to take it one game at a time and we're going to do that."

The man of the hour, Onyeka Okongwu, sat down at the podium in his sweats and immediately grabbed the stat sheet. "We all knew that we had to play pinpoint basketball, limit our mistakes, execute on both ends of the court. You know, capitalize on defense. They're a talented team offensively, so we knew that had to live with that on defense."

When asked about his approach to guarding the 'Greek Freak,' Okongwu said, "I'm always going to play physical. I'm always going to do what I do. You know be aggressive, physical, foul if I need to. I don't back down to anybody. That's how it's always been, how it always will be, and it's the type of player I am."

The Hawks next game is Wednesday night against the Minnesota Timberwolves at State Farm Arena. Stopping Karl-Anthony Towns, D'Angelo Russell, and Anthony Edwards will not be easy. As always, we will have you covered with our game-day coverage on Sports Illustrated's AllHawks.com .

The 19-year-old shooting guard has a high upside.
ATLANTA, GA・18 HOURS AGO
All Hawks

The All-NBA point guard opened up on Stacey King's podcast.
NBA・1 DAY AGO