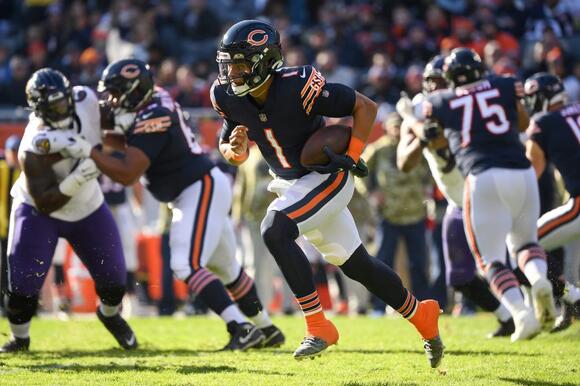 The Chicago Bears are going through the rounds trying to find a new power duo to lead the charge after firing head coach Matt Nagy and general manager Ryan Pace.

The wholesale changes come after a sorely disappointing 6-11 season in the Windy City. They also come with 2021 first-round pick Justin Fields potentially set to take over as the Bears’ franchise quarterback. Or not.

Mike Sando of The Athletic talked with an unnamed coach recently who indicated that the Bears’ job is highly desirable due to the roster construction and the fact that Fields could be traded. You read that right. Traded.

“From a roster construction standpoint, Chicago is a very desirable location if you ask me, including the fact that you could possibly trade (Justin) Fields,” a coach told Sando .

That seems to be highly unlikely on the surface. Sure Fields struggled as a rookie, but a lot of that had to do with the presence of Nagy calling plays and injuries to Bears skill-position players.

There’s is a scenario in which Chicago does indeed move off Fields. It’s all about who the team brings in to be its next head coach and general manager. Neither individual would have a built-in relationship with the former Ohio State star.

Then again, Chicago’s previous brass exhausted a ton of draft capital to move up to the No. 11 pick with the New York Giants for Fields last April. That included yielding a 2022 first-round selection (eighth overall). It would certainly be a bitter pill to swallow.

Those are obviously some terrible numbers from Fields. More often than not, he looked like a raw quarterback incapable of taking regular-season snaps. Perhaps, that’s what the thinking might be behind the scenes for the Chicago Bears.

Again, it’s all about the front office and head coach dynamic. Reports indicate that Chicago’s brass wants to hire a general manager and have that individual bring in a head coach.

Former Miami Dolphins head coach Brian Flores has been linked to the Bears’ opening after interviewing with the team late last week. There’s also a possibility that Chicago kicks the tires on Jim Harbaugh, who played for the team under Mike Ditka the last time this organization was widely relevant on the broader NFL stage.

Smith’s name is interesting in that his final draft as the Texans’ general manager included the selection of Deshaun Watson in the first round. of the annual event in 2017. As you likely already know, Watson will be traded from the Texans within the next two months should his ongoing sexual misconduct cases be settled in the Pro Bowl quarterback’s favor.

Watson was also linked to Flores before the head coach was fired by Miami. In fact, Flores’ stance on Watson is one of the primary reasons he was fired.

This adds a whole new layer to the idea that the Chicago Bears could look to move off Justin Fields after just one season. At the very least, it’s an interesting backdrop in the Windy City.

The upcoming Denver Broncos sale is headed towards a crucial point of the bidding process with the remaining five competitors
DENVER, CO・2 DAYS AGO
Sportsnaut

Brett Hundley signed with the Baltimore Ravens and joined the voluntary organized team activities, a portion of the offseason program
BALTIMORE, MD・2 DAYS AGO
Sportsnaut

For several years Kevin Love’s massive contract has been a financial anchor on the Cleveland Cavaliers’ salary cap. However, with
CLEVELAND, OH・2 DAYS AGO
Sportsnaut

What is the longest baseball game ever? World Series, playoff and MLB history

What is the longest baseball game ever? While Major League Baseball continues to look for new ways to reduce game
MLB・14 HOURS AGO
Sportsnaut

If Philadelphia 76ers general manager Daryl Morey does intend on finding another star player to combine with Joel Embiid and
PHILADELPHIA, PA・2 DAYS AGO
Sportsnaut

After five seasons entirely out of football, former San Francisco 49ers quarterback Colin Kaepernick is back in action. Or at
SAN FRANCISCO, CA・2 DAYS AGO
Sportsnaut

What is the longest home run ever hit in MLB history? Major League Baseball’s introduction of StatCast tracking makes it
MLB・14 HOURS AGO

The 2022 Major League Baseball season is underway with a month of games already behind us. That means it’s already
NFL・15 HOURS AGO
Sportsnaut

A new report claims that the NBA’s Portland Trail Blazers are expected to be up for sale at some point
PORTLAND, OR・1 DAY AGO
Sportsnaut

Kansas City Chiefs superstar tight end Travis Kelce knows he is not paid on a level equal to his production,
KANSAS CITY, MO・1 DAY AGO

One large piece of the puzzle has been put in place. Former Milwaukee Bucks assistant Darvin Ham has just agreed
LOS ANGELES, CA・1 DAY AGO
Sportsnaut

Even though Charles Barkley hasn’t played in the NBA since the end of the season in the year 2000, but
SAN FRANCISCO, CA・2 DAYS AGO
Sportsnaut

AJ Griffin is arguably the best shooter in the 2022 NBA Draft. In his lone season at Duke, Griffin was
NBA・8 HOURS AGO
Sportsnaut