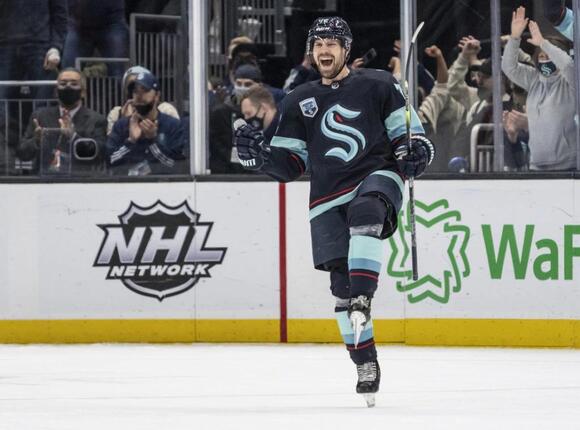 Joonas Donskoi, who has yet to score a goal this season, netted the clincher in a shootout as the Seattle Kraken snapped a nine-game losing streak with a 3-2 victory against the visiting Chicago Blackhawks on Monday afternoon.

Vince Dunn and Ryan Donato scored in regulation and Donato also tallied in the shootout for Seattle, which was 0-8-1 since Dec. 14. Goaltender Philipp Grubauer stopped 25 shots, plus both of Chicago’s attempts in the shootout.

Dominik Kubalik had a goal and an assist and Brandon Hagel also scored for the Blackhawks, who had a season-high-tying four-game winning streak snapped.

Chicago goalie Marc-Andre Fleury made 35 saves, including a penalty shot by Jared McCann with 6:26 remaining to preserve the 2-2 tie.

Donato scored in the second round of the shootout, taking a slow approach before lifting a shot over a sprawling Fleury. After a Chicago miss, Donskoi scored on a wrist shot high to the glove side.

It was scoreless until past the midpoint of the second period.

The Blackhawks tallied first, as Kubalik converted a breakaway off a long lead pass from Erik Gustafsson at 12:06 of the second.

Dunn tied it at 15:01, his shot from just inside the blue line deflecting off a defenseman trying to clear the front of the crease before ricocheting off the crossbar and over the goal line.

The Blackhawks regained the lead on the power play at 17:06 of the second. Patrick Kane passed to Kubalik in front of the net and he took two shots from close range, with Grubauer stopping both. The rebound of the latter shot squirted free to Hagel, alone at the right post, and he tapped the puck into the open side of the net.

The Kraken tied it on a two-on-one rush at 2:02 of the third. Donato’s initial shot was stopped by Fleury but a sliding Caleb Jones took out his own goalie and Donato scored on the rebound.

On Sunday, the New York Rangers managed to find more open ice for their offense and then survived a barrage
RALEIGH, NC・8 HOURS AGO
Sportsnaut

Trailing 2-1 in a playoff series is not uncharted territory for the Calgary Flames. They were in this exact situation
NHL・4 HOURS AGO
Sportsnaut

The Tampa Bay Lightning can return to the Eastern Conference Finals for a third straight season with a victory against
TAMPA, FL・20 HOURS AGO
Sportsnaut

Tampa Bay Lightning forward Brandon Hagel was fined $3,750 Monday for boarding the Florida Panthers’ Eetu Luostarinen. It was the
TAMPA, FL・10 HOURS AGO

The NHL asked police in St. Louis to ramp up security at the Avalanche’s team hotel and the Blues’ arena
SAINT LOUIS, MO・9 HOURS AGO
Sportsnaut

Bookmark. Save. Favorite. Do your thing. This is the one-stop-shop for everything NBA schedule-related heading into the 2021-22 season: Related:
BOSTON, MA・15 HOURS AGO
Sportsnaut

Months before the offseason arrived, everyone assumed Zach LaVine would re-sign with the Chicago Bulls. On the verge of becoming
CHICAGO, IL・2 DAYS AGO

Rapids extend home unbeaten streak to 23 with win over Sounders

Jonathan Lewis was credited with the lone goal, and the Colorado Rapids increased their home unbeaten streak to 23 matches
SEATTLE, WA・23 HOURS AGO
Sportsnaut

Now that the 2021-22 postseason is in full bloom, it’s time to check in on our NBA Playoff predictions with
MEMPHIS, TN・5 HOURS AGO
Sportsnaut

The Cincinnati Reds return home after their first winning road trip of the season, while the Chicago Cubs begin a
CHICAGO, IL・20 HOURS AGO

For the third time this postseason, the Dallas Mavericks’ organization faces a fine for how it has handled itself on
DALLAS, TX・1 DAY AGO
Sportsnaut

The Miami Heat were off to a hot start Saturday for their Game 3 Eastern Conference Finals matchup with the
BOSTON, MA・12 HOURS AGO
Sportsnaut

Chicago Bulls have interest in Matisse Thybulle trade this offseason; How it could work

Looking to push past their First Round playoff elimination, the Chicago Bulls are heading into the offseason with a strong
CHICAGO, IL・13 HOURS AGO
Sportsnaut

The Minnesota Timberwolves finalized a five-year deal with Denver Nuggets president of basketball operations Tim Connelly to have him lead
MINNEAPOLIS, MN・5 HOURS AGO
Sportsnaut

When the Minnesota Timberwolves made the decision to part ways with Gersson Rosas just before the start of the 2021-22
MINNEAPOLIS, MN・6 HOURS AGO
Sportsnaut

Miami Heat guard Tyler Herro has been ruled out of Monday night’s Game 4 against the Boston Celtics with a
MIAMI, FL・9 HOURS AGO
Sportsnaut

Twins look to remain on roll vs. Tigers