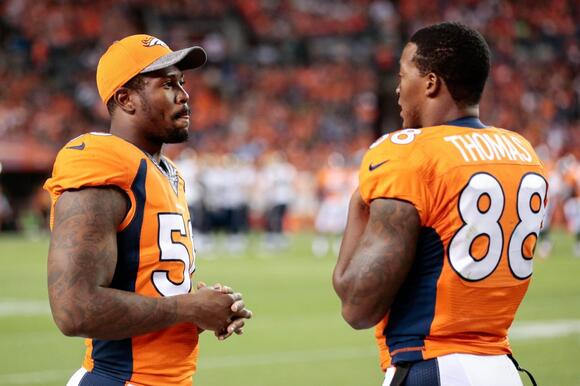 Von Miller and Demaryius Thomas were teammates with the Denver Broncos for the better part of eight seasons. Thomas found himself selected by Denver in the first round of the 2010 NFL Draft . One year later, Miller came off the board to the Broncos in the same round.

That’s one of the reasons it’s incredibly hard for Miller to overcome the tragic passing of Thomas at the age of 33 back on December 9.

Thomas passed away from a seizure due to complications of injuries he suffered in an accident back in 2019. The tragedy shocked an unsuspecting football world.

With his Los Angeles Rams set to take on the Arizona Cardinals in the NFC Wild Card Playoffs Monday night , Von Miller was seen paying homage to Thomas with a pretty awesome shirt inside SoFi Stadium in Southern California.

Miller had previously honored Thomas ahead of a game against these very same Ccardinals back on December 13. That included the Super Bowl MVP sporting a No. 88 decal on his helmet, which was Thomas’ number during his Pro Bowl career with the Broncos.

The 2021 season is in the books and defensive play culminated in the Los Angeles Rams becoming Super Bowl champions.
NFL・17 HOURS AGO
Sportsnaut

Arizona Cardinals and star quarterback Kyler Murray sees the direction the league is headed with the highest paid NFL players getting lucrative
GLENDALE, AZ・22 HOURS AGO

Under fire after facing several different allegations ranging from unlawful financial conduct to sexual harassment over a series of years,
NFL・1 DAY AGO
Sportsnaut

Former Tampa Bay Buccaneers tight end Calvin Magee, who was in his first year as an assistant coach at Jacksonville
TAMPA, FL・2 DAYS AGO
Sportsnaut

Joe Burrow has set the standard for success across college football that has become synonymous to his namesake. Any time
BATON ROUGE, LA・2 DAYS AGO
USA TODAY Sports Media Group

A tumultuous offseason still has a couple of more pieces of the puzzle that must be sorted out before the Cleveland Browns can call it a success. The looming specter of discipline for Deshaun Watson and the looming presence of Baker Mayfield on the roster are the two biggest. The...
CLEVELAND, OH・28 MINUTES AGO
Sportsnaut

For the third time this postseason, the Dallas Mavericks’ organization faces a fine for how it has handled itself on
DALLAS, TX・17 HOURS AGO
Sportsnaut