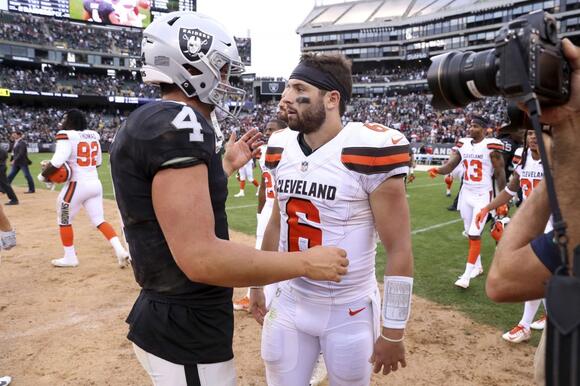 Derek Carr and the Las Vegas Raiders are coming off a pretty surprising 2021 campaign that saw them win 10 games and earn a spot in the NFL Playoffs.

With that said, changes are coming to Sin City mere days after the Raiders fell in the AFC Wild Card Playoffs to the Cincinnati Bengals.

That includes general managr Mike Mayock being fired . Interim head coach Rich Bisaccia’s future with the Raiders is also seemingly up in the air with the team looking to interview Jerod Mayo for the head coach position.

It’s definitely been a calendar year of drama for these Las Vegas Raiders. The includes Jon Gruden resigning in disgrace and the tragic situation surrounding wide receiver Henry Ruggs prior to his release from the Raiders .

The question now becomes what Vegas’ new brass is going to do at quarterback. The team will likely be hiring an outside general manager with a ton of qualified candidates mixed in. Meanwhile, rumors continue to persist that Michigan’s Jim Harbaugh could end up beign the Raiders’ next head coach .

The backdrop here is perceived interest in Cleveland Browns VP of Football Operations Kwesi Adofo-Mensah, who has a built-in relationship with Harbaugh dating back to their days together with the San Francisco 49ers.

How the head coach and general manager situation plays out will dictate whether Carr is back with the Raiders for a ninth season or is traded. Below, we look at four Raiders quarterback options for the 2022 season knowing full well that a change could be coming.

There’s not a lot of legitimate starting quarterbacks set to hit free agency in March. This somewhat limits the Raiders’ options in that there’s no real upgrade over Carr. Rather, a new general manager could look to bring in competition for the three-time Pro Bowler.

Of the group set to hit free agency, Andy Dalton , Jameis Winston and even Teddy Bridgewater could make some sense as competition for Carr. Again, it’s all about the general manager situation. One top candidate is former Green Bay Packers excutive Eliot Wolf could change the dynamics in a big way. He’s currently working with Bill Belichick in New England.

The Raiders were linked to Watson prior to north of 20 women accusing him of sexual misconduct. Having sat out the entire 2021 season after requesting a trade from the Houston Texans, there’s a darn good chance that Watson will be moved within the next two months . It really depends on how the legal situation plays out.

If so, an unnamed new general manager might opt to pull off an earth-shattering first move in that role. Said trade would likely include Carr heading to the Texans with multiple first-round and second-round picks. Regardless of our opinion regarding Carr, Watson would act as a major upgrade on the field. It’s now all about fit and whether the Raiders believe he’d work out in Las Vegas after the team saw some major off-field issues over the past several months.

This still seems to be the likeliest scenario. Carr, 30, isn’t what we’d consider to be elite by any stretch of the imagination. However, he’s acted the part of a team leader during some trying times over the past several months. He also continues to play at a relatively high level .

The wins and losses are not ideal. With that said, Las Vegas struggles prior to a surprise playoff appearance in 2021 had more to do with player personnel matters. Hence, why Mayock was fired. From a financial perspective, Carr is set to count a mere $19.88 million against the cap in 2022.

This might come out of left field. However, there’s every reason to believe the Raiders will chase after Mayfield should they ultimately hire the aforementioned Kwesi Adofo-Mensah while bringing in Harbaugh as a packaged deal.

The 2020 iteration of Mayfield would be an upgrade over what we’ve seen from Carr since he last earned a Pro Bowl appearance back in 2017. It also must be noted that Mayfield was dealing with injuries throughout the 2021 campaign. It impacted his play.

With Cleveland unlikely to sign the former No. 1 pick to an extension this off-season, there’s a chance that the team looks to trade him. If so, a Carr for Mayfield swap with other pieces heading to Cleveland could make sense.

And like clockwork, all of the speculation and hate about Derek comes out. Dude had a career season, and played through more adversity than anybody on here would be able to handle. Everybody who hates him are the type of people who think they are better than him because they play Madden on easy level. He should remain with the Raiders

As a freshman at Clemson, Justyn Ross burst onto the scene with an incredible season paired with Trevor Lawrence, racking
KANSAS CITY, MO・2 DAYS AGO
Pro Football Rumors

Former San Francisco 49ers quarterback Colin Kaepernick is working out Wednesday with the Las Vegas Raiders, according to NFL Network's Ian Rapoport. Kaepernick, 34, hasn't played in the NFL since 2016 when he became the center of political debate by kneeling during the playing of the national anthem as a means to protest racial inequality and police violence. At the end of the 2016 season, Kaepernick became a free agent and hasn't been on an NFL roster since.
LAS VEGAS, NV・2 DAYS AGO
The Spun

What Raiders Owner Mark Davis Has Said About Colin Kaepernick

Colin Kaepernick made more headlines on Wednesday afternoon when it was reported that he'll be officially working out with the Las Vegas Raiders. This is the first workout he's had with an NFL team since he was cut from the San Francisco 49ers in 2016. Raiders owner Mark Davis has...
SAN FRANCISCO, CA・2 DAYS AGO

Initially, league sources relayed to ESPN that Kaepernick was set to work out with the Las Vegas Raiders at some point this week. However, NFL Network has since reported that the workout was actually occurring on Wednesday. Kaepernick has essentially been in NFL exile since he began kneeling during the...
LAS VEGAS, NV・2 DAYS AGO
ClutchPoints

The NFL world received some major news on Wednesday when it was announced that former San Francisco 49ers quarterback Colin Kaepernick worked out for the Las Vegas Raiders. Kaepernick, who hasn’t had a workout for five years after being shunned by the league for his protests of police brutality, could be staring at his most realistic NFL chance in quite some time.
NFL・1 DAY AGO
Sportsnaut

Kansas City Chiefs superstar tight end Travis Kelce knows he is not paid on a level equal to his production,
KANSAS CITY, MO・14 HOURS AGO

OTAs continued for the Las Vegas Raiders this week with players speaking to the media, among them offensive tackle Kolton Miller. The best draft pick of the Jon Gruden era is, without a doubt, Miller. He’s consistently improved each year since 2018. A player that received tons of criticism following an underwhelming rookie campaign, Miller has become a fan favorite and a stalwart on the Raiders’ offensive line. Heading into the 2022 season, the Raiders are looking to Miller to take his game to another level and begin to earn individual recognition while his team preps for a postseason run.
NFL・13 HOURS AGO
Sportsnaut

For both Las Vegas Raiders Coach Josh McDaniels and quarterback Derek Carr, there is a lot to prove this upcoming season. McDaniels will be looking to put doubts regarding his ability to be a successful head coach to rest, and Carr will be looking to prove he has what it takes to lead the Raiders on a Super Bowl run.
MINNEAPOLIS, MN・2 DAYS AGO
Sportsnaut

It may have taken him a few years to get here, but Buffalo Bills safety Jordan Poyer is one of
BUFFALO, NY・2 DAYS AGO
RaiderMaven

Barry Sanders was influenced by the great running backs that don the Silver and Black.
PARADISE, NV・1 DAY AGO

Who are the highest paid NFL players? As the salary cap climbs, the top NFL salaries soar every year with
NFL・8 HOURS AGO
Sportsnaut