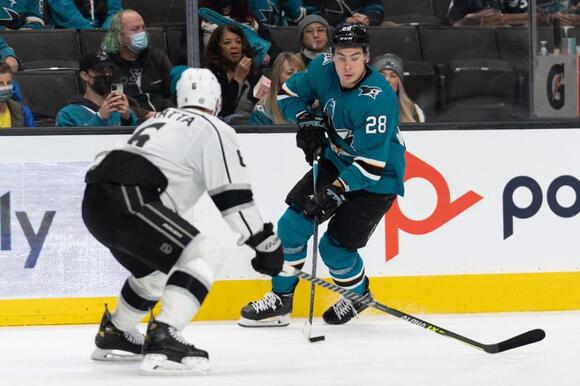 Timo Meier scored a franchise-record five goals to lead the San Jose Sharks to a 6-2 win against the visiting Los Angeles Kings on Monday afternoon.

Meier scored three goals in the first period and two more in the second to break the previous record of four goals shared by Owen Nolan, Tomas Hertl, Patrick Marleau and Evander Kane.

Hertl had four assists, Erik Karlsson had three assists and James Reimer made 39 saves for the Sharks, who had combined for one goal in their previous two games.

Anze Kopitar and Mikey Anderson scored and Jonathan Quick made 11 saves for the Kings, who had won four in a row and six of seven.

Meier notched his second career hat trick when he lifted a loose puck in front of the crease high in the net for a 4-0 lead with 51 seconds left in the opening period.

Quick only stopped four of eight shots in the opening period.

Meier scored his first goal on a power play for a 1-0 lead at 3:02. Brent Burns fed Meier coming through the right circle and he scored on a one-timer.

Rudolfs Balcers scored for the second straight game to extend the lead to 2-0 at 15:56. Balcers missed 14 games with a lower-body injury before returning in a 2-1 overtime loss to the visiting Pittsburgh Penguins on Saturday night.

Meier scored again at 18:48 to make it 3-0. He swung and missed at a rebound, but then followed the puck into the right circle, where he spun and shot the puck past Quick.

Kopitar put the Kings on the scoreboard when he scored with 16 seconds left in the first period to make it 4-1.

Meier scored another power-play goal at 1:24 of the second period to stretch the lead to 5-1.

He broke the franchise record with 28 seconds left in the second period for a 6-1 lead, his 20th goal of the season.

Meier had several chances to become the first NHL player with six goals since Darryl Sittler in 1976, but came up short.

Oilers, Flames focus on goal prevention ahead of Game 2

As wild as their series opener was, neither the Calgary Flames nor Edmonton Oilers are expecting anything close to a
NHL・7 HOURS AGO
Sportsnaut

The league announced the schedule Thursday for the 2022 NHL Awards winners. The winners of seven trophies will be announced
NHL・14 HOURS AGO
Sportsnaut

Gerard Gallant of the New York Rangers, Andrew Brunette of the Florida Panthers and Darryl Sutter of the Calgary Flames
NEW YORK CITY, NY・15 HOURS AGO