Levine: There will never be another Les Grobstein 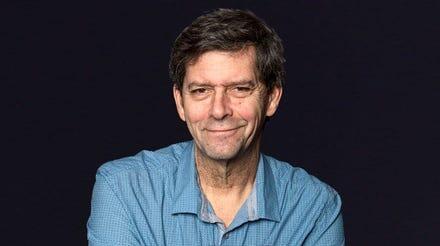 (670 The Score) My first day in a press box 40 years ago, Les Grobstein came rushing into the seating area at Wrigley Field and tossed two huge shoulder bags on the countertop and on the floor under his seat.

"Nice to meet you – who are you working for and where are you from?” Les asked with a smile while he unraveled his microphone cord and pulled out his Marantz tape recorder.

The next three hours were a prelude to our relationship and a window into the mind of a unique man who I was privileged to call a colleague and friend for the next four decades. On Sunday, Les passed away at age 69, and we’ll miss him dearly.

In that first meeting, Les told me about the history of South Shore High School (keep in mind Les was a North Sider and occasionally attended Von Steuben High School) and the games he covered during the Public League playoffs in the late 1960s and early 1970s at Eckersall Stadium and Gately Stadium.

I quickly learned Les thought he was always going to be the next Jack Brickhouse in Chicago. He would tell me that from the time he was seven years old, his goal was to broadcast Cubs, Bears and Blackhawks games. (The Bulls didn’t exist at that point.) He would go to games with his grandfather as a child and not only talk to the players but also literally sneak up to the old press box at Wrigley Field and converse with Brickhouse, Lou Boudreau, Vince Lloyd and Lloyd Pettit, who were Cubs radio and television announcers.

At age 13, Les became friends with legendary public address announcer Pat Pieper, who handled the Wrigley PA microphone for 50 years. Les would sometimes drive Pieper from the ballpark to his night job at the Ivanhoe Restaurant, where he was the maître d’. Eventually, Pieper would help Les get into the ballpark early so he could hang around for batting practice.

When Les had his Bar Mitzvah in 1965, his dad paid both Bears running back Ronnie Bull and center Mike Pyle to attend the service and party. You see, Les was destined to be a Chicago broadcaster with his loving parents supporting the idea that you can be anything you set your mind to be. He did that and more. What a trail he blazed.

Les was the sports director at WLS radio for 10 years. He built trips to every Super Bowl, World Series and NBA Finals into the budget. That type of coverage was unheard of by a local radio personality. He ended up covering every Super Bowl from 1972-2005. Les and I covered 15 World Series and 10 MLB All-Star Games together. He would sometimes fly in for one World Series game and take a red-eye flight home in time to do his morning broadcast on WLS. He would often go back to the World Series in the afternoon.

Les and I worked together at The Loop, WMVP and WSCR radio stations. He was always a caring friend and colleague, and he was a man with a heart of gold. When Les heard our friend and Channel 26 television legend Kenny McReynolds’ young daughter had passed away, he immediately left his broadcast at Notre Dame and drove to be with Kenny and his partner Janet as they grieved.

We traveled to events many times together. On an off day in Atlanta for the 1996 World Series, Les – who loved history – suggested we go to the Jimmy Carter Presidential Library. It was around 11 a.m. on a Monday. Nobody was in the place except the Grobber and me. After about an hour, we were about to leave when Carter and two Secret Service bodyguards walked in. We talked to him, and he asked us if we were Braves fans. Les somehow got the former president into a conversation, and he guided us through his exhibits for the next 20 minutes.

Les broke numerous stories during his career, but none rivaled the blowup of Cubs manager Lee Elia on April 29, 1983. After a tough loss for his Cubs, Elia went on a profanity-laced tirade. It went viral – if that term had been applicable in those days – thanks to Les recording it and sending it to about 30 radio stations across the country through Associated Press wire services. Every year on that date, Les would do a special anniversary broadcast on the Score's overnight show that he hosted from 2009 until this past week.

Les was brilliant in his own particular way. His recall for sports history was unparalleled. The Grobber always regaled us press box wags and his overnight listeners with Chicago sports history trivia. He was really impossible to stump on any sports subject.

Like all of his other friends and listeners, I'll miss the lively spirit and soul of Les, who was truly a kind person and a great Chicago radio personality. Les, you had 52 years of excellence in this industry. Your mission was accomplished on this planet.

In ancient Greece, they would ask only one question when a man passed away. Did that person have passion?

No one had more drive and desire for his work than Chicago's own Les Grobstein.

Bulls to play Pistons in Paris on Jan. 19

The Bulls and Pistons will play each other next Jan. 19 in Paris, the NBA announced Tuesday. They’ll play the regular-season game at Accor Arena. It will mark the Bulls’ third game in Paris, as they played two preseason games there in 1997.
CHICAGO, IL・1 DAY AGO
670 The Score

The biggest question hovering over the Bulls’ offseason is whether star guard Zach LaVine will return to Chicago when he hits unrestricted free agency.
CHICAGO, IL・1 DAY AGO
670 The Score

Teven Jenkins is healthy, rejuvenated and ready to prove his place with Bears

Second-year offensive tackle Teven Jenkins is healthy after his rookie season was derailed by back surgery, and he’s ready to prove his place with the Chicago Bears.
CHICAGO, IL・16 HOURS AGO
670 The Score

Bears quarterback Justin Fields is showing more confidence ahead of his second NFL season, something that has inspired hope among his teammates and coaches.
CHICAGO, IL・1 DAY AGO

Tim Anderson had told Josh Donaldson in 2019 to stop calling him 'Jackie': 'He knew exactly what he was doing'

White Sox shortstop Tim Anderson has refuted Yankees third baseman Josh Donaldson’s claim that directing a “Jackie” Robinson comment at Anderson on Saturday could’ve in any way been rooted in a long-running joke.
CHICAGO, IL・1 DAY AGO
670 The Score

What could Bears get in a Robert Quinn trade?

Bears veteran pass rusher Robert Quinn could be looking for a trade this offseason, so what could Chicago get in return? Tribune reporter Brad Biggs answered that on the Mully & Haugh Show.
CHICAGO, IL・2 DAYS AGO
670 The Score

Holmes: Yankees' Josh Donaldson is a 'bad guy' who doesn't deserve the benefit of the doubt