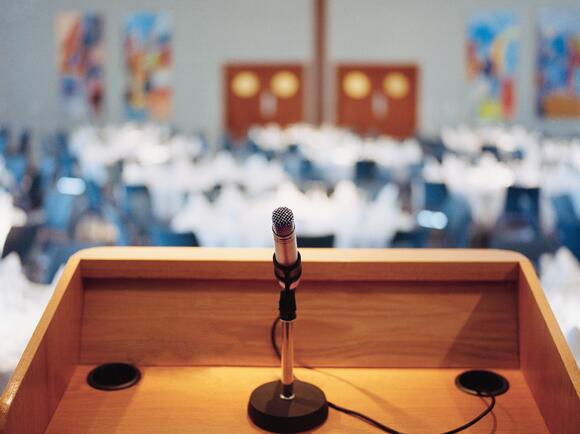 A pastor at a megachurch based in Tulsa, Oklahoma, apologized on Twitter for rubbing his spit on a member of his church as captured in a viral video.

Pastor Michael Todd, who is one of the lead pastors at Transformation Church, said in a video that his demonstration during a sermon was "disgusting" and a "distraction" after watching back footage from the service.

"I was trying to make the word come alive," he said of the video in which he spits on his hand twice before rubbing a man's face on stage in front of congregants. Just before spitting on his hand, Todd said,  "Receiving vision from God might get nasty."

The man on stage next to Todd was identified as his brother Brentom Todd, according to Tulsa World. In the video, there is an audible gasp from the audience, to which Todd responds, "How you just reacted is how the people in your life will react when God is doing what it takes for the miracle."

Todd's apology came after negative reactions to the initial video, which spread across the internet.

"It's never my intention to distract others from God's Word and the message of Jesus… even with illustrations!" Todd wrote on Twitter. "I apologize for my example being too extreme and disgusting! I Love Everybody."

"I truly understand now why the elders used to frequently tell us that we're in the last days," Atlantic columned Jemele Hill tweeted.

Some social media posters pointed out how Todd's actions might be especially unwise during a pandemic . "What is the CDC going to do about Mike Todd?" one tweet read.

In the follow-up video, Todd says that he hopes people who saw the viral video will watch the rest of the message to hear the points he was making.

These false prophets and teachers will be dealt with accordingly.I love God,but I don't listen to ANY OF THEM! As the Bible says u will know them by their fruits!

Rev Todd trying to what Jesus done in the bible when he heal this blind man reach down and split in his hands pick up some mud and put on his eyes so he could see . But Rev Todd is not Jesus and he can't do what JESUS do . That's why it turn out wrong.

Cardi B under fire after controversial tweet about Texas school shooting

Cardi B has faced major backlash over a controversial post she made on Twitter amid the news that there had been yet another fatal school shooting in the US. On May 24, the world was left shocked and saddened over the news a teenage gunman had killed at least 19 students and two teachers at an elementary school in Texas.
TEXAS STATE・1 DAY AGO
Whiskey Riff

As horrific as it was learning of the news that 19 kids and two teachers were killed by a school shooter at Robb Elementary in Uvalde, Texas, there’s one hero from the heartbreaking event that deserves to be recognized. Jacob Albarado, an off-duty US Customs and Border Protection agent,...
UVALDE, TX・1 DAY AGO
Daily Beast

Lee Greenwood, the staple of Trump rallies and the most prominent musician to pull out the National Rifle Association’s annual meeting in Texas, told Fox News on Friday that his conscience would not allow him to perform at the event in the wake of the Uvalde school shooting. Greenwood...
TEXAS STATE・1 DAY AGO
Business Insider

"My mom tells me he probably would have shot me too, because he would always say I didn't love him," Salvador Ramos, 42, said of his son.
UVALDE, TX・2 DAYS AGO

I'm a teacher who survived the Parkland shooting. Here's my message to Uvalde, Texas.

"In the coming days, you will work your schedules around funerals," writes Kimberly Krawczyk. "You'll struggle to get out of bed and forget what day it is."
UVALDE, TX・1 DAY AGO
Business Insider

A Texas minister helps fly dozens of women to New Mexico every month to get abortions. He's one of many religious leaders working on coordinating abortion care if Roe v. Wade is overturned.

Some clergy have long helped women seeking abortions but they've been "drowned out by a very fringe belief," one reverend said of abortion opponents.
TEXAS STATE・16 HOURS AGO
Business Insider

Uvalde gunman's mother begs people not to judge him for killing 21 people: 'Forgive me, forgive my son'

Adriana Martinez, the mother of the gunman, spoke out about the shooting in an interview with CNN affiliate Televisa on Friday.
UVALDE, TX・1 DAY AGO