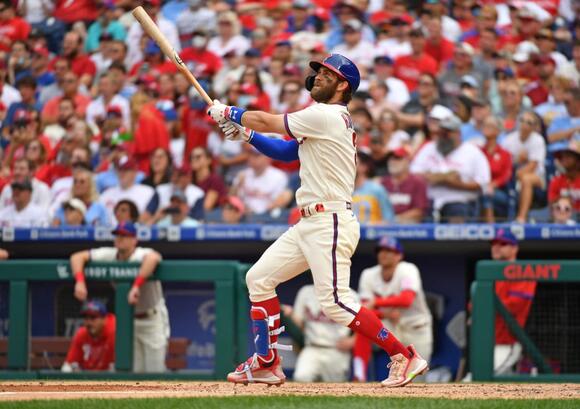 The 2021 Phillies were a top heavy team, both in terms of production and salary. Given that level of top talent, which players from last year's team have a shot at reaching Cooperstown?

The 2021 Phillies were a top heavy team. It was apparent not just by their play but also by their payroll, 37.2% of the Phillies entire payroll went to Bryce Harper, Zack Wheeler, and Andrew McCutchen alone.

It would seem that a team so unbalanced with payroll would have a few shining stars immortalized in Cooperstown. So, where do the Phillies top players land, who might end up in the Hall of Fame and what are their chances?

For these six players, we use a sliding scale to evaluate their likelihood ranging in order from likely to plausible to unlikely to impossible.

Among active players, Harper is 19th in wins above replacement. Among players born after Oct. 16, 1992, none have more WAR than Harper.

Perhaps more than anything else to Harper’s benefit was the age at which he debuted. At just 19 years and 195 days, Harper’s ability to rack up counting stats, 1,273 hits and 267 home runs, before his 30th birthday gives him an extreme edge over players like Chase Utley or Rhys Hoskins, both of whom debuted in their age-24 seasons.

While 500 homers is not the Hall of Fame free-admission card it used to be, Harper would need to average only 23.3 home runs a year in the remaining 10 seasons of his contract to reach 500. Since 2015, he’s averaged 30.3 home runs a year, that includes 2020’s shortened season.

While Harper has been inconsistent year-to-year for much of his career, he’s never been bad, slashing .279/.392/.524 for an OPS+ of 142 for his career. Players like Larry Walker, Reggie Jackson, Al Kaline, Roberto Clemente, Vlad Guerrero, and Tony Gwynn all reached Cooperstown as offense first right fielders who had an OPS+ below 142.

It should also be noted that Baseball-Reference lists the five most similar batters to Bryce Harper through his age-28 season as Barry Bonds, Justin Upton, Andruw Jones, Giancarlo Stanton, and Mike Trout.

While McCutchen certainly won’t go into Cooperstown wearing a Phillies cap, his three seasons in Philadelphia were all a productive part of a semi-graceful decline.

Unfortunately, McCutchen’s placement in center field as a young player took away huge chunks of value on defense. Through his age-30 season, McCutchen was worth -73 DRS, dropping his oWAR from 54.9 to a total WAR of 46.0 for his career.

Among center fielders. McCutchen’s listed position on Baseball-Reference, only four have made the Hall of Fame with 46.0 WAR or less: Turkey Stearns, Earle Combs, Edd Roush, and Hack Wilson, all of whom were inducted via the Veterans Committee.

Should McCutchen make the Hall of Fame, he will need to play consistently for another three to four years at least and continue to be a productive offensive player. While McCutchen’s illustrious 2013 MVP award adds a nice sparkle to his resume, his analytics won’t be enough to compel younger voters, thus he’ll need the help of counting stats.

If he can reach that peak, McCutchen’s status will change from plausible to likely.

Nola has the benefit of age on his side. He’s been wildly inconsistent throughout his career, posting both replacement level and Cy Young level seasons.

At only 28, there’s still ample time for Nola to find some hidden ability, but time is running out. Interestingly, Baseball-Reference lists the most similar player to Nola through age 28 as Max Scherzer, and the comparison is apt.

Yet, the list of pitchers who’ve gone on to Hall of Fame career paths after turning 30 doesn’t begin with Scherzer, Randy Johnson is the prime example of this, he had a 3.95 ERA over 818.0 IP through age-28.

Wheeler’s case is similar to Nola’s, perhaps had Wheeler not missed two seasons after Tommy John surgery, we might be talking of him in different connotations. However, Wheeler has improved linearly.

Barring a slight decline in 2019, Wheeler’s ERA has improved every year since his return from injury in 2017, with 2021 being the most productive year of the 31-year-old’s seven-year career. However, it might be too little, too late for Wheeler.

As much as he’s improved the past few seasons, Wheeler doesn’t have the platform Nola does. With just 20.6 career WAR, Wheeler would need to double his total career output twice over to be considered a plausible Hall of Famer.

While Wheeler’s rate stats are good and he has the peak year’s to match, it would be tough to see him continue his current rate of dominance through age-36. Wheeler relies heavily on a high velocity fastball that’s almost certain to decline with age, unfortunate given that he’s on the wrong side of 30.

Wheeler will likely be an impressive pitcher for a few more years to come, especially due the emergence of his revamped slider in 2021, but he would have to move heaven and earth to have a real shot at the Hall of Fame.

Realmuto is a very interesting case. Catchers are valued primarily for their defense, a trait at which Realmuto excels. Yet, intangibles run rampant in catcher defense, with little data to track just how valuable a backstop is.

Yadier Molina is considered a lock for the Hall of Fame, even though he has just 42.1 WAR to his name. Newer analytics show what baseball fans always presumed, that Molina’s value as a pitch framer is almost unheard of. He’s worth 145 framing runs according to FanGraphs since 2008.

Realmuto is worth 19.9 FRM since 2017, a respectable total, but not enough to send him to Cooperstown. Yet, it’s possible that other catcher valuation metrics could be developed by the time Realmuto’s career is finished.

He has the bat to make the Hall of Fame as a catcher, but he’ll need a defensive boost.

23.3 WAR as an athletic catcher going into his age-31 season is respectable, but like every player on this list but Harper, he’d need a brilliant post-30 career, plus the help of new catcher analytics that favor his defense play. Some postseason heroics wouldn’t hurt either, looking at you, Carlton Fisk.

Like the other players on this list, and seemingly every Phillie ever, Hoskins is an inconsistent player. However, year-to-year, he’s put remarkably similar numbers.

Since his rookie season, Hoskins has managed an OPS between .819 and .887. He’s also mashed home runs at a consistent rate as well, between 4.1% and 6.1% per year since his rookie campaign.

Hoskins’ defense, though, removes any shot the slugger would have had at a Hall of Fame career, even since being moved back to his natural first base in 2019, Hoskins has been worth -9 DRS with a total of -28 for his career.

His WAR totals reflect that number, never rising above 2.2 in any season and a total of 8.3 for his career. There are no comparisons for a player like this making the Hall of Fame.

Unless Hoskins does steroids and hits 500 home runs for his career, he won’t be making the Hall of Fame.

Our latest edition of our Substack newsletter Phillies Phocus is here!
PHILADELPHIA, PA・2 DAYS AGO
Inside The Phillies

The Philadelphia Phillies' last in-house hope at center field is on the comeback trail.
PHILADELPHIA, PA・1 DAY AGO
Inside The Phillies

Philadelphia Phillies Offense Silenced in First of Three Against Padres

The Philadelphia Phillies dropped the first game of three to the San Diego Padres 3-0 on Tuesday evening.
PHILADELPHIA, PA・1 DAY AGO
Inside The Phillies

The Philadelphia Phillies evened the series against the San Diego Padres on Wednesday night.
PHILADELPHIA, PA・21 HOURS AGO
Inside The Phillies

The Philadelphia Phillies bullpen has an ERA that ranks ahead of only three MLB teams. They need relief help, but where will it come from?
PHILADELPHIA, PA・2 DAYS AGO
Inside The Phillies

The Philadelphia Phillies have a center field problem. They must fix it, and quickly.
PHILADELPHIA, PA・11 HOURS AGO
Inside The Phillies

Philadelphia Phillies MiLB Recap: The Return of the Kingery

#Steroids#Cooperstown#The Hall Of Fame
Inside The Phillies

After his strong debut with the Philadelphia Phillies, the promising young prospect made his Triple-A debut.
PHILADELPHIA, PA・19 HOURS AGO
Inside The Phillies

The Philadelphia Phillies traded shutouts with the San Diego Padres, but came up on the short side.
PHILADELPHIA, PA・14 HOURS AGO
Inside The Phillies

The Philadelphia Phillies' superstar won't see the outfield for another few months.
PHILADELPHIA, PA・1 DAY AGO