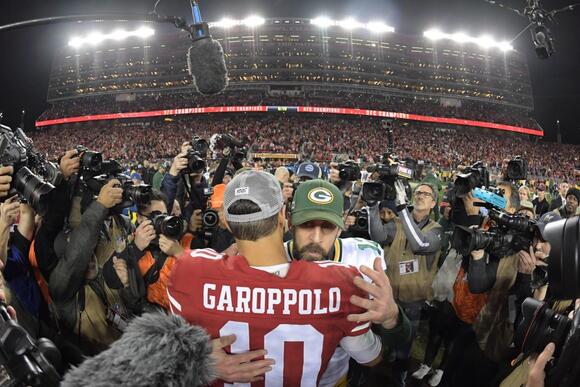 For the fourth time in roughly a decade, the San Francisco 49ers and Green Bay Packers will do battle in an NFL Playoff game.

This was made possible by San Francisco’s thrilling upset win over the Dallas Cowboys in the NFC Wild Card Playoffs Sunday afternoon.

Jimmy Garoppolo and the 49ers will now take to Lambeau Field to go up against the top seed Packers and likely NFL MVP Aaron Rodgers . Below, we provide four bold predictions for the 49ers at Packers.

Davante Adams goes off for 150-plus yards

San Francisco’s questionable cornerback group actually did a good job against CeeDee Lamb, Amari Cooper and an elite Dallas Cowboys wide receiver unit in the Wild Card round. In fact, Lamb caught just one pass in the 23-17 49ers win.

We’re not expecting the same performance from rookie corner Ambry Thomas and Co. come Saturday night at Lambeau Field. Davante Adams is a completely different monster. Over the course of the past two seasons , the Fresno State product has caught 238 passes for 2,927 yards and 29 touchdowns. He’s also tallied an absurd 75% catch rate.

Back in Week 3 against these 49ers, Adams caught 12-of-18 targets for 132 yards and a touchdown. Sure that was going up against a recently-benched Josh Norman. But the fact remains that he has a plus-level matchup against a questionable group of 49ers cornerbacks.

Elijah Mitchell tallies over 100 yards in another brilliant performance

Green Bay ranked 11th in the NFL stopping the run during the regular season. However, a lot of that had to do with other teams playing from behind and abandoning the run. Opposing running backs averaged 4.7 yards per rush against this unit (third-best in the NFL).

As for Mitchell, the rookie sixth-round pick from Louisiana has been all sorts of awesome this season. He put up 96 yards and a touchdown on 27 attempts against the Cowboys last week. All said, Mitchell has tallied 1,059 rushing yards in 12 games this season, postseason included. With San Francisco slated to rely on the rushing game big time, look for Mitchell to eat.

It’s absolutely crazy to look at. Since the start of the 2018 season, Rodgers has thrown 136 touchdowns compared to 15 interceptions. Those 15 picks have come on 2,223 pass attempts. He’s led the NFL with the lowest interception percentage in each of the past four seasons.

This type of mistake-free football is one of the primary reasons Green Bay has home-field advantage throughout the NFC Playoffs.

With that said, we’re expecting the 49ers to pull off a rare interception of Rodgers come Saturday evening. He’s thrown five touchdowns against three interceptions in three career playoff starts against San Francisco — all losses. For some reason Rodgers struggles more against the team he grew up rooting for than any other opponent. To an extent, that will come into play here.

49ers at Packers goes to overtime

It was back in September that a Mason Crosby field goal in the last seconds sent the Packers to a 30-28 win over San Francisco at Levi’s Stadium. This is a clear indication that the two teams are evenly matched.

Even with the temperature set to be roughly two degrees in this one, we’re not expecting San Francisco to lay down and get blown out. Its most-recent wins over the Rams and Cowboys on the road is a prime example of this. From an historical perspective, the 49ers are also 3-0 against Aaron Rodgers and Co. in the playoffs.

Now, to the nuts and bolts. This bold prediction includes Jimmy Garoppolo leading the 49ers on a game-tying touchdown drive late in the fourth quarter with a touchdown pass to George Kittle. Unfortunately for Kyle Shanahan’s squad, it won’t be enough.

Green Bay finds itself as 5.5-point favorites in this one. It’s not a huge point spread given the home-field advantage that Lambeau offers up.

Either team could come away with a win here. It really is a toss up. Even then, there has to be concern in San Francisco over handling the Aaron Rodgers and Davante Adams pairing.

In the end, that will make the difference with Green Bay coming out on top in overtime on a Mason Crosby field goal.

Teams seam to forget Greenbay has a Running game as well… jus sayn… I’ve seen Dillon n Jones…. Both great backs n strong. I think that may make the difference in this game…. It’s not all about trying to shut Rogers down. N I hate when fans blame refs… come on stop with starting the excuses already. May the best team win … either way I’m a NFC guy… I’m Greenbay fan… but my mom whom is deceased has always been a 49s fan… so in my heart both teams are special to me.

9ers didn't really prove anything last week. I mean, really, it was the McCarthy led Cowboys in the playoffs. That was a guaranteed win.

After Treylon Burks had a very bad day in his first practice for the Tennessee Titans, he looked much more
NFL・2 DAYS AGO
Sportsnaut

We’ve reached the slow part of the NFL offseason after the draft before training camps open up later this summer.
MINNEAPOLIS, MN・2 DAYS AGO

It doesn’t take much to spark a frenzy among the NFL community. Our latest example of this craze came when
NEW ORLEANS, LA・44 MINUTES AGO
Sportsnaut

The Buffalo Bills signed their first-round pick Kaiir Elam to his four-year contract worth a fully guaranteed $13.69 million, Pro
NFL・1 HOUR AGO
Sportsnaut

Who doesn’t need a 6-foot-10 forward with 3-point range and an on-your-head dunk mindset? That’s what oddsmakers are asking about
NBA・1 HOUR AGO

Set to become a free agent this past offseason, the Cincinnati Bengals made sure to place the franchise tag on
CINCINNATI, OH・3 HOURS AGO