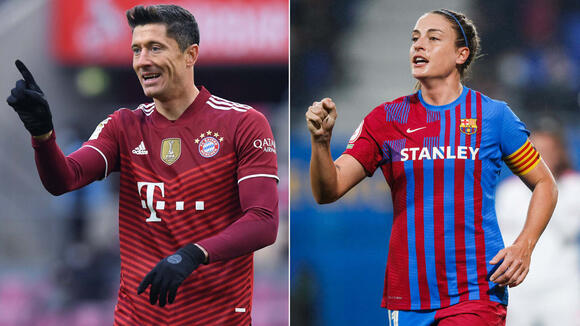 Robert Lewandowski took home his second straight award, but one star competitor left him off the ballot completely.

After winning his seventh Ballon d'Or in November, Lionel Messi made time in his acceptance speech to say Robert Lewandowski deserved his own Ballon d'Or. But apparently Messi didn't think the Bayern star deserved the FIFA Player of the Year award, leaving Lewandowski off his three-player ballot entirely.

In the end, it didn't matter. Lewandowski still won his second straight Best FIFA Men's Player award after outlasting Messi and Mohamed Salah in the voting, which is decided in four equal parts by fans, media representatives, and the captains and managers of national teams.

As Argentina captain, Messi voted for PSG teammates Neymar and Kylian Mbappé for the top two spots on his ballot, while putting Real Madrid striker Karim Benzema third. He has traditionally stayed away from voting for Cristiano Ronaldo on his ballot, only doing so in 2018 and 2019.

Meanwhile, Ronaldo, voting as Portugal captain, left Messi out of his top three, which also had Lewandowski listed as his top choice. Last season was the first and only time Ronaldo had included Messi in his voting, with the two individual rivals making a habit of snubbing each other.

As for the winner, Lewandowski, as Poland captain, voted for Euro 2020 and Champions League winner Jorginho first while putting Messi second and Ronaldo third.

Salah, the third-place finisher, voted as Egypt captain for Jorginho, Messi and Lewandowski.

While Messi more than doubled Lewandowski's points in the fan vote, the Bayern star was the overwhelming leader in coach, captain and media votes after a year in which he broke Gerd Müller's single-season Bundesliga goalscoring record.

Despite having two finalists—and the winner—for The Best Women's Player, Barcelona Femení has reason to feel slighted. Manager Lluís Cortés finished behind Chelsea's Emma Hayes in The Best FIFA Women's Coach award despite winning the two domestic trophies and a UEFA Women's Champions League title—the latter of which came in a 4–0 rout of Hayes's Chelsea in the final. Hayes's domestic treble was enough for the voters—even she was surprised when the award was announced—and Chelsea completed the double on the coaching front with Thomas Tuchel winning The Best FIFA Men's Coach by an overwhelming margin over Italy's Roberto Mancini and Manchester City's Pep Guardiola.

Beyond that, no Barcelona Femení players were voted into the FIFPro World XI, which is voted on exclusively by players. U.S.'s Carli Lloyd and Alex Morgan made the cut, while the three Best Player finalists—Putellas, Barcelona's Jenni Hermoso and Chelsea's Sam Kerr—were all omitted.

But at least Barcelona Femení's Irene Paredes, who voted as Spain captain, had her teammates' backs, voting Putellas and Hermoso in her top two spots, respectively. Spain women's coach Jorge Vilda Rodríguez did the same.

Frankfurt Tastes Glory Again in a Throwback of a European Final

A report suggested that Lionel Messi would play for Inter Miami in 2023 and acquire 35% of the club in the process, but it was quickly denied by both sides.
MIAMI, FL・2 DAYS AGO
Sports Illustrated

The landmark deal runs through 2028 and equalizes World Cup prize money from FIFA, which had been a big sticking point for the U.S. women in their negotiations.
MLS・1 DAY AGO
Sports Illustrated

Patrick Vieira did not comment on the incident after the match.
PREMIER LEAGUE・10 HOURS AGO

Silver: “Our number one priority is her health and safety, and making sure she gets out of Russia.”
NBA・2 DAYS AGO
Sports Illustrated

The Bayern Munich prospect is changing his international allegiance to represent his father’s birth country, which could mean big things for the U.S.
UEFA・17 HOURS AGO
Sports Illustrated

The race was canceled before the season began after Russia invaded Ukraine.
MOTORSPORTS・1 DAY AGO

Merseyside police have said they are looking into an incident at Everton on Thursday night in which Patrick Vieira appeared to aim a kick at a man taunting him. The Crystal Palace manager was involved in a confrontation with a fan on the pitch after his side’s 3-2 defeat, when Everton supporters invaded the playing area to celebrate their team avoiding relegation. The Football Association confirmed it was also looking into the incident involving Vieira.
PREMIER LEAGUE・9 MINUTES AGO