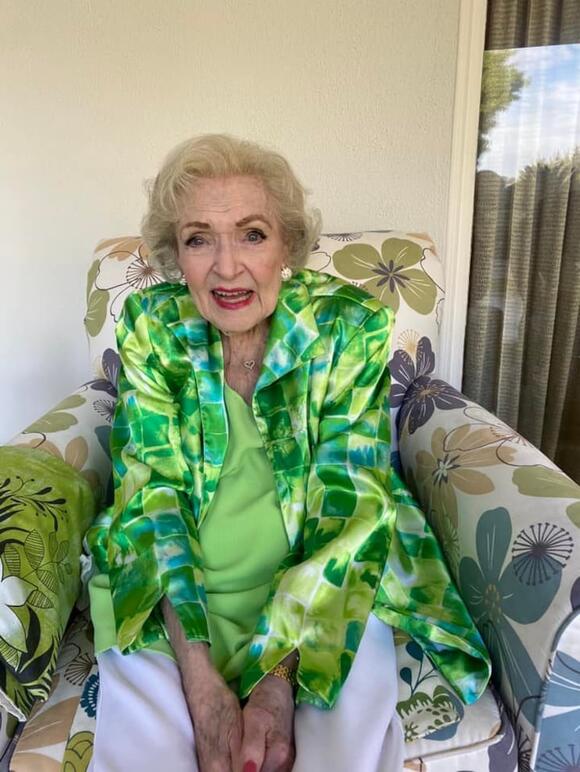 Betty White would have celebrated her 100th birthday today.

In honor of the occasion, her assistant Kiersten shared a photo of Betty taken less than two weeks before her passing. Kiersten wrote on Betty’s Facebook, “It was taken on 12/20/21. I believe it’s one of the last photos of her. She was radiant and beautiful and as happy as ever. Thanks to all of you who are doing kind things today and every day to make the world a better place

“Extra's” Rachel Lindsay recently spoke with director Steve Boettcher, who saw Betty the same day that the photo was taken for the documentary tribute “Betty White: A Celebration.”

He shared, “We actually filmed a short element for the film in Betty’s home on December 20.”

“She looked amazing, she looked beautiful,” Boettcher recalled. “She was just really happy about just going to work, if you will.”

It was recently revealed that White died from a cerebrovascular accident, which is a medical term for stroke when blood flow in the brain is impeded by a blockage or rupture of a blood vessel.

According to her death certificate, White suffered the stroke six days before her passing, which would mean Christmas Day.

A source told TMZ that White was alert and coherent after suffering the stroke.

White died on December 31, less than three weeks shy of her 100th birthday.

I shared the news with my daughter when I first heard that Betty White had passed on. My daughter’s reaction was perfect. She said wow, I can’t believe everyone’s grandma is gone. I told her you’re right! Betty White was everybody’s grandma.

I’m gonna miss that wonderful lady I lost my mom last year we watched golden girls all the time reruns of course! My mom was 88 when she passed away! I used to tell my mom when she got depressed about her age I use to tell her look how good Betty white is doing, it would always cheer her up! RIP Betty!!!

She still looked beautiful, classically put together & natural at nearly 100, I believe it was because she was a beautiful person inside all the years of her life..

Click here to read the full article. It seems like everyone was rooting for Renée Zellweger and Ant Anstead to get together, including an unexpected duo: the Property Brothers. Drew and Jonathan Scott recently revealed that they were the ones that ended up getting Zellweger and Anstead to meet, and subsequently fall in love. And their hard work ended up paying off! Back on April 14, 2022, the Scott brothers sat down with ExtraTV to talk about everything from Drew’s upcoming fatherhood to Jonathan loving GF Zooey Deschanel’s Vanity Fair gown. While we loved the entire interview, we’re losing it over...
CELEBRITIES・23 DAYS AGO
Outsider.com

On Monday (April 25th), long-time “Wheel of Fortune” co-host Vanna White took to her Instagram account to announce her cat Stella passed away. The feline was 16 years old. “My sweet Stella has gone to kitty heaven,” Vanna White declared in the social media post, which features a snapshot of her kissing the cat. “I miss her so much and will cherish the special memories of the 16 years we had together.”
PETS・21 DAYS AGO
ComicBook

After weeks of silence, Chris Rock has finally addressed his now-infamous incident with Will Smith at March's 94th Annual Academy Awards. During another sold-out show at Baltimore's Lyric Performing Arts Center on Friday, Rock directly referenced the slap, but only spent a second on it before moving on with his set.
BALTIMORE, MD・22 DAYS AGO

The Today Show stars, including Hoda Kotb, Savannah Guthrie, and Craig Melvin, are reeling from the death of a beloved fellow Today host, one whose hiring onto the show made history at NBC studios. The co-hosts took a moment out of Monday morning's show to honor the legacy of Jim...
CELEBRITIES・22 DAYS AGO
extratv

The star announced her pregnancy on Instagram with photos of her ultrasound. She wrote in the caption, “I know that I have been very quiet these past few months so I thought I would share with you all as to why… I am over the moon to announce that I am going to be a Mumma. To say that I am happy does not quite cut it. I am ecstatic! 🤰💜”
CELEBRITIES・5 DAYS AGO
People

Megan Fox wants her kids to express themselves however they please. In a wide-ranging interview with Glamour U.K. for their April cover story, the 35-year-old actress opens up about how she teaches her children, Journey River, 5, Bodhi Ransom, 8, and Noah Shannon, 9, about gender identity and encourages them to be confident in who they are.
FAMILY RELATIONSHIPS・20 DAYS AGO
People

90 Day Fiancé stars Anna-Marie Campisi and Mursel Mistanoglu have added a little boy to their family! The couple, who tied the knot on Season 7 of the TLC reality show, announced on Instagram this week that their son, Gokhan John, had been born via a surrogate on Monday, April 11 after the couple's initial struggle with fertility.
FAMILY RELATIONSHIPS・21 DAYS AGO
bravotv.com

Porsha Williams and her fiancé, Simon Guobadia, have been busier than ever planning their upcoming nuptials, as The Real Housewives of Atlanta: Porsha's Family Matters couple previously opened up about "going big" on their special day. Now, Porsha is giving a glimpse at her bridal party ahead of her...
ATLANTA, GA・21 DAYS AGO
Complex

Benzino is once again airing out some family business. After previously calling 50 Cent the “first hip-hop rat,” and getting into various other conflicts with his daughter Coi Leray, the rapper has now name-dropped both of them in a Twitter tirade. On Sunday, Fif took to Instagram to...
CELEBRITIES・21 DAYS AGO
Outsider.com

“NCIS: Los Angeles” star Daniela Ruah absolutely killed it on the red carpet and stage last night at the International Portuguese Music Awards. While everyone at home was preparing for tonight’s “NCIS: Los Angeles” episode, Daniela Ruah was getting all dressed up to host the IMPA Awards. The ceremony took place at the Providence Performing Arts Center in Providence, Rhode Island, on Saturday, April 23.
LOS ANGELES, CA・23 DAYS AGO

It seems Coi Leray is getting fed up with the drama. She and her father, Benzino, have not seen eye to eye for quite some time, and despite numerous attempts to mend their relationship, they keep ending up back at square one. Yesterday, 50 Cent, whose been feuding with Benzino...
CELEBRITIES・22 DAYS AGO
The Independent

A woman has revealed several “red flags” that she found in the apartment of the man she’s dating, which included two books about pregnancy and a woman’s ring.In a recent video shared to TikTok, Devin, @discoveringdevin, filmed herself sitting on a bed and putting her thumb down, as the text reads: “Red flags in his apartment.”She then began by showing four Apple MacBooks, all placed on top of each other, on a desk. “Four laptops…what are you hiding?” Devin wrote in the text over the clip.Next, she documented what appeared to be a “girl’s ring” on a white shelf....
RELATIONSHIP ADVICE・21 DAYS AGO
Newsweek

While Pratt has never publicly expressed his views on sexuality, his links to a church that has been accused of supporting conversion therapy and being anti-LGBTQ have made him a target for online criticism.
MOVIES・22 DAYS AGO
Outsider.com

She’s definitely embracing the Hawaii lifestyle, and now “NCIS: Hawai’i” star Vanessa Lachey is showing off her everyday surrounding to her Instagram followers. “Hawai’i = Home,” Vanessa Lachey declares in her latest social media post. The “NCIS: Hawai’i” star also shares a snapshot of her sitting in a breathtaking area in Hawaii.
HAWAII STATE・21 DAYS AGO
Outsider.com

Geroge Wendt, who played Norm on the classic TV show Cheers, decided to be like Jack when he was in public. We mean Jack Nicholson here. The famed movie actor seemingly did not mind being noticed when out among the non-Hollywood crowd. Nicholson’s attitude about this did ring a bell for Wendt during his show’s incredible run on NBC and in reruns today.
CELEBRITIES・21 DAYS AGO
PopCrush

90 Day Fiancé: Before the 90 Days star Johnny Chao is showing off a new look on social media. The reality TV star rocked a fresh-faced look on the show. However, Chao debuted some new facial hair in his most recent post on Instagram. More specifically, he grew a beard and mustache.
TV & VIDEOS・20 DAYS AGO
Popculture

Spring is always a big time for engagements and weddings, and two beloved internet personalities are the latest to update their relationship status. On April 18, Rachel "Seltzer" Quirico revealed she and longtime boyfriend Trevor "TorcH" Housten were tying the knot after 17 years together. Both of them are beloved figures in the esports world, with Seltzer notably starring in the Syfy reality show WCG Ultimate Gamer. She's also hosted numerous esports tournaments and events for TV/streaming outlets; she also made a recent appearance on G4 TV's Boosted.
RELATIONSHIP ADVICE・21 DAYS AGO
extratv

The Baldwins have another baby on the way, and they just announced the gender with help from their little ones. Alec and Hilaria enlisted Carmen, 8, Rafael, 6, Leonardo, 5, Romeo, 3, Eduardo, 18 months, and Lucia, 13 months, to help reveal their seventh child is a girl!. Hilaria posted...
FAMILY RELATIONSHIPS・7 DAYS AGO