Hawks are struggling with chemistry 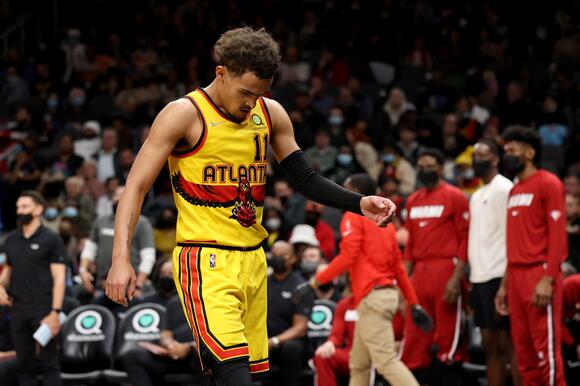 The Atlanta Hawks have been struggling, especially as of late. They have stumbled to a disappointing eight games under .500, including their last ten home games and all five of their last matchups. Terrell Thomas joined Sam & Greg to discuss this Hawks team that has been continuing to dip in the Eastern Conference standings.

Some of those things are explainable though as the team has suffered through numerous injuries to key players and one of the most ravaged rosters due to COVID-19 Health & Safety Protocols. With many of those players making their way back to the active roster, how much longer will the team struggle?

What Thomas sees is a glaring lack of chemistry. Ironically that same thing is what propelled the team forward in the second half of last season and through the playoffs. "We've seen it over the last two months that the chemistry just hasn't been there."

That may return in time, or we could continue to see the organization make trades to size up this roster. Cam Reddish has already been dealt for a bench player and a first-round pick with many speculating that the team is far from finished on that front. In theory, the team should start to see an improvement with the addition by subtraction, but this is increasingly looking like it won't be taken care of with an overnight fix.

Despite their struggles, Terrell Thomas is still confident that the team can right the ship. It's a talented bunch and the upcoming home stretch could do them some good, especially if they can end the dreaded losing streak at State Farm Arena. "I'm hoping that they get right on this home stretch," he said, "Because it's something they need urgently."

The stretch will start with a tough opponent as the Hawks welcome the Milwaukee Bucks to town tonight, but the team had better get back to their winning ways before it's too late.

Should the Hawks “kick the tires” on Ben Simmons?

The Atlanta Hawks will be actively looking to add star caliber players to the roster, but will Ben Simmons be an option they should consider with the latest news on his bad back.
ATLANTA, GA・16 DAYS AGO
92.9 The Game

Brad Rowland, host of the Locked On Hawks Podcast, told Chris Goforth on The Jon Chuckery Show Wednesday night that there are three players the Atlanta Hawks don’t really want to trade unless it’s for another star player.
ATLANTA, GA・2 DAYS AGO
92.9 The Game

Will the Hawks make a run at Kevin Durant this summer?

Andy Bunker talked about the idea of the Atlanta Hawks making a run at superstar forward Kevin Durant with reports coming out that the Brooklyn Nets may not be interested in signing Kyrie Irving to a long term contract.
ATLANTA, GA・1 DAY AGO
92.9 The Game

Which NFL rookie has the most pressure on them in 2022?

Andy Bunker talked about the NFL rookies with the most pressure on them in 2022 including Atlanta Falcons 8th overall draft pick Drake London, Kenny Pickett, Travon Walker, Aidan Hutchinson and Kayvon Thibodeaux.
ATLANTA, GA・2 DAYS AGO

Spencer Strider continues to impress in his limited role, but are the Braves making the most out of his outstanding play? Is it time for an expanded role for the young pitcher?
ATLANTA, GA・1 DAY AGO
92.9 The Game

Will a Falcons RB rush for over 1,000 yards this season?

Jon Chuckery and Hugh Douglas discuss the possibility that one of the Falcons running backs can separate themselves and become a dominant back for Atlanta this season.
ATLANTA, GA・1 DAY AGO
92.9 The Game

Kyle Wright put forth yet another strong outing for the Braves, but once again his offense failed to show up as the Braves put up only one run. Wright has been great, but he needs some help to win games.
ATLANTA, GA・20 HOURS AGO
92.9 The Game

Could the Atlanta Falcons have FOUR All Pro's in 2022?

Jon Chuckery and Hugh Douglas discuss four Atlanta Falcons players and if they can become All Pro in 2022 after the team had zero All Pro’s in 2021.
ATLANTA, GA・2 DAYS AGO

Will Braves’ bats and pitching sync “Wright” on time to pick up first three-game win streak?

As the Braves prepare to close out their four game series with the Philadelphia Phillies, with Kyle Wright scheduled to take the mound on Thursday, Atlanta is positioned to with three consecutive games for the first time this season.
ATLANTA, GA・2 DAYS AGO
92.9 The Game

Chris Goforth makes his bold Atlanta Falcons prediction for 2022 and explains why he thinks the Atlanta Falcons will double or more than double their sack total from last year.
ATLANTA, GA・9 HOURS AGO