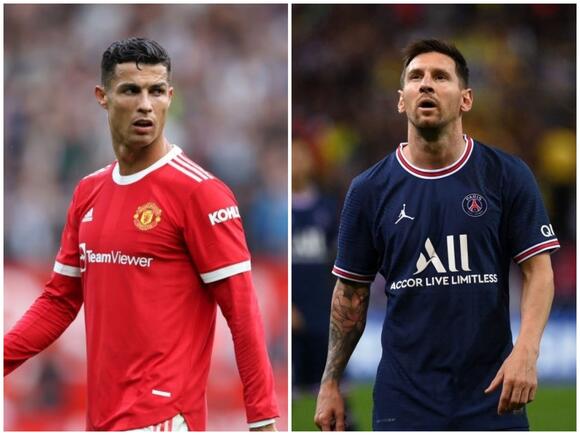 Cristiano Ronaldo and Lionel Messi were both included in the men’s world XI team of the year alongside Erling Haaland and Robert Lewandowski – winner of the men’s individual prize – in a front four.

Meanwhile Barcelona players were surprisingly omitted from the women’s team, despite Barca and Spain midfielder Alexia Putellas winning the women’s player of the year award. The team did however include England and Manchester City defender Lucy Bronze. “I don’t think I can put words to be in this team, to be a role model for girls and boys across the world,” she said.

The world XIs were voted for by players around the world. The goalkeeper, three defenders, three midfielders and three forwards with the most votes were automatically entered into the team, with the final spot in the XI going to the next player with the most votes from any position – hence why the men’s team ended up with four strikers.

Chelsea claimed both coaching prizes as Thomas Tuchel and Emma Hayes won the men’s and women’s awards respectively, while Edouard Mendy was named men’s goalkeeper of the year.

Tuchel was named men’s coach of the year after steering his club to Champions League glory last season. The 48-year-old German replaced Frank Lampard at Stamford Bridge in January 2021 and had an immediate impact, starting his spell with a 14-game unbeaten run.

Hayes, 45, guided the Blues to Women’s Super League and League Cup glory last season and steered the London side to the Champions League final. She was named WSL manager of the season for her feats and was awarded an OBE in the New Year Honours for services to football.

Mendy, 29, is in his second season at the Premier League club after joining from Rennes in September 2020. The Senegal international had been nominated for the award alongside Italy and AC Milan’s Gianluigi Donnarumma and Germany and Bayern Munich’s Manuel Neuer.

Chile’s Christiane Endler, who joined Lyon from Paris St Germain in June 2021, was named women’s goalkeeper of the year.

Todd Boehly on the verge of officially completing Chelsea takeover

Chelsea’s sale has teetered on the brink of completion, with the Government close to issuing the new licence to sign off on Todd Boehly’s £4.25billion takeover.Government chiefs had hoped to wrap up the Stamford Bridge club takeover on Tuesday night, but the US magnate’s purchase should still have time to go through in the coming days.The Premier League confirmed Boehly and his consortium partners have passed the organisation’s owners’ and directors’ tests and that just leaves Government ratification as the final takeover step.“We now believe everyone will be ready to issue the necessary licences,” said a Government source.“The last remaining...
PREMIER LEAGUE・2 HOURS AGO
The Independent

Nine-time Wimbledon champion Martina Navratilova has expressed her bemusement at talk star players may snub the Championships this summer due to the lack of ranking points.It was confirmed on Friday the WTA and ATP would not offer any points for the All England Club tournament after Wimbledon chiefs made the decision to ban Russian and Belarusian players from competing due to the war in Ukraine.Former world number one Naomi Osaka hinted on Monday she may skip the third grand slam of the season while even Briton’s Cameron Norrie conceded the Championships had been reduced to “almost an exhibition”.“First of all...
TENNIS・3 HOURS AGO